Nuance reports Q4 results: revenue up 28 percent, adjusted EPS $0.51 vs. $0.42, beating expectations of $0.48. In the earnings call, Chairman and CEO Paul Ricci said the company’s healthcare business will generate more than $1 billion in 2013, making the company one of the largest HIT vendors. He also said that the recent Quantim and JATA acquisitions will contribute $90-100 million in annual revenue.

From Samantha Taggart: “Re: giving thanks. I am very grateful and thankful to all of you for doing what you’ve done for this (our/my/your) industry. Healthcare is a precious thing and I can’t imagine what HIT would be like today if you all hadn’t somehow provided the transparency and insight into what’s really going on in this industry. We ALL thank you so very much. Enjoy your holidays and feel very good about what you do.” On behalf of Mr. H, Dr. Jayne, Dr. Travis, Dr. Gregg, Donna, and Lt. Dan, a big thank you for the kind words. I will save this note for those days I find myself thinking I can’t possibly read one more thing about healthcare and technology. I am thankful that I lucked into the greatest job ever in HIT, that I work with such fun and smart people, and that people continue to read and support HIStalk week after week. Best wishes to all for a great holiday. I’m off for the rest of the week off to spend time with family and friends, eat too much food, watch some football, and perhaps buy a couple of pairs of new shoes.

From MDRX Scrooged: “Re: Allscripts. Everyone is expecting huge cost cutting if Allscripts is sold to a private equity firm, but what may not be expected is that the cost cutting will start in the next couple of weeks. Between 70 and 130 employees will be let go, mostly from services and engineering. Happy holidays to us!” Unverified. I’ve received a few rumors on where the possible acquisition stands, pretty much split between: (a) talks are at an impasse because the PE people won’t pay above $15 per share and the board won’t accept that offer with shares trading at $12.35, and (b) a deal has already been finalized but not yet announced. In other words, I don’t know any more than you do.

From Force Majeure: “Re: Allscripts. A practice that requested termination of its MyWay agreement was turned down even though its contract says Allscripts will comply with any CMS requirements to meet MU and any other standards, with the explanation that the practice was offered a free upgrade to Professional. What about costs for infrastructure, equipment, and possible lost productivity? The contract didn’t say they company will meet the requirements by making the customer switch products. They’re going to be flooded with these requests.” Unverified, but FM provided a copy of the purported e-mail above, where the company takes the position that moving a customer to a completely different product than the one they bought is contractually acceptable since it’s a free switch to a more expensive product. I think I’d probably side with the company legally, although as a customer I’d still be ticked that I have to spend money and energy because of the company’s business decision. Obviously your options as a customer are limited if you recently signed up for the five-year lease – you’re going Professional unless you’re willing to lose a lot of money (either by not collecting Meaningful Use money or in paying off your lease while buying a competitor’s product). I assume the leases work like they do for a consumer transaction – a third-party financing company buys the contract at a discount and handles the payment collection, meaning it’s not up to Allscripts to let customers out of their lease agreements. Leasing terms might make an interesting topic for Bill O’Toole in a future HITlaw column given this example.

From Nasty Parts: “Re: [company name omitted]. They were apparently shocked to see former employees working for competitors at MGMA and offered a bounty to current employees to identify them so they can be send cease and desist letters.” Unverified. I’m sure someone must have proof if this claim is accurate, so I’ll fill in the blank if someone will provide that proof.

I will most likely not do news this Friday unless I get bored since I doubt anyone would read anyway. Enjoy your holiday. I’ll be back at the keyboard Saturday as usual putting together the Monday Morning Update.

Shades of McKesson-HBOC: shares of the perpetually bumbling HP drop 12 percent Tuesday after the company announces that it will take an $8.8 billion write-down on its 2011 acquisition of British software vendor Autonomy. HP says Autonomy had cooked its pre-acquisition books by counting low-margin hardware sales as software income and claiming that resellers were customers. Details have been shared with US and British regulators to pursue criminal and civil charges. If HP is right, nice work by Deloitte, to whom it paid big money for pre-acquisition due diligence. The previously fired CEO of Autonomy denies everything, defers to Deloitte’s audits, and says HP destroyed the company’s value by raising prices and lowering sales commissions, adding that, “The difficulty was that the company [HP] needed a strategy, and I still couldn’t tell you what that is.” HP’s now-irrelevant Q4 numbers: revenue down 5 percent, adjusted EPS $1.16 vs. $1.17 but more dramatically –$3.49 vs. $0.12 including the write-down. The ugly five-year chart above plots HP shares (blue) against the Nasdaq index, indicating that you’d probably have been better off burning dollar bills to keep warm. Oracle was smarter: they passed when Autonomy made a “please buy us” pitch – see the hilarious Another Whopper from Autonomy CEO Mike Lynch post from September 2011 on Oracle’s site, placed there after Lynch denied trying to convince Oracle to buy his company. The always-feisty Oracle, in response to his denials, posted the PowerPoint slides Lynch used in the meeting, which seemed to jog his memory of the conversation.

The National Football League signs a 10-year contract worth $7-$10 million with eClinicalWorks to implement an EHR that can help the league research and treat player head injuries. 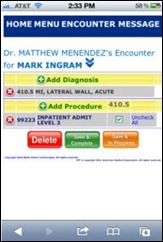 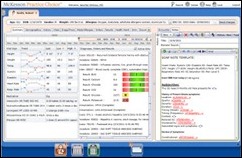 McKesson will give $1 million in free Practice Choice EMR licenses to 100 small-practice physicians who practice in primary care, internal medicine, gynecology, or pediatrics and who have a history of providing unreimbursed care to low-income patients. 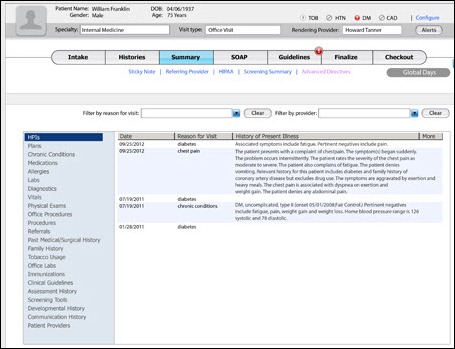 Children’s Hospital Association goes live a contract with Baltimore-based mdlogix to provide an informatics platform that will support its Hospital Survey of Patient Safety tool.

The GAO finds that CMS is behind schedule on the implementation of its Fraud Prevention System for analyzing Medicare claims data for fraudulent behavior. 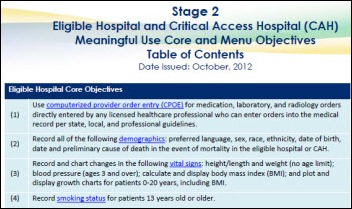 The Tampa paper covers the power struggle between dueling startup HIEs, the state-run one and a local, for-profit HIE that has the Hillsborough Medical Association as a member. The article suggests that the organizations are fighting for the potential profits involved with selling HIE-collected de-identified patient data. The local HIE says the state HIE is not seeking physician input, noting that the average hospital doesn’t see most of the patient population and also generates only 10 percent of patient health records. 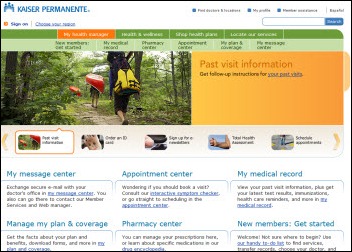 A JAMA-published study finds that patients using a patient portal had a higher number of office visits and telephone encounters than non-users. The study, which reviewed the use of MyHealthManager by patients of Kaiser Permanente Colorado, concludes that just putting up a portal doesn’t reduce demand for clinical services, and in fact may have the opposite effect. 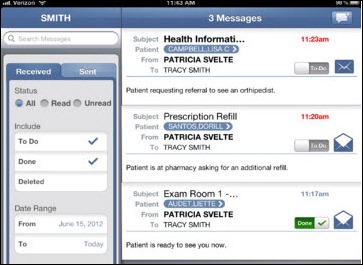 ADP-AdvancedMD introduces a charge capture app for EHR for use on the iPad and iPad mini. 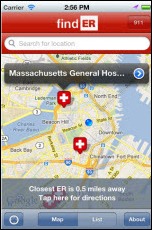 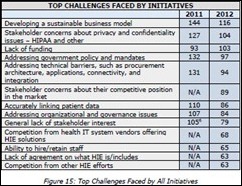 Key findings from the eHealth Initiative’s 2012 Report on HIE: 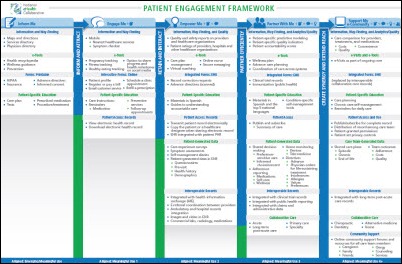 The National eHealth Collaborative publishes a five-tier framework of strengthening patient engagement strategies that includes steps entitled Inform Me, Engage Me, Empower Me, Partner With Me, and  Support My Community.

An Imprivata roundtable on the healthcare impact of technology and mobility featured Boston-area healthcare IT executives, with their discussion summarized in the eight-minute video excerpt above.

Weird News Andy says “This doc was da bomb.” A 60-year-old doctor and Occupy Wall Street protester who was fired by his hospital employer in 2007 for suspected stalking of a nurse is arrested when police find assault rifles and large quantities of bomb-making chemicals in his basement.