Allscripts files a protest against New York City’s hospital system after losing a $303 million contract to Epic. Allscripts claims that its solution would be $700 million cheaper over 15 years than the $1.4 billion total cost to implement Epic. The president of the Health and Hospitals Corporation, which runs the city’s 11 public hospitals, said Allscripts’ coast analysis was false and unrealistic and the selection of Epic came after four years of consideration and analysis of nine different vendors.

From Straight Arrow: “Re: Allscripts NYC protest. Allscripts comes across as a sore loser, and trying to invoke ‘teachers and doctors’ smacks of desperation. Instead of asking the health system why they chose Epic (they mention Allscripts’ history of management and financial problems) they should have left well enough alone. Nobody ever wins these challenges and cooler PR heads should have prevailed; now the market smells Allscripts’ fear.”

From HitTheRoad: “Re: Allscripts missteps. In the New York Times article, Glen Tullman is quoted as saying Epic’s ‘language is more expensive to maintain.’ That is perhaps the least-informed comment ever uttered by a vendor CEO. That comment, their bizarre bid, the MyWay announcement, and the baiting of a former prospect in a public debate that they are bound to lose in an embarrassing fashion could easily mark the beginning of the end of Allscripts.”

From MDRX Knows: “Rumor: Re: MyWay Rescue Program and Allscripts Buyout. Good for Aprima to step in and try to capitalize on a poor move by Allscripts to shut down MyWay. Converting MyWay clients to Professional is laughable. Professional is embroiled in enough trouble of its own without taking on more clients, including a lack of product functionality and overall application inefficiency. Perhaps if the buyout is successful, Glen and company can take the opportunity to clean the Professional house and actually make it the product they claim it to be, not the one they are currently selling.” 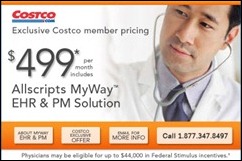 From Nasty Parts: “Costco. Word on street is that Costco is going to file a lawsuit against Allscripts over the whole MyWay fiasco. Costco is sitting on a good number of licenses that are not moving, especially with the recent news.” eTransmedia, the Allscripts reseller that owns the Costco relationship, declined to comment.

From Tracker: “Re: VA RTLS The previously announced VA RTLS award of ‘up to’ $540M to HP Enterprise Services has been vacated based IBM’s successful appeal. The entire project on hold until they decide to either re-issue after rewriting the RFP; re-examine the previously submitted responses with a possible different outcome award based on that reexamination (read – work it out so more of the pie is split and the parties agree not to fight the new decision); or, put the entire project on hold. Given the political and budget variables now present I predict there will be a modest delay for now.” Last week the GAO issued the decision stating that “the VA had made several prejudicial errors in its evaluation of the offerors’ proposals. Those errors led to a source selection decision that GAO found was unreasonable since it relied on the erroneous evaluation conclusions to support the award decision.” 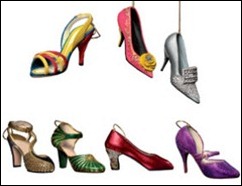 From CDiff: “Re: Advice. Asking you and the readers for help in avoiding a slippery slope. Could buying a shoe ornament be considered contributing to a shoe fetish and therefore to be avoided or one of those things that we just wink at and go ahead in the spirit of gift giving with best wishes?” How could gifting a loved one with something as amazing as these shoe ornaments be wrong? Not to mention the cost is a fraction of the cost of a new pair of Christian Louboutins (size 8, in case anyone is doing some early Christmas shopping.)

Many thanks to all the readers who sent notes or Facebook posts wishing me a happy birthday. All the greetings were lovely, but I particularly liked the sentiment expressed here:

May you have the ability to happily wear your shoes high, proud and with padded insoles where necessary!

The best gift will be Mr. H’s return, since this job is not nearly as fun without him. Though not necessarily birthday related, I will note that several readers asked for that perfect margarita recipe. Alas, I am still waiting for the cabana boy applications.

This week on HIStalk Practice: athenahealth integrates Entrada voice services into its EHR. Women’s preventative healthcare improves when providers use EHRs. Doximity grows to 100,000 verified members. Miami Children’s Hospital selects CareCloud for RCM. BetterDoctor launches its doctor-connect app nationwide. If you are still looking to give me the perfect birthday, let me make it easy on you: take a moment to sign up for the HIStalk Practice email updates and click on a few of the sponsors’ ads to learn more about their offerings. Thanks for reading. 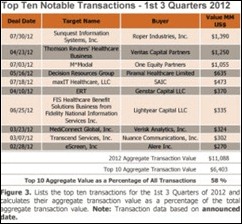 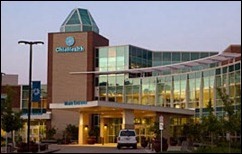 The EHR/HIE Interoperability Workgroup, the NYeC, and Healtheway establish a testing program to certify EHRs and other HIT for the reliable transfer of data within and across organizations and state boundaries.  CCHIT will perform the testing.

Kinergy Health’s MyKinergy wins the Patient Engagement Blue Button Challenge, sponsored by the ONC and The Advisory Board Company, and is awarded the $25,000 grand prize. Other finalists winning $5,000 each include Humetrix, TrialX, Jardogs, and mHealthCoach.

About 284,000 Medicare patients who are potential victims of identity theft are facing difficulties getting healthcare benefits because the government won’t issue new IDs. Medicare officials claim it’s too expensive and too many agencies are involved to reissue the cards.

Medicare’s policy to block hospital reimbursements for certain preventable, hospital-acquired infections has not significantly changed the rates of two types of infection. 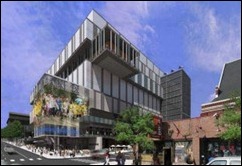 The development company overseeing the conversion of the Nashville Convention Center to a medical mart suspends the project, saying that the “leases signed to date do not yet enable the project to be financially feasible.” 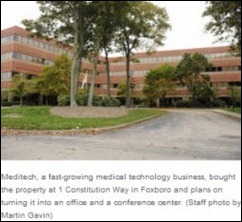 Meditech purchases a 26-acre office and conference center in Foxboro, MA for $19.8 million. The site, which will undergo renovations over the next year, will eventually employ 500 workers.

Now that 2012 is almost over, CMS has announced distribution of ePrescribing program incentives and PQRS payments from 2011. Accompanying feedback reports, manuals for interpreting the data, and guides for understanding incentive payments are available on CMS’s Quality Net portal. Don’t spend all that money in one place, folks. 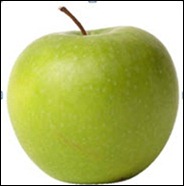 An apple a day: Inga shared this article that suggests doctors practice healthy behaviors more often than other workers in the US. I’m glad they didn’t report on doctors who have become administrators or IT staffers. I was definitely healthier when I was running around a practice as opposed to sitting in endless meetings. I think I’m going to have to start adding “stand and stretch” to my time-boxed agendas if I want to avoid getting a blood clot from immobility.

Speaking of health, I went for my physical today so I can scuba dive again. As I sat in the waiting room, my phone buzzed and it was an email from the receptionist inviting me to enroll in the practice’s patient portal and fill out my introductory health questionnaire. It’s always fun to see these things actually work in a practice. Now we’ll just have to see how long it takes before my clinical summary is available. 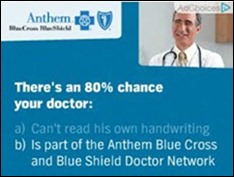 Jeers to Anthem BlueCross BlueShield who continues to recycle tired old jokes about physician handwriting. If they want something fresh and modern to pick on, let’s try poor typing skills.

I wasn’t able to attend Health 2.0 although I enjoyed reading the reflections by Dr. Travis on HIStalk Mobile. I was glad to hear that Extormity made a with their strategic plan to acquire every application developer in attendance.

Today is my BFF’s birthday, so if you haven’t done so already please take a moment to send Inga your congratulations. I hope her day is full of sassy shoes and adoring fans.