On May 22, ONC and the National Institute of Standards and Technology (NIST) jointly sponsored a workshop in Gaithersburg, Maryland on Creating Usable EHRs: A User-Centered Design Best Practices Workshop.

If any major vendor CEOs had attended, I think they would have come away with the mission to make EHR usability, defined broadly, a top priority of their organization.

In his opening remarks, Farzad Mostashari, National Coordinator for Health Information Technology, noted that when talking with clinicians across the country, the number one issue he hears is that their EHR is unusable, that "the system is driving me nuts."

Broadly speaking, EHR usability is about suiting EHR design to human requirements and abilities, not the other way around. I’ll start by giving three examples.

Administering amlodipine to a neonate when amiodarone was intended is an error with potentially fatal consequences. One can see how a neonatologist might confuse the two, especially in a high-stress clinical setting.

As part of his talk, Bentzi Karsh, Professor of Industrial and Systems Engineering at the University of Wisconsin-Madison, conducted an audience-participation experiment by presenting the same data set in two different formats. (The 2 figures that follow are printed with permission from Sue M Bosley, PharmD, CPPS.) Our task was to determine as quickly as possible how many of the lab values were outside the normal range for the patient below. Try it: 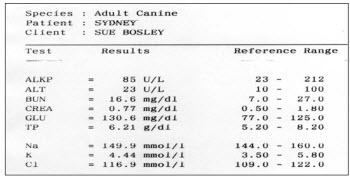 In the view above, it took us anywhere between 15 and 45 seconds to determine the number of out-of-range labs and 20% of us came up with the wrong number. Furthermore, we were so focused on the task at hand that not one of the 150 of us noticed that the patient was a dog.

Then the same data was presented in a format better optimized for visual processing: 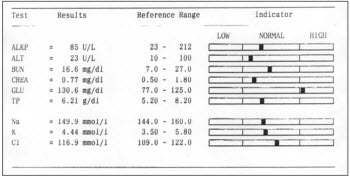 Using the visual display of the same information, we all identified the out-of-range lab value in less than 3 seconds and there were no errors.

The third example comes not from a presentation, but from a conversation over lunch with fellow attendees of the workshop. Jared Sinclair, an R.N. and developer of iOS applications for bedside nursing, was telling us about a widely-used workaround that hospital-based nurses have devised to deal with an EHR design problem.

One of the major tasks of hospital-based nurses is to make sure that each patient assigned to them gets the right medications at the right time of day. The EHR medication screen view that nurses see is called a Medication Administration Record (MAR). It serves both as a schedule for administration and as a tool to document whether and when medications were actually given. Jared was kind enough to create the MAR mock-ups below (shown as an overview and then a zoomed-in view) based on the design of several widely-used EHRs: 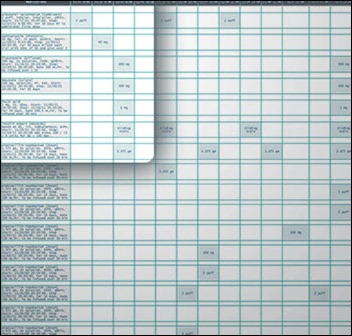 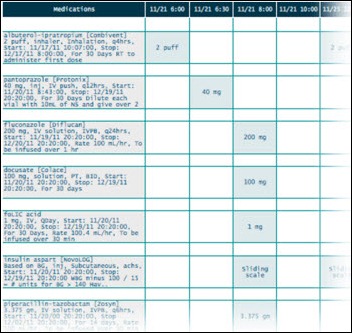 What nurses need for each patient, however, is a portable list of medications organized by the time of day those medications should be administered. Because most EHRs don’t provide this alternate view of the data, at the beginning of every shift nurses create their own paper-based lists (see example below): 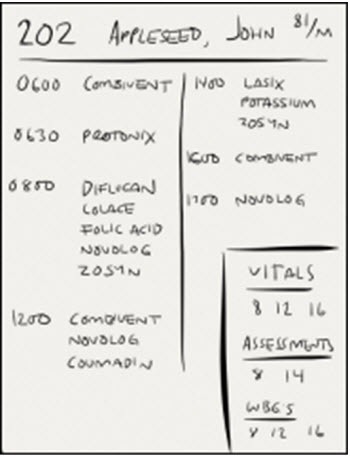 Each of the three examples above represents a disparate aspect of EHR usability. The fact that they are so different helps explain why designing usable EHRs is so difficult.

The three examples above just scratch the surface of the EHR usability problem. To better understand these issues, I recommend a superb viewpoint paper in JAMIA discussing EHR usability and related issues. The two lead authors, Bentzi Karsh and Matt Weinger,  spoke at the workshop. Their points are easy to follow. In my opinion, their paper should be required reading for vendors, administrators, and clinicians alike.

Broadly speaking, the field of usability can be divided into two parts:

While these two components can be seen as parts of a continuum, in practice it is helpful to separate them.

I was glad to see that the ONC/NIST workshop focused on User-Centered Design – the process of creating usable EHRs – as opposed to focusing narrowly on testing protocols. Of more consequence, in its March 2012 Notice of Proposed Rule Making (pp. 13842-3), ONC states that a significant first step toward improving overall usability is to focus on the process of UCD (as opposed to mandating formal summative testing).

For me, there are two major questions:

1) What exactly is User-Centered Design (UCD)?

2) What role, if any, should ONC play in regard to UCD and EHR usability?

I look forward to sharing my thoughts on these issues in my next post.