Given the significant Allscripts news and opinion, I’ve moved that into its own section at the bottom. That will make it easier for readers who don’t really care about that topic to skip it. I’m assuming the interest is out there, however, given that HIStalk had 9,600 visits and 17,000 page views on Friday, above normal.

From Bignurse: “Re: [vendor name omitted.] An absolute disaster in our state. No customer support is available. Lawsuits are being prepared. Meanwhile, patient care is at risk from systems that are crashing. I feel badly for laid-off employees, but every more alarming is customers facing the specter of systems going down forever. They need help!” I’ve left off the vendor’s name to offer a suggestion. Hopefully someone has complained formally to the vendor from at least one of those sites. Send me a copy of that document and I’ll run it here with any company response. That’s not only more fair to the company, but more useful to readers who really don’t know what’s going on.

From Susan: “Re: overall size of the healthcare IT market. Any estimates of total money spent annually by hospitals or clinics?” Maybe someone knows the answer to this question, which sounds like something Epic would ask on its famous employment test.

HITECH’s impact on patient outcomes has been modest, respondents seem to be saying. New poll to your right: if you had $100K to invest in the stock of one healthcare IT vendor, which would you choose?

Listening: the fresh and very well produced first album of Electric Guest, some LA kids cranking out a delightfully catchy mix of pop, soul, and electronic dance music that would be great for driving as long as you can control your in-seat gyrating better than I can. The low bass notes of the opening song are so strong out of my PC’s subwoofer that my Diet Coke with Lime can is vibrating across my desk like the quarterback in a 1970s electric football game. I’ve played the CD three times in a row, which is unusual for me.

Vince’s HIS-tory this time around covers the history of an innovative but trouble-prone input device that required creating an intentionally poor user interface to hide its design flaws: the typewriter. 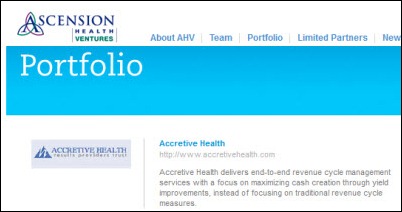 The Minneapolis-St. Paul newspaper finds that two executives of Fairview Health Services, which is taking heat for allowing Accretive Health to strong-arm its patients into paying for ED and other medical services upfront, have connections to the company. The son of Fairview’s CEO is an Accretive employee, while the son of its physician group CEO is also an Accretive employee and helped it implement aggressive collection policies. In addition, the physician group CEO was found to be a shareholder in Accretive. The fallout from Tuesday’s national press about the tactics was dramatic: by Friday, Fairview had severed all relationships with Accretive. In addition, Fairview’s board held an emergency meeting from which its CEO was excluded, but he apparently emerged with the organization’s support. The biggest question is whether it was legal for Fairview to give Accretive full access to its patient records for collection purposes. Nearly overlooked in all the debate is that Ascension Health was Accretive’s original customer and owns a sizeable chunk of the company. Accretive’s market cap after its 61% share price drop (!!) over the past month is $919 million, with Ascension Health’s equity worth $72 million.

The local business journal covers the recent Epic go-live at 206-bed Greenwich Hospital (CT), part of Yale New Haven Health System. The hospital spent $25 million ($121K per bed), according to the article, which gives the entire system’s cost as $250 million. 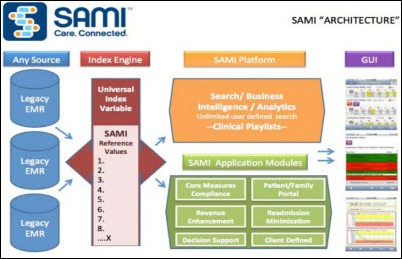 Yale New Haven is also mentioned as using the SAMI system from local startup MyCare, LLC, a product described as having capabilities for EMR searching, alerting, a rules engine, and analytics. 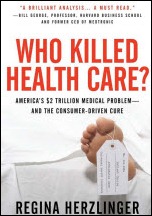 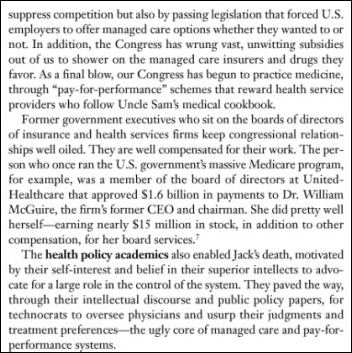 Harvard Business School healthcare expert Regina Herzlinger says accountable care organizations and patient-centered medical homes will go down in flames just like the 1990s capitated HMOs that preceded them, with the key problems being (a) inefficient EMRs, (b) awkward team culture, and (c) challenges in developing public health insurance exchanges. Instead, she advocates a focused factory model, where instead of providers taking on whatever problems cross their doorstep, they focus on particular health conditions, such as diabetes. She’s written such books as Market Driven Health Care and Who Killed Health Care? She blames today’s healthcare mess on hospitals consolidating to eliminate competition, bureaucratic insurance companies with wildly overpaid CEOs, and federal government meddling.

Weird News Andy’s joke: How do you make a Phillips screwdriver? Mix vodka with milk of magnesia (cue rim shot). That’s to celebrate this story, in which a Kentucky woman is suing her dentist, claiming she needed abdominal surgery to remove a screwdriver he dropped down her throat while repairing her dentures.

From Stock Boy: “Re: Allscripts. This was a when, not an if. HCIT rollups never work. The coup could have gone either way – one vote and it could have been Tullman’s blood running through the Merchandise Mart. Investors are also afraid that another shoe will drop, like whether Lee Shapiro survives or even wants to. Clients have been angry – I’ve heard that Tullman is personally banned from several high-profile Eclipsys sites. The timing of Davis’s resignation could not be worse, and naming his new firm would have eliminated one piece of missing information. Investors hate uncertainty, so the stock is likely dead money for six months. They will be doing a ‘sum of parts’ valuation. Maybe a private equity leveraged buyout would work, but it would be tough. Allscripts is in third or fourth place, but it’s still a big market, and if I invested in this sector, I’d be a buyer of MDRX. Glen is a talented CEO and can sell water to a drowning man. He’s one of the most aggressive and competitive, but within an ethical framework, I’d be disinclined to bet against him.”

From MDRX Mole Army Private: “Re: Allscripts. HIStalk access is being blocked at the Raleigh office. Good thing I have a smart phone!” Unverified and pointless in any case since I’m pretty sure employees have a variety of ways to access an unfiltered Internet on their own.

Allscripts shares closed at $10.30 on Friday, down 36% on 20 times normal trading volume as Nasdaq’s second-biggest percentage loser for the day. Market cap dropped over a billion dollars, and Glen Tullman’s wallet was $5 million lighter at dinner than it was at breakfast. Not to mention that Glen’s frequent verbal sparring partner Jonathan Bush’s athenahealth now has a bigger market cap than Allscripts ($2.61 billion vs. $1.96 billion).

My reaction to Friday’s events:

I interviewed Glen Tullman and Phil Pead about the Allscripts-Eclipsys merger the day before it was announced, asking them to give me the criteria to judge their performance two years afterward (September 2012). Here’s what Phil Pead said:

From a shareholder perspective, I would like to see you grow the top line and prove your earnings per share leverage over that period. If I was a client, I would grade you by the integration between the product solutions to make this a great experience for their hospital and ambulatory environments so that the two came together. If you were looking at it from the employees, I would want to say that the next few years will be some of the most exciting with all the new opportunities they have to plan.

If you’re an Allscripts customer, tell me what all this news means to you. Please use your real name and employer with the confidence that I will absolutely not allow you to be identified in any way, but I need to be sure I’m getting legitimate information and not an Allscripts competitor trying to pile on (it happens). I’ve heard from investors and employees, but the real unknown is what Allscripts customers think about what’s happening.