From Eric Rose MD: “Re: proposed MU rules. Like a lot of people, I get annoyed at how difficult it is to get to the actual regulatory text because the headings are embedded. I’ve extracted the actual text and marked them up with section headings. Turn on the Navigation Pane in Word and you can easily find the sections, particularly those with certification criteria or MU objectives. I created these for my own convenience, but others might find them useful. Feel free to share with the HIStalk community.” I’ve set up the certification criteria and MU objectives for downloading. Thanks to Eric, who is a clinical terminologist with Intelligent Medical Objects.

I’ve been having problems with the e-mail blast application that nobody can figure out, so I’m changing it to a hosted solution since I have no time for further investigation. The differences you’ll notice are: (a) the update notices will be HTML messages, which are a little bit nicer looking and easier to use than plain text; (b) the e-mails will look better than before when reading on mobile devices; and (c) hopefully the e-mails will go out faster and get delivered more often. I’ve learned way more than I ever wanted to know about the technical side of Exim, SMTP hosting, and server message queues and it’s not nearly as simple as just sending someone an e-mail. I’ve still got some fine tuning to do and I may need to change again if this doesn’t work as well as I’m hoping, so be patient and we’ll get through it.

Listening: Penelope Houston, one of the better female folk-rockers you’ve never heard of. She used to be singer of punk band The Avengers, but now does moody Euro-sounding 60s pop with mandolin, autoharp, some vintage Hammond B3 organ in the mix.

My Time Capsule editorial this time: US Healthcare Value is Low – Follow the Fancy Buildings, summarized by this snippet: “I’m not smart enough to figure out who the good guys and bad guys are in healthcare, so I look at just one thing: buildings. When I see stunning hospitals, vendor headquarters, insurance offices, and doctors’ houses, I figure they’re doing a little better than I’d like.”

A couple of readers chimed in on my comment about Epic implementations slipping from their aggressive, MU-driven timelines, saying they’ve heard of places having that problem. I think you’ll hear more about this. Big money at risk or not, system implementations are always harder and more complicated than they seem, and hospitals are notoriously bad at change management (although Epic leads them through it by the hand.)

This is encouraging in an “eat your own dog food” kind of way: 80% of respondents have primary care providers who use electronic medical records. My university-associated doc does and it’s made a huge difference in how my encounters work: I get accurate medication reconciliation performed at every visit with the system (even though all I take is a diuretic), he has all my history right in front of him (it’s fun to see how my weight has changed over the years, mostly because it’s gone down quite a bit), and we have avoided duplicated lab tests. The doc looks smarter, I feel like my entire health situation has been considered, and we use the on-screen information together as a teaching and planning tool. I’ll say something I would not have said a couple of years ago: I really think I’d sadly have to find another doctor if mine was stuck in the paper chart world. New poll to your right, in honor of the Mostashari vs. academic researchers flame wars: will wider EMR usage reduce the number unnecessary imaging exams? Maybe someone should just ask doctors themselves instead of trying to make inferences from sketchy data.

On the Jobs Board: Client Care Engineer, Mobility Software Engineer, Epic Inpatient Module Go-Live Support, Vice President Healthcare, Meditech CPOE Activation Support, Consultant. On Healthcare IT Jobs: NextGen Analysts and Consultants, Horizon Meds Manager Consultant, Assistant Health Services IT Director. I don’t know about your phone, but mine is ringing constantly from recruiter calls, although I do have specific expertise that’s hard to find. A lot of the calls are from folks looking for consultants.

Thanks the the following new and renewing sponsors that supported HIStalk, HIStalk Practice, and HIStalk Mobile in February (click on a logo for more information): 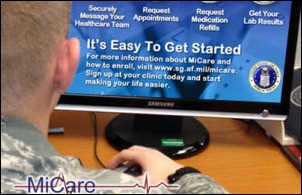 An article in the newsletter of the USAF’s Hurlburt Field describes the Air Force’s MiCare Portal, a RelayHealth-powered site that allows patients to send secure messages to clinicians and request refills, while the providers can send patients appointment reminders, results, referral information, and changes in clinic hours. The group practice manager says the goal is to make MiCare the preferred method of communication after in-person appointments, avoiding phone tag and missed handoffs. Other bases using MiCare: Hanscom, Langley, Nellis, Offutt, Scott, Seymour-Johnson, and Travis.

Weird News Andy offers his own flavor of March madness with this story, in which an enterprising urology group is offering a free pizza with each vasectomy performed in March. The practice says March is their busiest time as men figure they might as well recover on the couch while watching basketball games on TV. WNA finds the last line of the story, which describes the free pizza, disturbing: “It does actually come with one topping. Maybe you can put some meatballs on it.” He also adds his own joke: what did the urologist’s wife sing to her husband when he finished his residency? “Urine the money, urine the money, we’ll have a lot of what it takes to get along.” </rimshot>

Here’s Vince’s HIS-tory of CliniCom (Part 3.) Check out the resemblance of the 1980s-era CliniCare handheld nurse terminal to the iPad.

I remembered Friday at work to print off the Archives of Internal Medicine article that has generated all the simplistic rag headlines that meet their goal of being stupid-simple and sexy at the expense of accuracy in summarizing the original study (example: iPads: Increasing Doctor Efficiency, Decreasing Patient Wait Time). The actual University of Chicago study wasn’t nearly that conclusive. The university gave iPads to 115 internal medicine residents and taught them to use Epic on it, along with online publications and the internal paging system. Four months later, the residents were surveyed. Results: 90% were using the iPads for work (it’s interesting that 10% weren’t) and 75% of those were using them daily (meaning 38% of those given an iPad weren’t.) Three-quarters of those said they thought they were more efficient and 68% of them said they thought patient care delays had been avoided because of the iPad. Residents entered a few more (5%) orders before 7 a.m. rounds and within the first two hours of admission. Study weaknesses:

Athenahealth will hire 80 people to work at its Belfast, ME office, raising its headcount by 20%.

An article in The Atlantic says innovators develop products for people who are like themselves, which is why mHealth apps influence only the already-good health of what it calls “The Social Network” (well-educated, technically savvy, and affluent whites and Asians living on both coasts) while having minimal influence on the behaviors of the more diverse and more healthcare-expensive population as a whole. As Dr. Travis has said on HIStalk Mobile, running apps are a lot more popular with runners than couch potatoes. Or as Bill Gates says, we already have healthcare technology that tells people that they need to change their habits, but unhealthy people just ignore what it’s telling them (bathroom scales.)