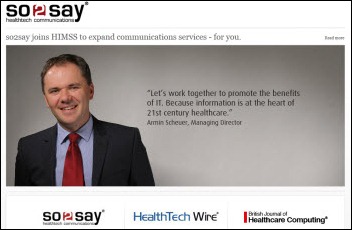 HIMSS announces its acquisition of for-profit so2say communications, a German healthcare IT news distribution company whose European publications include HealthTech Wire and the recently acquired British Journal of Healthcare Computing.

From No Surprise: “Re: Presbyterian, NM. Epic is in, McKesson loses another account. E-mail went out to employees Wednesday. Also, Lee Marley started as CIO in August, coming from Stanford.” Posted here as a rumor on August 15, but a solid one since I noticed that Presbyterian had Epic inpatient jobs posted on its site. Lee Marley’s LinkedIn profile verifies that she became SVP/CIO at Presbyterian in August after a couple of years as associate CIO at Stanford.

From Redial: “Re: [company name omitted]. Another shakeup: just days ago, [name omitted] has suddenly left as VP of business development following the sudden departure of [name omitted] in August. Senior VP [name omitted] has been moved to the side following the discovery of his romantic relationship with a subordinate. There have been other significant departments of key management personnel over the past 12 months. Something is definitely wrong at the top.” Interesting, although I’m sure the company won’t confirm most of that except by catapulting litigious lawyers in my direction if I name names. At least I can feel smug knowing who it is.

From Ask Sam: “Re: HIPAA. Obviously they don’t know how to spell it.” They clearly need a new headline writer considering that healthcare is also spelled incorrectly (the article itself spells both words right, so there’s little excuse).

From WhoBuyz: “Re: acquisition. Who could this be? The $300-500 million range sounds very large to go unnoticed.” Sources say huge India-based software and consulting firm Infosys is in discussions about buying a US “public services and healthcare space” firm for $450-500 million, with the unnamed company booking annual revenue of $300-500 million. Infosys has extensive healthcare offerings that include payor analytics, disease management, supply chain, wellness management, Meaningful Use optimization, data warehousing, and infrastructure services. UPDATE: according to several sources, the acquisition will be the healthcare business of Thomson Reuters,  at a price of up to $750 million. 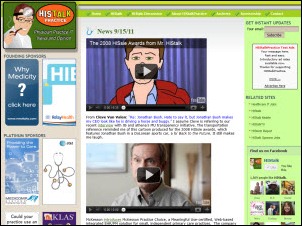 Recent tidbits from HIStalk Practice: the 2008 HISsie cartoon revisited. Telehealth saves money  in the treatment of chronically ill patients. US doctors earn more than physicians abroad. Dr. Gregg claims he is a Luddite and embraces his “onesy” status. Jonathan Bush rants about Meaningful Use attestation and his wish for his competitors’ “ethically-based suicide.” Doctors are down on AMA. World peace, a balanced budget, or better knowledge of the ambulatory HIT world are possible if you take 10 seconds to subscribe to HIStalk Practice’s e-mail updates.

Latest pet peeves: simplistic does not mean the same thing as simple (the former means recklessly oversimplifying complex concepts), nor does opportunistic mean taking advantage of opportunities (it means taking quick action that may be ethically questionable). Vendor CEOs misused both words recently in the national press, which would have cast a negative light on their companies except for the fact that their gaffe sailed right over the heads of the majority of people who didn’t know the difference.

Allscripts CEO Glen Tullman, commenting on a share price that is virtually unchanged from a year ago, says integration concerns with the former Eclipsys put MDRX in “the penalty box,” but growth is coming since the acquisition positioned the company well for the changes spurred by healthcare reform. 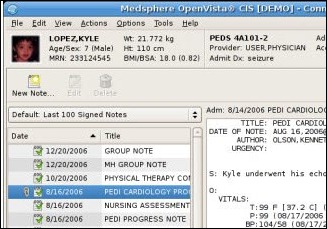 Medsphere announces general availability of its latest version of OpenVista EHR, which includes an option for users to customize their views, dashboards, and workflows.

The AMIA 2011 Annual Symposium will be held October 22-26 at the Washington Hilton in Washington, DC. Keynotes include the director of NIH and Farzad Mostashari from ONC. AMIA is a lot more science-oriented than the HIMSS boat show – I looked through the list of sessions and didn’t see any duds, provided you’re of the informatics persuasion, anyway. Full registration is $835 for non-members if you sign up by October 6. Reports from there are welcome.

McKesson integrates its iKnowMed oncology EHR with its Lynx Mobile drug inventory management system, allowing meds to be prepared in advance of the patient’s visit. 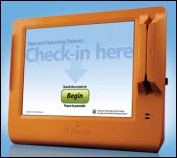 Dell Services Healthcare and Life Sciences wins a Project Management Office of the Year award for its 96% project success rate.

A CliniComp press release says that on September 11, 2001, its Essentris EMR used by Bellevue Hospital was the only inpatient one that kept running through the events of that day. I’m not sure: (a) if they’re talking about Bellevue only or all hospitals in Manhattan or New York; (b) how they know that; and (c) if using September 11 as a product pitch is in good taste. If you can get past those issues, the press release is a good read. 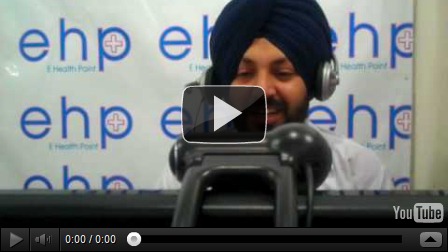 Athenahealth’s co-founders are mentioned as backers of startup Healthpoint Services, which offers “e-doctor clinics” in rural India. Athena COO Ed Park is a director. Villagers can get a telehealth consult in the office for 80 cents and diagnostic tests for $1, which the company says is affordable to the patients and break-even for it. Vital signs are taken in the office and sent to the physician and to the EMR. The company also offers a water service that gives families the ability to fill their jugs with clean water for $1.50 per month.

Hospital employees and their family members incur healthcare costs that are 13% higher than that of the general population; are 22% more likely to visit the ER; and are more often  diagnosed with chronic medical conditions. Any theories why? 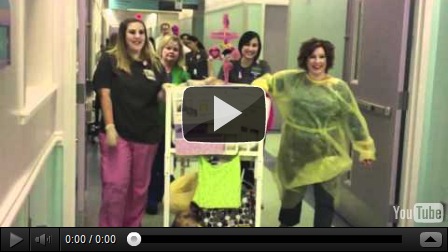 Cook Children’s Medical Center (TX) opens a 106-bed, $51 million NICU with all private rooms, the largest in the country. They cite research showing that babies do better when light and temperature can be individually controlled and when family members don’t have to leave. 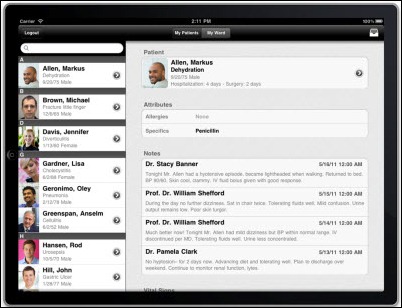 SAP will release a tablet-based EMR front end app by the end of October, according to this article. 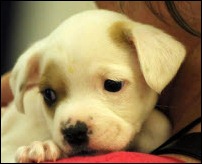 I always enjoy hearing what readers have to say. I was double delighted to find that Daniela Mahoney’s piece on CPOE also included a recipe for profiteroles with coffee ice cream. Sounds like a good project for a quiet fall night (if fall ever arrives). She mentioned upcoming thoughts on adoption and organizational culture – I hope there are recipes included.

The Healthcare Billing and Management Association began its Fall Annual Conference yesterday. Due to horribly slashed budgets in clinical IT areas, which pretty much canceled my ability to attend any meetings this year, I have to live vicariously through colleagues and friends. In the first of these reports from the field, Bianca Biller reports:

HBMA Fall Conference in Vegas, baby. Held at the Bellagio, but actually the overflow accommodations are quite fine. Staying at your fave haunt Vdara Hotel & Spa, right in the midst of CItyCenter. Over 50 new members/attendees to the Fall Conference. Played Vendor Bingo for a chance at $1,425 jackpot tomorrow evening. Best giveaway was from Gateway EDI — decks of cards and gaming instructions. Quite creative for the Vegas venue.

Started the meeting with “Hot Topics in Compliance,” but only billing geeks/nerds would be excited about this session. Good reality check reviewing HIPAA + HITECH, 5010, ICD-10, 2012 Proposed Physician Fee Schedule cuts – all specialties. And let’s not forget the proposed SGR of 29.5% cuts for 2012 along with Medicare revalidation! Is anyone thinking about our patients in all of this? It’s a great day to be in the billing business!

Despite her feelings on compliance, I’m glad Bianca is my billing geek because she definitely gets the job done. And somehow, she succeeded in NOT getting her conference budget slashed. Maybe I need her to teach me the wicked ways.

MGMA reports that 70% of practices are looking into becoming Patient Centered Medical Homes and more than 20% are already accredited by a national organization. The top five challenges:

Clinical note of the week: several studies, one of which was published in May’s Journal of Strength Conditioning Research, show that low-fat chocolate milk helps athletes recover from training, especially if you add an Oreo cookie (a favorite of billing software developers, from what I understand.) That’s data I can work with.

MSN has recommendations that should be required reading for many an e-mail user. I’ve seen some e-mail signatures lately that are doozies. For most tech industry players (Voalte excepted), hot pink isn’t a strong corporate branding strategy. Political quotes are definitely a no-no, as are annoying or flashing fonts. The next-to-last paragraph had me laughing:

At public relations group Outside media, Sammi Johnson says she and her colleagues put quotes from fictitious “Saturday Night Live” inspirational writer Jack Handy in their quotes. One employee’s signature is, “Contrary to what most people say the most dangerous animal in the world is not the lion or the tiger or even elephant. It’s a shark riding on an elephant’s back, just trampling and eating everything they see.”

At this point, I’m going to take my Oreo cookies and my glass of milk (alas, not chocolate) and run.

“To me, clowns aren’t funny. In fact, they’re kind of scary. I’ve wondered where this started and I think it goes back to the time I went to the circus, and a clown killed my dad.”