From KR: “Re: HIStalkapalooza. Let me be the first – this event has to be the highlight of the week! The awards, by Bush, were absolutely fantastic. Could not have hard a better MC. Thanks so much for a great event!” You knew it was going to be good if you watched JB waiting to go on – he was like a horse that couldn’t wait to run a race (if horses drank beer beforehand, that is). He was amazing, although he may cringe when he sees his words played back from the multi-camera video recording that was being made.

From Bobby Orr: “Re: HIStalkapalooza. Great time, big fan a good blues band, thank you. Largest  HIMSS ever over 30K attendees, but only about 9k providers is what I understood but I’ll leave that to the HIStalk  team to confirm the numbers.” They said 31K in the opening session, but I bet most weren’t providers. We’ll try to get specifics.

From Rodgrigo Barnes: “Re: Pennsylvania Health Information Exchange. Medicity contract cancelled.” Unverified. I need to get clarification from Medicity, but the purported e-mail suggests that the state didn’t like PHIX’s strategic plan or its selection of Medicity, which the e-mail said AT&T protested. Also claimed is that the contract value was about was $31.7 million, only $17.1 million of which would be be covered by federal taxpayer dollars. I’ll get more information. It sounded like budget was the big problem.

From VIP CIO: “Re: VIPs. I had the same reaction as you to the article about ‘VIP Treatment.’ The first rule of being an executive is to appear to be getting less special treatment than you are actually getting. I am e-mailing you from the VIP lounge at HIMSS. It is pretty simple, but in the mad house that is HIMSS, it is a great perk. While the lines at the coffee vendor stands are 40 people long, I was able to come in and get a free cup of hot coffee in a china mug. There is soda on ice and water, too. There are nine tables and four workstations with Internet-connected computers and printers. It is kind of quiet, people are avoiding eye contact. One more thing — ribbons are for people that lack self-esteem. I agree CMIOs are major players, but they don’t need a ribbon to prove it. If they want recognition they can carry their medical degree. Nobody in the lounge is wearing a ribbon. Again, we know that it is not good to call attention to our special treatment. Gotta go, the massage therapist is here (just kidding).” I’m a little bit miffed – I pay the same dues and conference registration fees as CIOs, so why am I an inferior HIMSS member who doesn’t get the same perks?

Thanks to everybody who came to HIStalkapalooza. Thanks, too, to Dave Lareau and Medicomp, their events and video people, BB King’s, the Insomniacs, our red carpet greeters, our shoe and King/Queen contestants, and Jonathan Bush.  I left early and will be up late, as usual, but everybody seemed to be having fun. Personally, I found JB’s beer-fueled riffs to be the funniest thing I’ve heard in a long time – better than MS3TK. Since I’m writing this after several beers, please forgive any slip-ups. I bet nobody else left the event to work several more hours — that’s my excuse. 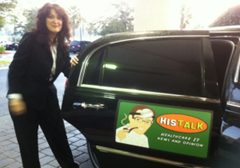 The limo will run 9 a.m until noon or so Tuesday, cruising around I-Drive. Flag it down and get a luxury ride to the convention center. I’ve ridden in it a couple of times now and it was pretty cool. That’s the very sweet Jan above who was driving today, although I’m not sure we’ll have her again tomorrow.

Medicomp gave away iPads with its new Quippe product to physicians attending HIStalkapalooza. Drop by their booth Tuesday and take a 20-minute training session and you’re in drawing for several more (both physicians and non-physicians will be chosen). I didn’t explain it well, but just stop by and they’ll fill you in.

I’m going to save all the news and other items since it’s getting really late. Here are some random observations from the day, most of them about booths.

That’s all I have time for tonight. Back at it tomorrow. Hopefully folks will send me pictures from HIStalkapalooza since I didn’t bring a camera. I believe Medicomp was planning to have video from tonight running in their booth Tuesday, so drop by.

Just a super quick post before I start my beauty regime for HIStalkapalooza! 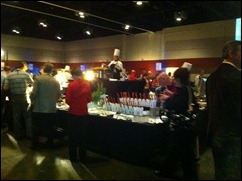 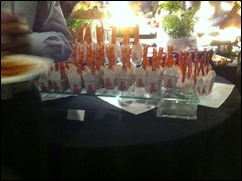 A couple of pics of the nicely presented food at the reception last night. It’s hard to cook for 20,000, but I guess it was tasty enough.The best part of the evening: hanging out with Mr. H and critiquing the whole affair. I then joined some friends for one glass of wine (the glass never went empty, so I am assuming it was only one glass). Regardless, I made it to bed probably too late, but was up at 6:00 a.m. and in time for my painfully early 7:00 a.m. breakfast. Fortunately I arrived in style in the HIStalk limo, the interior of which is probably bigger than the bathroom in my budget hotel.

I’ll provide more details on my day tomorrow, but wanted to share some additional photos from the day. 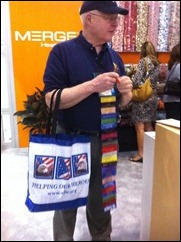 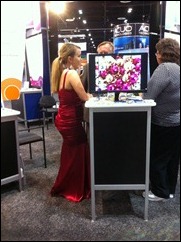 I am guessing that she was concerned she wouldn’t have time to change clothes before the party tonight, so she wore her gown to the booth. Sorry I don’t remember the vendor, but the girls were good sports. 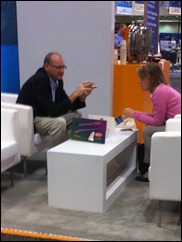 A little business meeting with the HIStalk sponsor sign prominently displayed. Thanks, iMDSoft. 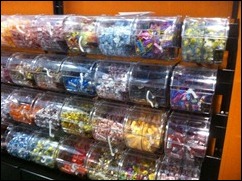 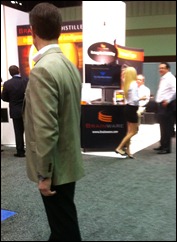 I thought the skirt was a wee short, but this guy thought it was worth looking at more than once. 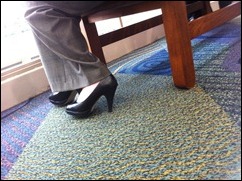 I sat on the floor for awhile recharging my phone. What’s up with the official “recharging stations” having no power connected to them? I did find that by sitting on the floor I was nicely positioned to check out shoe fashions.

Much, much more later, including HIT X 2.0, commentary on exhibits and vendors, and some gossip. Look for big announcements probably tomorrow from Microsoft, Cisco, and perhaps Gateway EDI.

I was dying to post pictures today, but with my employer locking down my Facebook, it was difficult.  Inga beat me to the knight in shining armor, but be on the lookout for lots of other photos as she and I cruised the exhibit hall together.  Let me tell you, we saw some prime photo opportunities.

My goal today was to visit all of HIStalk’s sponsors.  I didn’t make it everywhere, but I did make it to quite a few.

A couple of shout outs:

Keep your eye out for the autographed (by Mr. H and Inga) signs alerting you to vendors who are HIStalk sponsors.  Be sure to tell them you read HIStalk.  Maybe next year I’ll get here early enough to put my physician-esque scrawl on some of them.

I said I’d be visiting Merge Healthcare to check out their kiosk solution, and was happy to find their Wall of Candy as well as a nice demo of their product.  I was a little concerned by the sales rep scanning her own drivers’ license and swiping a credit card, but I guess they can control where it goes.  I wonder, though, does the kiosk come in hot pink or zebra stripe?  They also have video games, including Big Buck Hunter.  Good for a break when you’re tired of walking the floor.

I visited Surgical Information Systems and was pleased to see that this year, not only were they serving the IngaTini but also the InterOpTini which is more my speed.  They also had chocolate covered everything, and I am the kind of girl that appreciates that.  Thanks again for the hospitality!

FormFast has a great Indiana Jones “Peril of the Untamed Workflow” theme and was throwing fedoras into the audience, but I wasn’t lucky enough to get one.

The “Best Badge” award goes to the attendee who replaced his first name with “Talk To Me” in bold letters.  I didn’t fully appreciate the value of that badge until I was given the brush off by a couple of vendors.

News flash – you might want to find out a bit about the prospects that stop by so that you can make an educated pitch to them.  And if you can’t answer the questions, find someone in your booth who can, or schedule a follow up.  Trying to “fake it” is just really a bad idea and we can tell.

I enjoyed seeing so many members of the armed forces at HIMSS11 today and wanted to take the opportunity to thank all of you for your service to our country and around the world.  We appreciate each and every one of you and the excellent healthcare you provide to our troops and their families.  Seeing you puts everything in perspective and is an excellent reminder for those of us that tend to get focused on what in comparison are some fairly petty issues.  We’re not trying to keep systems up while caring for wounded on the battlefield or anything like that, and you deserve our utmost respect.

The big ticket of the day was of course HIStalkapalooza, and major thanks to Medicomp for their support.  It was a great bash and certainly one to remember. Thanks to my many new friends, especially Evan – your velvet jacket made my night.