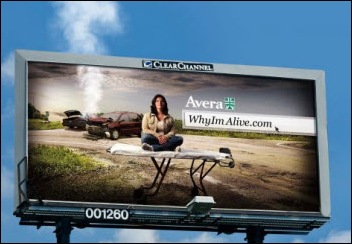 From Tobias Funke: “Re: interesting billboard. This is from Avera Health in Sioux Falls, SD.” That’s pretty cool – the billboard has a smoke machine behind it to extend the smoke into the sky. It drew lots of attention, both from passers-by who checked out the site afterward and the local fire department, who shut it down.

From The PACS Designer: “Re: Windows 1E9 beta. Just like Mr. H, TPD loves Firefox and avoids Internet Explorer. Well, now we have the Windows IE9 beta release, but you won’t be able to use it for Windows XP! It looks like a move by Microsoft to push more of us XP users to upgrade to Windows 7.” I’m still holding Vista against them. The decades-old Windows pattern is obvious: one really OS good release alternating with a bad one that causes endless frustration. My preferred browsers, in order, are Chrome, Firefox, Opera, and then IE (I don’t use Safari, so I don’t know where it would fit). Windows 7 is a winner, though, which is still not great consolation given that I paid for Vista instead of jumping right from XP to the next good version. I don’t think anyone would complain about moving up to Windows 7 if it didn’t require starting over for XP users — you have to have wasted your money on Vista to do a simple upgrade, or at least that’s what I recall when I last considered it. I suspect I’m like the typical XP holdout — not cheap, just not finding a good reason to risk problems knowing that Microsoft offers no help (in other words, have lots of time and a second computer to Google your problem just in case the first one is trashed because you’re on your own). 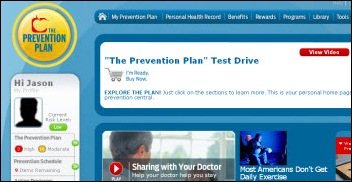 Former McKesson Provider Technology CFO Craig Niemiec is named EVP/CFO of US Preventive Medicine. I checked out that company’s prevention program and it sounds pretty cool: you pay $229 for the first year, complete an online health risk questionnaire, and then go to a local lab to have a panel of blood tests. The company sends your lab results to a PHR, you and your doctor get a custom prevention plan, you gain access to online dashboards and action programs, and a nurse advocate is available to help with health maintenance. Since it’s not tied to insurance or employment, nobody sees the information without your approval.

Job candidates with a CPHIMS credential would impress one out of five HIStalk readers if they were hiring. New poll to your right: would you use an free, ad-supported EMR?

Sonney Sapra is promoted to CIO of Tuality Healthcare (OR).

iOptimal announces the beta of iPad Hospital Toolkit, which it says requires no iOS programming and connects to standard databases to convert legacy apps to run on the iPad.

A third organization is approved by HHS to certify EHRs as an ONC-Authorized Testing and Certification Body: InfoGard Laboratories of San Luis Obispo, CA. They have many certifications and list extensive internal expertise (cryptography, security, systems architecture, etc.) that makes CCHIT’s credentials look a little anemic in comparison.

Siemens will make its IT Solutions and Services unit a separate company on October 1, having previously announced plans to cut 4,200 jobs there to set up a spinoff. That business covers a bunch of industries including healthcare, but I wasn’t familiar with the healthcare parts: content management, PACS data storage, identity management, and RFID. I assume this has nothing to do with Siemens Healthcare.

Cardinal Health sells its remaining shares in its CareFusion spinoff for $706 million. Some of the CareFusion medical device and technology brands include Pyxis, Alaris, AVEA, Jaeger, SensorMedics, V. Mueller, and MedMined.

England’s Connecting for Health wants NHS trusts to report their inventories of Microsoft licenses by October 1. Since CFH didn’t renew its Enterprise Agreement and their license count is fixed, that means trusts are own their own to budget and pay for their Microsoft licenses.

I’m not sure how this qualifies as defense funding, but Assistant Senate Majority Leader Dick Durbin brings home the Illinois bacon in getting $3.6 million in funding through the Senate Appropriations Committee for Children’s Memorial Hospital of Chicago to study regenerative genes. It’s great for wounded soldiers, so I guess you could squint a little at the tumescent federal budget and make it so. The Senate has to approve, but I think they are battle-weary themselves from approving endless federal handouts that, if you continue squinting, only slightly resemble a robust economy.

An interesting and cheap idea for practices interesting in reducing missed appointments: sign up for a Web-based virtual phone service and use it to send SMS reminders to patients.

Vecna Technologies signs a marketing deal with Cycom Canada to sell its QC PathFinder real-time hospital infection monitoring system to hospitals in Canada. The company, whose offices are in the DC area and Cambridge, MA, also offers a Web portal and patient self-service kiosks. Also, the medication delivery robot above. Their stuff looks pretty cool.

Former treasury secretary Paul O’Neill questions David Blumenthal after the latter’s EHR-love keynote speech at a patient safety meeting, asking him (I’m paraphrasing): if the government is so hot to spend billions on EMRs, then why not design a prototype and then refine it, creating a national standard? Blumenthal’s answer, also paraphrased: there’s a debate about whether the ideal approach is like the Internet, where competition took the basic structure of the Internet and turned it into something amazing, or should someone just set detailed standards centrally? He also touted certification. An interesting quote from the excellent Mass Device article, from Atul Gawande at an August meeting talking about reducing medical errors: “Ignorance remains, but we have a new kind of human failure that has emerged as important and that is what the philosophers call ‘ineptitude,’ meaning that the knowledge is there, but the individual or group of individuals fail to apply that knowledge correctly.”

The VA and DoD launch a fourth records-sharing pilot, this one involving the Spokane VA, Fairchild AFB, and Inland Northwest Health Services. The first three are in San Diego, Norfolk, and Indianapolis.

California Attorney General Jerry Brown wants to review the salaries of hospital executives, among several public positions that he thinks are overpaid. The healthcare example he gave was the CEO of Washington Hospital, who makes $847K. The hospital gave the stock answer about having to pay market salaries for the best hires, which always sounds lame to me. First, some of healthcare’s hires are clearly not the best people. Second, by that logic, you’d be paying teachers and ministers huge dollars if only they were lucky enough to have higher-paying alternatives. And third, I like the idea of offering less than market salary and seeing who really wants to help patients vs. themselves. If you can’t stand the idea of running a non-profit hospital for a paltry $500K, then don’t let the door hit you on your way out.