From LookingForAnswers: “Re: Epic. They’re winning deals like Cerner did 15 years ago when they were small. Cerner seems to be a revenue-churning machine that the public can participate in by buying stock. The only people who benefit from Epic are the owners and/or Judy. Which company has made more millionaires? Which company will change the face of HIT for the long run?” Here’s the real question: why can’t Cerner, with all its billions in market capitalization and name recognition, compete with Epic for new sales? As has been asked of other Goliaths (Microsoft, GM, Dell, GE, etc.) how could Cerner, given its ample lead time and resources, let the once-tiny David called Epic beat them year after year? My theory is threefold: (a) even entrepreneurial big companies naturally evolve into highly ineffective corporate bureaucracies that are motivated by fear and executive entitlement, the antithesis of innovation; (b) publicly traded companies let their numbers drive their business instead of vice versa, and (c) corporate Darwinism would have Cerner just buying Epic outright, but Judy throws a wrench into that evolution by refusing to sell the company.

But all is not lost: we don’t know Epic’s profitability, so Cerner may be beating them where it counts. And we know that Cerner has built a business that could weather Neal’s transition or sale to another organization, but we don’t know that with Epic. What I care about most is why Epic beats Cerner for every important deal, which would seem to indicate that Millennium isn’t up to the task. In other words, a $6 billion market cap company with a single, fairly low-rated product line that’s getting hammered by a smaller and much higher-rated competitor should think about developing a better product. Here’s another way to look at the value of ongoing R&D: the only company that beats Cerner consistently in new sales is also the only one with a newer product. 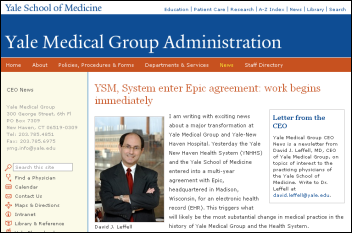 From JA: “Re: Epic. More details on the Yale and Epic adventure.” Yale Medical Group describes their plans for Epic, also mentioning that a CMIO will be hired who will share time with the School of Medicine and Yale-New Haven Hospital. The specific Epic features that seemed to seal the deal were the obvious ones: ambulatory-inpatient integration and MyChart, areas in which Millennium is clearly inferior.

From SEC Fan: “Re: University of Michigan. CareWeb does many things well (less than they claim), but they have installed Eclipsys Sunrise over the last five years for inpatient. Interesting that after 3+ fails at EMR, they get one right and now replace it.” Thanks for reminding me. That’s another big Eclipsys loss to Epic, six years after the contract was signed and less than two years after Sunrise went live at UM.

From The PACS Designer: “Re: Windows Phone 7. The mobile phone marketplace will have more competition soon, as Microsoft has announced the beta for Windows Phone 7.” It had better be good if it’s going to displace the iPhone, Android, and BlackBerry this late in the game. I don’t see Microsoft as being good at come-from-behind victories; it’s better at running a prevent defense to protect the leads it generated a couple of decades ago. On the other hand, Windows 7 was a hit, so maybe they’re finally getting it.

From Vendor CEO: “Re: HIStalk. I have really enjoyed watching your progression. It’s kind of like watching the New York Times and Murdoch sites (HIT rags) try to get customers to pay for their sites while hordes of readers are rushing to all the free specialty news sites (HIStalk). Fascinating!” Thanks. Maybe I’m the open source alternative, a marginally skilled but enthusiastic spare bedroom pseudo-journalist trudging home to a PC after a long day at the hospital.

Listening: new from Grand Mal, which sounds like the Rolling Stones playing a smoky New York club in 1973.

Stuff you can do here: (a) put your e-mail in the Subscribe to Updates box to your right and be the first to know; (b) use the Search All HIStalk Sites box to dig through all HIStalk-related sites, including the 7+ years since HIStalk has been around; (c) send me your secret information and rumors via an anonymous Rumor Report, the lifeblood of HIStalk; (d) Friend or Like us on Facebook; (e) support my sponsors by giving their ads an occasional look and click; and (f) send in a pitch-free Readers Write article.

Not many readers think the final Meaningful Use requirements are too hard for providers to meet, but beyond that, it’s pretty much even as to whether they’re too easy or about right. New poll to your right: who benefits most from Most Wired-type awards?

A reader mentioned a JAMIA article last week, eliciting only a general reply from me since I didn’t have access to the full text version. Thanks to the folks at AMIA, who read my comment and hooked me up with anonymous access to their site so I can give a better answer next time around.

This from Weird News Inga: a medical practice sues its landlord over rights to a meteorite that crashed through the roof and into their examination room. The landlord claim it belongs to them, but the doctors say the landlord plans to renege on their promise to sell it to the Smithsonian for $5,000. The doctors say they’ll honor that deal and send the money to Doctors Without Borders for Haitian relief.

These rumors come up all the time, but once again Oracle comes up as a potential acquirer of Cerner. An Oracle VP supposedly claimed the company will spend $70 billion on acquisitions over the next five years, which always leads to talk about vertical markets such as healthcare, which means Cerner.

Interesting: All Children’s Hospital (FL) will become part of Johns Hopkins Medicine (MD). In related news, the governor of Maryland wants to position the state as a health IT leader, citing a statewide HIE, EHR implementations, and recruitment of HIT professionals.