From Skyline Pollution: “Re: non-profit UPMC. They may be paperless, but can’t do without their $1.7 million skyscraper signs, according to the spokesperson for the multi-million dollar CEO. More help desk support and nurses could be had for that chump change.” CEO Jeffrey Romoff, who took a 25% pay cut this year to $3.6 million, admits that UPMC is being sued by a local sign company for an unpaid balance, but says the company’s work was substandard because high winds delayed hanging the 20-foot-tall “M” in “UPMC” atop the 64-story US Steel Tower.

From Larry’s Pizza Guy: “Re: Oracle. With the buyout of Sun completed, Oracle is reworking the contracts for EGATE/JCAPS Integration Engine clients to be based on the number of cores of a system instead of the actual number of interfaces being used. The clients’ only option is to invest time and money to replace the engine(1+ year process) or paying the outrageous increased fees (200,000+ more) to continue using the EGATE/JCAPS.” I hadn’t heard that, but I’m not a bit surprised since a lot of CEO Larry Ellison’s $30 billion in net worth came from charging licensees for theoretical usage capability rather than usage itself. Or, perish the thought, just selling the product for a fixed price. Imagine how much more money Bill Gates would have been worth if Word was licensed by CPU power or by the number of words typed. I’m still a market forces guy, so if Oracle is taking advantage of customers, those customers should bolt for a better option.

From Better Late: “Who do I call when my Monday Morning Update isn’t delivered on time?” Funny. I usually publish Saturday evening, but a pretty wonderful getaway with Mrs. HIStalk took me offline until Sunday afternoon. If it’s any consolation, you’ll get that late-breaking Sunday morning HIT news that you would have missed otherwise (irony meets irony). Thanks to those who expressed concern, best wishes, or consternation – it’s nice to be noticed.

A Wall Street Journal article called Smart Money: Is Your Favorite Charity Spying on You? highlights Sharp HealthCare, which uses data mining software to identify patients who might be financially capable of becoming hospital donors. The article points out that hospitals are even training doctors to identify prospects, and once a VIP has been tagged, hospitals may give them perks such as free visitor parking passes, direct access to staff, and priority appointments with specialists. The president of a philanthropy group admits that such targeting is kept quiet by nonprofits because it “creeps a lot of people out.”

I’ve been involved in a couple of CPOE implementations and they went well, so I’m a little surprised that 33% of respondents to my poll believe that CPOE makes outcomes worse. Maybe theirs didn’t go so well, or maybe CPOE sounds more dangerous theoretically than it really is to those without first-hand experience. Anyway, in the new poll to your right: is a best-of-breed application strategy a good or a bad idea? The poll accepts comments, so feel free to add yours along with your vote. Ed Marx stirred up a lot of commentary from his post that touched on that topic, so let’s see the consensus.

Speaking of Ed, thanks to him again for his inaugural HIStalk post, which drew a lot of thoughtful discussion. I posted his response at the end of the original article, so it’s worth a re-read.

The 150-bed Robinson Memorial Hospital (OH) recently chose Eclipsys Sunrise. The local paper discloses the overall cost of its EMR project: $39 million, or what seems to be $260K per bed.

A group of Baltimore hospitals, including Johns Hopkins, donates technology to the city’s fire department that allows EKGs to be transmitted from ambulances to hospitals, allowing faster diagnosis and treatment of heart attacks in progress.

In Ireland, a hospital requests an urgent review of its 20-year-old IT system because it poses “consequential risks to patient safety.”

A local newspaper article covers the use of AirStrip OB monitoring software at Somerset Hospital (PA), paid for by us federal taxpayers.

Meditech says it will add 300 employees this year to its current 3,000 to keep up with customer demand.

A night shift security guard at a Texas clinic who spent his last scheduled night on the job hacking into 14 of his employer’s computer systems pleads guilty to two charges of “transmitting a malicious code” and faces 10 years in prison for each count. He hacked the clinic’s HVAC system (apparently feeling a need to mess up the air conditioning) and another that contained patient data. He’s not the brightest bulb in the circuit: the self-styled “GhostExodus” posted a dry run of his adventure on YouTube (above – some language is PG13) which led to his arrest. This isn’t an entirely original observation on my part, but the line between known criminals and security guards (especially those of the rent-a-cop variety, which GhostExodus was) is often blurry. 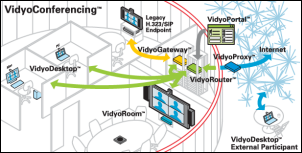 Vidyo introduces its telepresence system for healthcare that uses a standard broadband connection instead of a dedicated network. The system, which the company says costs around $1,000 per user or 85% less than competitive offerings, is being used by North Region Health Alliance in Minnesota and North Dakota.

A Delaware state congressman, chair of an “obscure” committee that recommends which government programs to end, subpoenas a state auditor for information on the Delaware Health Information Network. He says he wants to know where DHIN has spent $20 million in taxpayer money. The auditor calls the subpoena “a joke”, adding that “All you need to know is they sent out the subpoena and a press release at the same” and that the audit would have been completed earlier without having to deal with the surprise subpoena.

Anyone who likes to make fun of healthcare’s reliance on MUMPS and the Cache’ database: the European Space Agency chooses Cache’ to support the Gaia space mission that will map the Milky Way. Now who’s the rocket scientist?