From The PACS Designer: “Re: Google Documents. In a challenge to Microsoft Office, Google has expanded its online document offerings. TPD has been using the Google spreadsheet application for some time and now will be testing the new features as well as the usability of Google Presentations and Google Drawings.”

From Rysanwss: “Re: Yale-New Haven. An EVP made a formal announcement to the IT staff that Epic is in their future. No signed contract yet, but they are close.” 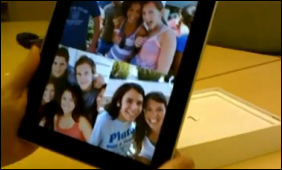 From Jobs: “Re: Apple iPad unpacking video. A staple of Star Trek movies is a long, slow tour around the exterior of the ship, showing the exquisite detail of nacelles, the phaser emitters, the gentle curves of the saucer section, etc. This scene is ‘trekkie foreplay’. The iPad video is the Apple version.”

Sad news: Steve Tanaka, CIO of Palomar Pomerado Health (CA), drowned last week while on vacation on Costa Rica. He was 50. The hospital has created the Steve Tanaka Award for Excellence to honor his work and memory.

This story doesn’t inspire much confidence in healthcare IT security. Auditors reviewing the security of electronic patient records of Vancouver Coastal Health Authority found so many vulnerabilities in every area that they buried the report for six months, fearful that anyone reading it could start digging through its systems. “No intrusion prevention and detection systems exist to prevent or detect certain types of [online] attacks. Open network connections in common business areas. Dial-in remote access servers that bypass security. Open accounts existing, allowing health care data to be copied even outside the Vancouver Coastal Health Care authority at any time. Almost all users have some access to confidential information about all clients in the database. Many clients’ full health information is accessible to a large number of users.”

Software developed at Brigham and Women’s Hospital to optimize the schedules of astronauts based on their sleep rhythms may have a role in healthcare, with potential use in creating employee schedules, predicting low-performing times to avoid errors, and using light therapy to  change natural sleep cycles. I found a free beta download here.

From Weird News Andy, who comments on his find as <predictable>The thought of an implantable chip just gets under my skin.</predictable>. PositiveID (formerly VeriChip) strikes a deal with the International Maritime Medical Association to offer its PHR to seafarers. WNA also found this story about the theft of 57 hard drives from BCBS Tennessee, now estimated to include records of 1 million patients.

Epic CEO Judy Faulkner will receive an honorary Doctor of Science degree on May 14 from her alma mater, the University of Wisconsin-Madison.

Sheehan Medical Cork Medical Centre, the first new private hospital to open in Cork, Ireland in 30 years, awards its IT contract to Meditech. The company has several other Irish clients.

Dennis Quaid has produced and narrated a documentary called “Chasing Zero: Winning the War on Healthcare Harm” that will air on the Discovery Channel next Saturday, April 24. It was inspired by the near-fatal heparin overdose given to his infant twins at Cedars-Sinai.

An Army doctor faces court martial after refusing deployment orders to Afghanistan, stating his belief that the orders are illegal because President Obama was not born in the US and therefore cannot serve as his commander-in-chief.

A former medical records clerk of St. Peter’s Hospital (NY) is arrested for stealing patient information and shopping online using their credit card numbers. He was caught after ordering merchandise and forgetting to change the default shipping address, sending a package to the house of one of his victims, who realized someone else had ordered it using his credit card.

Odd lawsuit: the sister of a man accused of beating his parents to death sues the hospital for negligence in the death of their mother, claiming “wrongful death”.

mPay Gateway says more than 800 physicians signed up for its patient payment system during the first quarter of 2010.

I don’t think I’d be starting a career in PACS sales any time soon, assuming the results of this CapSite Consulting study are accurate. Currently 96% of hospitals have already own PACS solutions and only 17% of the surveyed hospitals have plans to buy a new or replacement system. The biggest imaging IT spend in coming years will be for image archiving and storage, plus voice recognition tools. Almost half of hospitals with PACS cited functionality as the biggest weakness of their PACS.

Cardiology Associates (AL) picks Allscripts’ EHR for its 38 providers.The practice will tie the EHR into its existing Allscripts PM and document management systems.

Desert Orthopedics (OR) plans to implement SRS hybrid EMR for its 10 physicians.

IDC Health Insights takes a peek at 14 HIE vendors and provides assessments on their offerings (for $4,500, you can get a copy of the report and fill us in on the details). For the most part, the 14 vendors were the ones I would have expected (Axolotl, dbMotion, Medicity, etc.) One surprise vendor was eClinicalWorks. I knew they had an HIE product, though it’s not heavily promoted. On the other hand, I know other ambulatory vendors like NextGen and Allscripts are trying to establish an HIE presence, yet were not included. A quote:

Typical of nascent markets, the HIE vendor market is volatile with new entrants and market consolidation. We can expect dramatic changes in the next 12 to 18 months as HIE technologies become a commodity and dominant players acquire their way into a crowded market currently made up of many small, privately held vendors.

The California Telehealth Network awards AT&T a $27 million contract to build a telecommunications network to connect hundreds of providers throughout the state.

Here’s a good tax day story for you. The president of a San Diego medical billing company pleads guilty for failing to pay $2.5 million in employment taxes, even though the taxes had been withheld from employees pay checks. Anthony Vacchi, Jr faces up to five years prison.