ONCHIT announces $60 million in new grants (sounds like chicken feed in these stimulus-happy days, doesn’t it?) University of Illinois at Urbana-Champaign will look at security, Universe of Texas Health Science Center will study patient-centered cognitive support, Harvard takes on application and network architectures, and Mayo will review secondary use of EHR data while maintaining security and privacy. The last one sounds the most interesting to me.

Merge Healthcare sells $42 million of stock in a private placement to help pay for its proposed acquisition of Amicas.

Bill Gates composes a fascinating remembrance of Ed Roberts, inventor of the Altair computer and therefore the father of the PC, who died last week at 68. Of course, Bill and Paul Allen kind of screwed Ed legally to get the rights to sell BASIC to other companies even though they had sold Ed an exclusive license, but I guess Bill’s being sentimental now that he’s earned billions from it. I knew but maybe you didn’t that Ed was a country doctor in Georgia, having gone to med school at 41 and finishing first in his class after selling out his computer business in 1977.

Next, on a very special episode of Weird News Andy: two North Carolina doctors are reprimanded for performing a C-section on a woman who wasn’t pregnant. A resident misdiagnosed her “false pregnancy”, the docs tried for two days to induce labor without success, and they finally opened her up only to find no baby. Nobody had bothered to verify that she was indeed pregnant. In their defense, the resident supervision was complicated and false pregnancies are apparently quite believable without diagnostic verification.

Most of us agree that patients should control the use of their health information, although the question of “to what degree” would likely be more contentious. New poll to your right: what impact will the iPad have in healthcare?

CMS auditors conclude that “alarm fatigue” caused by incessant monitor beeping contributed to a patient’s death at Mass General in January. They also found that the patient’s bedside crisis alarm had been turned off. In response, the hospital has disabled the “off” buttons, put more speakers in nursing stations, and assigned nurses to watch monitors full time. While they were there, the Medicare inspectors also wrote up privacy violations, including having patient names on whiteboards and positioning in-room video monitors so that they were visible to visitors.

A two-year-old dies from a heparin overdose at Nebraska Medical Center. The hospital implements the usual after-the-fact changes that sound good, but really aren’t sustainable even for high-alert drugs like heparin: requiring a second nurse to verify the dose, having pharmacy observe the initiation of the bag, and turn on a hard stop on the infusion pumps. 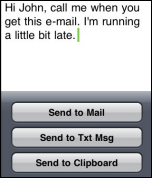 Nuance announces availability of Dragon Dictation for iPad, available for free from the Apple App Store. It supports dictation and sending e-mails by voice.

Recommended System for a 200-Bed Hospital with Minimal IT Resources

A reader asked me about which systems I would recommend for a 200-bed community hospital with minimal IT resources. Specifically mentioned were McKesson Paragon, Meditech 6.0, and Cerner Millennium. I assume the hospital wants a broad set of applications ranging from revenue cycle to CPOE. My answer, in essence, was this:

So I would rank them Paragon, Meditech 6.0, and remotely hosted Cerner. I didn’t rank Sapphire, but I would still give it a look.

I got 25 reader responses, summarized as follows.

Thanks very much to everyone who took the time to respond. This is excellent information for the reader (and for me). We ought to do this more often.