From The PACS Designer: “Re: Wall Street Journal iPad review. TPD has always admired Walt Mossberg’s technology reviews and he’s done another good one on the Apple iPad. The iPad is thinner than a netbook and weighs only 1.5 pounds. Walt was able to get eleven and a half hours on the battery before needing a recharge! If you want to be the first to have one, get in line early as supplies are limited due to production being offshore.” 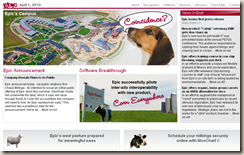 From anesoptime: “Re: Epic. Go to epic.com today, April 1st. I’ve worked with many of the big EMR vendors and many niche vendors. This is one of the many reasons I will only work on Epic projects and for Epic clients. They have a sense of humor and they do everything first class or at least put their best foot forward.” Lots of folks e-mailed me about Epic’s brilliant home page replacement, full of phony April Fool’s news (click the image above to enlarge it if you missed it). More than one person was fooled by the “Company Reveals Plans to Go Public” headline, I’m told. Also on the page: Epic Issues First Press Release; Epic Offers Training Course in Cow Chip Throwing, Suggests You Duck; and Epic Offers Organic, Home-Grown Carrots as an ARRA Alternative for Docs. Truly inspired, irreverent, and right in character. They are the Google of HIT. Apparently the employees didn’t even know about it.

From zaphod bebblebox: “Re: CSC. Ouch! CSC and iSoft again miss a go-live date at critical first major activation site amidst comments of failed data loads and in excess of 100 software errors. CSC have been told by NHS that they will not receive expected substantial cash payments associated with this milestone and their hoped for contract reset will not be signed.  Both CSC and iSoft had previously told analysts that they were expecting these payments for their end of quarter results and that they would meet this milestone. More importantly, Morecambe Bay Trust have decided NOT to go-live on the software at any forseeable date.”

I just ran an interview I did Wednesday night with Gary Cohen, executive chairman and CEO of iSOFT. I asked him about the critical Morecambe Bay go-live. That’s important because it was announced today that the NHS-mandated deadline has been missed, meaning that primary contractor CSC will not be eligible to get a renegotiated deal and, in fact, may be in danger of being replaced (although in the UK, “with whom” is always a good question since all the usual contractors have already bailed). Judging from the rhetoric, I’d say it’s an NHS bluff, especially considering that the trust itself has some responsibility for its own state of readiness. Still, it puts the heat on CSC contactor iSOFT and its Lorenzo system, also discussed at length in my interview.

I got a surprising number of well thought out comments about which hospital system would be a good choice for a 200-bed hospital with limited IT resources. If you want to chime in, e-mail me. I’ll share those suggestions in the Monday Morning Update, along with the advice I originally gave. 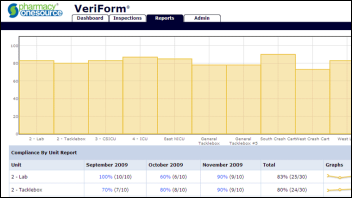 A reader tells me that CSC Healthcare is losing executives, including its retiring president.

Former Siemens Medical Solutions CEO Janet Dillione turns up after a hasty post-HIMSS resignation. She has been named as EVP/GM of the healthcare business of Nuance. In the Know actually tipped me off early Wednesday morning. 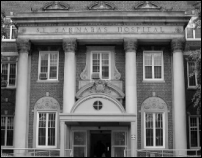 Odd lawsuit: a doctors’ union is suing St. Barnabas Hospital (NY) for planning to spend stimulus money to replace a parking lot with a deck, claiming that 20 parking attendant jobs will be eliminated as a result. The hospital says the union is just causing trouble because it’s trying to unionize the residents.

Paul Peck, a 30-year veteran of healthcare strategy and executive management, has joined Culbert Healthcare Solutions as VP of consulting services, where he will manage the physician practice service lines and launch new acute market services.

Listening: Michael McDermott, reader-recommended Irish-American folk/pop music. I like it.

A University Medical Center (NV) employee says the $155 per hour contracted IT director was spying for the hospital CEO, now on trial giving no-bid contracts to acquaintances. One of them was the IT guy.

Wentworth-Douglass Hospital (NH) sues its two former pathologists under the Computer Fraud and Abuse Act, who it claims deleted computer records when their pathology group was replaced. The hospital claims the docs brought in external hard drives, downloaded hospital information to them, and then used a drive scrubbing program to delete the hospital’s data. The hospital became suspicious when they found a DriveScrubber 3 CD in the laptop’s CD tray.

An Illinois eye surgeon files suit against Microsoft, claiming he invented and patented technology that would allow Zune music player users to buy songs they hear on FM radio. He offered the technology to Microsoft in 2006, says he never heard back, and it popped up in the Zune two years later.

HHS spends $26 million of HITECH money to hire a PR company to try to convince consumers that their privacy concerns involving electronic medical records are unwarranted. The company hired was the same one who sent out a fake video news story awhile back, including an actor posing as a reporter, that was found to have violated a federal ban on propaganda.

Nepal will implement a telemedicine program connecting 25 remote hospitals in the Himalayas to specialists in the capital of Kathmandu via satellite.

Enovate, maker of mobile and wall-mounted computer workstations, is named to “Michigan 50 Companies to Watch”.