From Bill Costanza: “Re: HIMSS keynote speakers. I’ve ranted to HIMSS about the lame speakers who have no bearing on either IT or healthcare. They would rather have vapid celebrities to entertain the troops. I can just see Bob Hope and his golf club on stage.” I quickly came up with 10 I’d like to see: (a) Bill or Melinda Gates (to talk about global health and atone for Ballmer); (b) Larry Ellison (an entertaining wacko); (c) Richard Grainger (to describe the folly of massive civil works healthcare IT projects); (d) Barack Obama (he hasn’t done much, but he’s maybe the funnest and nicest President so far); (e) Suzanne Somers (cute and fun for a 63-year-old and full of all kinds of bizarre medical theories); (f) Senator Chuck Grassley (hates government and healthcare waste and suggested that AIG executives who got huge bonuses from taxpayer bailouts should quit); (g) Judy Faulkner or Neil Pappalardo (pioneering industry recluses); (h) any health bigwig from Chinese government; (i) Ben Carson (Hopkins neurosurgeon); and (j) Hans Rosling (Swedish global health expert and inventor of free healthcare statistical display software). I could also be convinced to back Artie Lange, Bill Murray, or Kate Winslet as the token celebrity.

From Doug N. Nuts: “Re: patient safety. Thought you might be interested in Bob Wachter’s commentary on the media and safety. This is an excellent site for safety in general and has great monthly CME.” The editorial postulates that hospitals in the Northeast and those known to house celebrity patients get disproportionate coverage for making medical errors, and even though hospitals shy away from the publicity, they generally emerge better after the public scrutiny (Hopkins, Dana-Farber, and Duke are given as examples). I agree completely. It’s a shame that greedy conglomerates bought local newspapers, loaded them with debt, and mismanaged them into near irrelevance — we need real reporters as public watchdogs. Since the trade rags do little original reporting of real news, especially if it makes any healthcare stakeholder look bad, almost all the big patient safety stories come from the local newspapers or peer-reviewed journals. 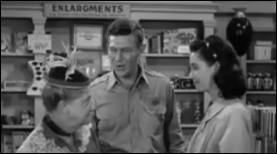 From Lady Pharmacist: “Re: hi. Could you put in a kind word? This week is National Pharmacy Week. There are a number of pharmacists and pharmacy technicians (both in hospitals and the vendor side of the world) involved with informatics and are trying to make software / products / systems safer as it relates to the use of medications and ultimately patient safety.” We love pharmacists and techs at HIStalk, so here’s that shout-out, especially for those who serve patients in an IT or patient safety capacity. I always give lab people credit for being excellent developers, adopters, and users of IT, but the unquestionably most complex set of functions and workflows to automate in healthcare involve the ordering, dispensing, and administering of hospital medications. As the photo above proves, lady pharmacists like yourself have been providing pharmaceutical care for at least 50 years.

From Lee Samosa: “Re: GE. GE has pulled the plug on development of the Centricity Cardiology DMS program. All of the developers and most of the support staff in the Sioux Falls office were laid off this week, leaving behind a small team of sustaining engineering and a single Level 4 support person to support the installed base.” My GE Healthcare contact is checking on this. That’s the cardiology data management systems group.

From Certifiable: “Re: Epic. Gary (IN) Methodist de-installed Epic, at the recommendation of consultants who deemed Meditech more appropriate. I have heard they are considering an Epic return.” Any hospital considering those systems as interchangeable alternatives, much less swapping them back and forth, is clearly in need of some soul-searching.

I messed up the Moment With featuring Jon Phillips last night (I was tired). I posted it to HIStalk Practice by mistake and sent out the e-mail blast without noticing. Inga caught it right away, so I then posted to HIStalk like I originally intended and sent out the corrected link (no spam intended). So, Jon is up on both sites, which I told Inga is like when the president’s speech is on every TV channel. 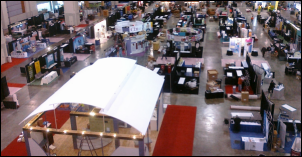 Dr. Gregg Alexander thanks the folks who stopped by the Pediatric Office of the Future exhibit (under the white roof during setup above) or his get-together after. He was sick as a dog, so I think he was in a daze, but he was a trouper throughout.

I was talking to a colleague about today’s Windows 7 launch. Both of us longed for the good old days when desktop software was so important that people slept outside computer stores (remember those?) to be early in line when the store opened at midnight. Actually, I should correct that: there are still massive lines when products launch, but only at the Apple Store.

The nice folks at MedVentive e-mailed to let me know that they’re hosting a Webinar next Thursday, October 29 at 1:00 Eastern entitled “Measuring the Business Value of Business and Clinical Intelligence (BCI)”. The company offers intervention, registry, dashboard, and P4P solutions for providers, along with quality, scorecard, registry, HEDIS, and Medicare Advantage programs for health plans. 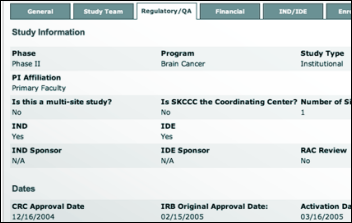 Allen Tien, MD, MHS of mdlogix checked in to say that Johns Hopkins is using the Subject and Protocol Registry of the company’s Clinical Research Management System for all of its new studies. It’s being used for 790 studies, 15,000 subjects, and more than 1,000 users in all departments.

Document management and revenue cycle management vendor HealthPort announces the terms of its upcoming IPO, with a market value of $338 million at the midpoint of the proposed range. The Alpharetta, GA company has annual revenue of $285 million. 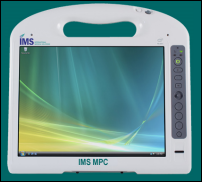 Ranjan Das, the 42-year-old CEO of SAP India, dies of a heart attack. He worked for InterSystems and Oracle previously. 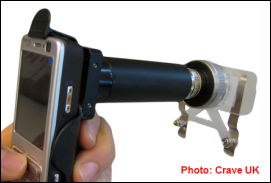 A writer decries companies that jumped all over Second Life, only to leave it littered with virtual ghost towns after they abandoned them to chase equally trendy but newer technologies like Twitter. Called out: Cisco’s Virtual Palomar West, intended to promote “The Hospital of the Future” and Cisco’s medical-grade network, but now “totally deserted and mostly broken.” I’m not sure I believe that even though I always thought Second Life was an over-hyped bust.

The Quantum Group gets a delisting notice from Amex and voluntarily decides to trade its shares on the OTC BB. Amex didn’t like the fact that it “sustained losses that were so substantial …that it appeared questionable, in the opinion of Amex, whether the Company would be able to continue operations …” The company offers “a 21st Century EMR Solution” (not surprising since that’s the century we’ve been in for quite a few years now), an MSO, and provider services. Shares are trading at 55 cents, for a market cap of just over $6 million.

A hospital rabbi is fired for violating HIPAA privacy laws after writing an essay about comforting the family of a security guard killed at the U.S. Holocaust Memorial Museum. She says she didn’t say anything that wasn’t public knowledge. She thinks the hospital fired her for complaining that it pays male rabbis more, so she’s thinking about suing.

Researchers in Japan develop software that predicts with 80% accuracy the chance that a 911 caller will die. It may have application in routing ambulances to the most critically ill callers. I say license it to Hollywood to make another sequel to The Ring.

United Health posts Q3 earnings that beat Wall Street expectations, with one of its fastest growing segments being its Ingenix healthcare IT business.

CareTech Solutions is named one of the best places to work in the Detroit area.

Odd lawsuit: a psychiatric hospital patient sues the facility for $7,500, claiming it should have prevented a female employee from having sex with his roommate. She already admitted it and quit.

GE launches a $250 million equity fund to invest in small healthcare technology. The GE Healthymagination Fund will focus on HIT, life sciences, and diagnostic companies developing unique and innovation business models and services. The fund is part of GE’s $6 billion Healthymagination initiative. GE’s total revenues in 2008 were $187 billion, by the way, making the $250 million equity fund look smaller than a rounding error.

System integrator Emtec expands its healthcare offering with the signing of partnership agreements with FairWarning and BridgeHead Software.

Federal authorities admit that the lack of electronic interfaces between labs and provider EHRs continues to be a challenge to the industry. Technological and financial challenges force many labs and providers to rely heavily on paper and fax options. The HIT Policy Committee heard testimony on the topic this week as it prepares its meaningful use recommendations for HHS and the ONC. 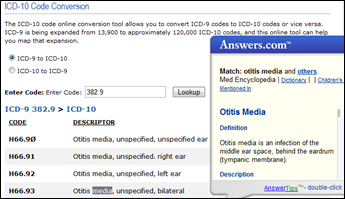 The American Academy of Professional Coders introduces an online ICD-10-CM code conversion tool that converts ICD-9-CM codes to ICD-10-CM codes (and vice versa). The tool is free and looks pretty easy to use, even for someone who knows nothing about coding (like me). Note that the site doesn’t provide any sort of data conversion of your existing files, but advises you which ICD-10 codes will take the place of the current ICD-9 scheme.

You got to know this was a painful discovery. A Canadian medical office realizes it permanently lost two years worth of electronic patient records, presumably during an EMR conversion.

The White Stone Group installs the latest version of its TRACE software at San Antonio Community Hospital (CA.) The implementation is the first for this newest release, which tracks communication across the healthcare revenue cycle. I interviewed the company founder Guile Cruz a couple of years ago and was impressed with the number of prominent clients and its highly functional product. 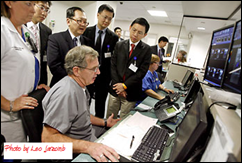 Presbyterian Intercommunity Hospital plays host to physicians and technicians from Singapore who were checking out the hospital’s EMR (Eclipsys, I believe). The Singapore group wanted to see an EMR in action before implementing their own at their 1,600-bed Singapore General Hospital.

Here’s a prediction that’s sure to appeal to many readers: up to 50,000 new HIT positions will be created over the next several years as a result of the federal stimulus package. A recent Robert Half survey of healthcare CIOs found that 76% were looking to hire network administrators in Q4 and 72% were positioned to add desktop support. If you need a lower-tech job, be assured that demand for medical records clerks is also on the rise, making Robert Half’s list of 10 Promising Jobs for 2010.

VeriChip continues to try to re-establish itself in the market, announcing a strategic partnership with the Diabetes Research Institute(DRI). VeriChip and DRI are developing a glucose-sensing RFID microchip. VeriChip also hopes to incorporate findings into its Health Link PRH.

I think this may be the best name ever for a business: Snoring Isn’t Sexy, LLC, which offers an online directory service to facilitate communication between patients and providers. The company just announced that it can handle the secure transmission and storage of all electronic communication. Curious logo, don’t you think? Is the suggestion that you get to sleep with beautiful women if you don’t snore, or that perhaps some beautiful women actually snore? (unlikely)