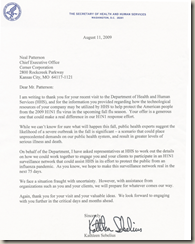 From Cynical CIO: “Re: Cerner. Interesting initiative. What’s in it for them?” Click the graphic above to see the letter from HHS Secretary Kathleen Sebelius to Cerner CEO Neal Patterson, taking him up on his offer to create an H1N1 surveillance network made up of Cerner clients. Attached to the letter was Cerner’s pitch to its customers, asking them to sign an agreement allowing Cerner to distribute HIPAA-compliant aggregated data from their facilities. It sounds kind of cool. Benefit to Cerner? Well, Cerner got face time with Sebelius, did her sort of a favor, and may get unspecified IT vendor benefit someday. Add that to having a former Cerner director as President Carter’s … err, President Obama’s healthcare reform czar and you’ve got friends in high places who are spraying great gouts of taxpayer dollars directly at healthcare IT. Still, I’d say Cerner’s intentions were more noble and focused primarily toward their clients and their patients, so I tend to believe their claims of sincerity.

From Michael: “Re: Texas Toast. A certain high profile technology / billing service company issued walking orders to 30 practice management billing employees at 2:00 PM Thursday. Word on the street is that physicians are ‘heated in Houston’. Silicon Valley VC types have learned that hand-to-hand combat the physician office billing trenches is a different kind of war. The VC types ‘donated’ $13.8 million to a lost cause in March of ‘08. I’m wondering about the physicians, their cash flows, and how many physician-initiated lawsuits are on the dockets.”

From Bells are Ringing: “Re: UPMC. From their site: ‘Alcatel-Lucent, a telecommunications industry powerhouse, has played an important role in delivering innovative communications platforms, including multimedia and data infrastructures, wireless and wireline broadband access, and full network optimization.’ Fact: so-called high tech telecom has been disruptive to care processes at the new Children’s Hospital since inhabitation in May. Shhhhh.” UPMC and Alcatel-Lucent are joint venture partners, so there’s no chance of discouraging words being heard.

From Fred: “Re: Meditech. Their latest technology first was known as Focus (internally), then C/S 6.0, and the latest is Advanced Technology. You wonder how long they spent thinking about this one.” That name makes me think of the IBM PC AT, which wasn’t advanced for very long. Interesting: did 6.0 sound too much like an easy upgrade when it wasn’t, or maybe was it a good marketing opportunity to rebadge a big technology change to impress the market? I have to say I like the strategy even though the name is kind of white bread. I’d have gone with Meditech Optimized FOcus , or MOFO for short. Quick, no peeking — which name do you remember, theirs or mine?

From Mike Mills: “Re: HIEs exchanging data. Maybe the people living in those regions could get stimulus funds for travelling to the other regions, where they could get sick, so that the providers could actually have a reason to view clinical data for someone who lives four hours away!” I tend to agree that the “unconscious in the ED while on vacation” is a stretch, but somehow people always assume that happens a lot. I figure it’s 0.005% of the healthcare that raises the interoperability cost by maybe 25,000 times over just connecting everybody in a single region, but everybody likes irrelevant analogies like those involving cell phone service or ATMs.

From Mick: “Re: Steve Hess at Christiana Care. What happened to him?” Nothing that I’ve heard. His name is still on some recent press releases and his LinkedIn profile says he’s still there.

Listening: relatively new music from David Byrne and Brian Eno, reader-suggested. I’m not a huge fan of either (maybe more of their former bands, Talking Heads and Roxy Music, respectively), but it sounds pretty good.

HealthHiway, an India-based HIE platform vendor that offers connectivity to doctors in India for as little as $200 per year, gets $4 million in funding from Greylock Partners.

I’ve been getting hammered lately by vendors and organizations wanting me to provide free advertising. For Webinars and conferences, you can add them to my events calendar yourself at no charge. I won’t link to your survey, run your press release if it doesn’t interest me, or give you space for your promotional article, sorry. Everybody would stop reading if I cluttered it up with all that stuff like lots of industry sites do.

Craneware announces FY09 results, with sales up 68%, revenue up 23%, and profit up 29%. I just now remembered that I was on the hospital IT steering committee that approved what must have been one of their first US sales going back at least eight years ago. They had a pretty good story even then.

Inga is turning into Weird News Inga, having sent me this: a 65-year-old man gives the finger at a healthcare rally — literally. Healthcare reform advocates and protesters in California get into the stereotypical heated discussion (likely armed with lots of emotion and minimal facts) when a pro-reformer allegedly confronts an anti-reformer. The anti-reformer, saying he “felt threatened”, punches the pro-reformer in the nose. They get into a full-on fight and the pro-reformer bites off the anti-reformer’s pinky. It’s nice to know that such an important issue is being debated with civility by well-informed citizenry. I’m beginning to think that 90% of Americans don’t have the intelligence or knowledge to debate laws, vote, or serve on a jury, being intellectually suited only to vote contestants off reality shows.

The US Patent Office grants TeraMedica a patent for its Evercore solution and its concept of Clinical Information Lifecycle Management.

A great PR gimmick: the MyMedicalRecords PHR people offer to reimburse subscribers up to $5,000 if they get H1N1. The relationship between the offer and the product is tenuous at best, but it’s kind of fresh.

Up to 11% of doctors aren’t offering immunizations because insurance pays less than the cost of the vaccine itself. Studies show doctors send patients to public health clinics instead, but parents don’t often follow up and kids aren’t being immunized. CDC is very interested, having observed that half of kids with measles were seeing doctors, but didn’t get the shot.

Which of these doesn’t belong with the others: Eclipsys, athenahealth, HIStalk Practice, and Sage. The answer: none — all of those organizations (and others) are sponsoring the AAP Pediatric Office of the Future exhibit at the American Academy of Pediatrics conference in Washington, DC October 17-20. This isn’t one of those lame “media sponsor” deals where all you do is run free ads. HIStalk Practice is a real, “I’m writing a check” sponsor in support of our regular contributor, Dr. Gregg Alexander. Now I doubt you’ll start making travel plans just because HIStalk Practice is involved, but if you’re going to the conference anyway, check it out and maybe find Gregg to say hi. There’s no booth or anything, just a PC running a presentation that I haven’t figured out yet.

Former Eclipsys SVP Keith Figlioli is named SVP of the healthcare informatics division of Premier. He has no informatics background that I can discern.

From Weird News Andy: in Australia, Queensland Health has the answer to patient harm caused by overworked medical residents whose on-call shifts run up to 80 hours: drink six cups of coffee a day and eat more sugar. Maybe they should have added regular trips outside for a smoke or maybe a snort of cocaine.

Doctors from St. Vincent’s Hospital in Manhattan develop an AIDS exposure treatment widget that will be available throughout New York State. They treat exposure “as a gunshot wound in terms of urgency”, saying that infection risk is reduced by 80% if treatment is started immediately.

The Social Security Administration gives a former IBM futurist his first job as CIO, putting him charge of a $1.3 billion IT budget. He’s a good blogger, so maybe that sealed the deal.

Just as I suspected: using Facebook is a good mental workout that keeps your mind sharp, while texting, reading Tweets, and watching YouTube make you stupid. Evidence abounds.

Fidel Castro editorializes on healthcare in Cuba, railing against Philips for offering discounts on medical equipment for Cuba and Venezuela, but backing off when the British government started investigating the patented software and parts it was sending there. They’re buying instead from Siemens, which is hardly shocking.

Ambulance chasers increased their TV advertising by 1,400% in the past four years.

The nation’s unemployment rate increases to 9.7% in August. Also up: the number of jobs in healthcare, with the industry adding 28,000 more last month. Since the recession began in December 2007, the sector has added 544,000 new jobs. The biggest growth areas are in ambulatory care, nursing, and residential care.

Given the current employment situation, it’s not too surprising that more college students are showing interest in healthcare informatics and information management. Colleges offer 270 accredited programs (53 at the bachelor’s level) and another 30 are expected to be certified by the end of the year. 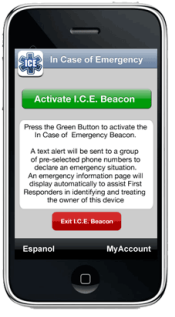 Here is a new iPhone app that sounds kinda cool, but I wonder if it will take off? For $2.99, you can buy ICEbeacon, which allows you to add family/physician contacts, allergies, medical conditions, and current meds. You also get a sticker to put on your phone, which alerts emergency personnel how to access the information. Personally, I don’t want to put a sticker on my phone. And do EMTs spend much time looking for patients’ phones?

Christ Hospital (OH) implements EpicCare Ambulatory EMR at its 35-physician medical group and regional therapy centers. The hospital is also giving community physicians the opportunity to purchase the EMR and connect to the hospital’s system. When I went to the hospital’s Web site, I noticed they have end-user training roadmaps that can accessed (not sure if that is by design or mistake). The level of detail is pretty impressive.

The local newspaper discusses the recent Epic live at Carilion Franklin Memorial Hospital (VA) and its sounds as if all went smoothly. The hospital’s IT director is quoted as saying, “No one has cried, and that’s a good thing.” Yup.

I see the AMA has set up a Facebook page to communicate updates to physicians and patients. I guess I am not social media-savvy enough to appreciate using Facebook to get news from groups like AMA or HIMSS. I’d rather use Facebook to learn what my friends are up to (stuff like, “I washed the dog today,” and “My daughter had her first soccer game”). I also got yet another request in my Inga inbox to set up an account. I guess I could and then post things like, “Boy, was that CIO I interviewed today boring!” or take some inane quizzes like, “Which shoe are you?” Or not.