From Winchester: “Re: Meaningful Use. I’m surprised we’re not seeing more debate on Meaningful Use given the stakes involved. Readers, I hope you’ll chime in: (a) are you delaying given the vagueness of MU? (b) what do you most wish was clarified? (c) do you anticipate major changes by December? (d) are your vendors giving you all the right assurances? (e) is there a scary scenario where you’ll have to tell your CEO you’re not going to achieve MU after all?”

From CDiff: “Re: NHS. Gives another meaning to rationing.” UK researchers find that prisoners are fed better than hospital patients, even though hospitals spend more on food. A quote: “If you are using food as a treatment, it’s not working.”

From Nicole: “Re: EHRs. You did a series of short interviews with several EHR vendors. Can you tell me where to find that?” The interviews with 12 vendor executives ran on HIStalk Practice as a five-part series called EMR Vendor Executives on HITECH. They’re here: 1, 2, 3, 4, 5.

From Back Pocket: “Re: Navin Haffty newsletter. The newsletter questions KLAS results. Aren’t KLAS results from clients? So, John Haffty is questioning Meditech client comments.” The Meditech consulting company principal complains that a particular magazine’s story about Meditech’s Version 6.0 is “more dramatic and pessimistic” than the KLAS report it cites, which he characterizes as contributing “to unnecessary and misleading negativity and one can only wonder whose purposes are being served.” I’m just happy than an HIT magazine didn’t cheerlead for the entire article, frankly. We know which self-serving interests are at stake: the magazine’s (to get and keep readers) and the consulting company’s (to get and keep Meditech customers). Meditech is at a crossroads with 6.0, which is a really difficult upgrade, readers have told me. It’s a natural time for customers to re-evaluate their options. I’m pretty sure they will not use a free magazine’s article as a key decision-making tool (nor a vendor’s free newsletter either, I would hope). I score the magazine criticism as Messenger 1, Would-Be Shooter 0. 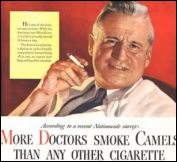 From Hank Kingsley: “Re: HIStalk logo. I don’t think the doctor should be smoking a pipe!” Man, healthcare IT people are so literal. It’s supposed to be ironic, OK? As I’ve explained before, I told the graphics person to give me something very 50s, with the reflector thingie, the square jaw, the old-school white coat, and the pipe with wispy smoke. Ward Cleaver, MD, you know?

From Beulah Balbricker: “Re: comments. Reader comments start off with ‘Re: some topic’. Are they initiating these remarks on their own or responding to specific news items?” Could be either. It’s like a letter to the editor that starts with their subject (which is whatever the Re: says) and a short comment, with all of that in quotation marks and in blue. Whatever follows is my reply. People usually e-mail about something I wrote in a recent HIStalk posting, but sometimes they just send something they want to say.

From Gary Numan: “Re: non-disclosures. A peer of mine was just asked to sign a non-disclosure to get trained in GA-released (not Beta) EMR software from Siemens, so it does exist.”

From Gregg Alexander: “Re: Healthcare Crisis News with Rosalie Michaels. Debuts September 1. A Colbert-esque take on the ‘crisis’, though Rosalie is far more attractive than Mr. Colbert.” I think it proves that everything is fascinating and amusing when a former Mrs. Arizona reads it while smiling and wearing a deep-cleavage clingy black shirt. It’s sponsored by the No Insurance Club, which is really a prepaid doctor visit plan that costs $480 for 12 visits per year, but only has a handful of doctors across the country (I’d be suspicious of doctors willing to work that cheap) and does not cover emergency room, hospital, or specialist visits (so it’s really more of a selective uninsurance program that covers doctors but goes bare on hospitals).

From The PACS Designer: “Re: As the Software as a service (SaaS) marketplace evolves, we are going to see low cost solutions appear for consideration as a service. One that has appeared recently is a security service called the Egress Switch. The UK firm offering this service uses e-mail addresses to validate each member of a secure network, and then encrypts the messages to meet the needed security level for the application being used by the validated members of the group.”

Atlanta Women’s Specialists puts out a press release about its EMR capabilities and its ability to exchange information with other medical practices via the Medicity Novo Grid. It can post and flag abnormal test results within 24 hours and to send prenatal records directly to the hospital. The practice will deploy to smart phones as well.

Epic finally works out a deal to get the Epic.com domain from the company that owned it (epicsystems.com still works too).

A MEDSEEK Webinar next Wednesday features an eHealth Director talking about whether your hospital needs one of those.

Atlantic General Hospital (MD) signs a deal for Keane Optimum Patcom and other apps. Another Keane client, 25-bed Montgomery County Memorial Hospital (IA), is mentioned in an article about IT investments in small hospitals.

The Columbus paper covers the diagnostic image sharing capability of some Columbus-area providers. A doc from the radiologist group complains that Ohio State isn’t one of them.

California can’t manage its fiscal crisis, but has time to legislate the speed with which managed care plans see patients. New regs require that routine PCP visits be scheduled within 10 business days, specialists 15 days, and urgent care appointments within two days. After-hours emergency calls must be returned within 10 minutes. Sounds good except physician payments keep going down and so does their number, both problems that can’t just be lawyered out of existence.

Another example of lawyers fixing everything: the attorney general of Kansas files suit against a non-profit hospital, its board, and its corporate parent. The charge: it’s going broke and will close. The AG is mad that the hospital hasn’t transferred its critical access designation to some other entity that otherwise couldn’t survive financially in Pawnee County. 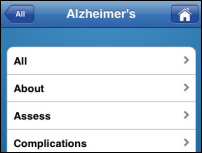 A nursing professor and her husband develop Nursetabs, a pocket reference for the iPod Touch. They’re in Michigan, I found out after only 10 minutes of digging through the rube newspaper’s site to finally find something that mentioned which of the 50 states Livingston is in.

Medsphere secures $12 million in a secondary round of VC funding, to be used for ongoing development and expansion efforts.

Speaking of Greenway, the company announces its 11th consecutive fiscal year of positive growth, ending its 2009 fiscal year with a 38% increase in sales over 2008 and 88% over 2007. Ever since I can remember, Greenway competitors have loved to discuss how the privately help Greenway wouldn’t be able to make it long term, that they would run out of money and never turn a profit. While higher sales do not necessarily equate to increased profits (or any profits, for that matter), you have to hand it to Greenway for its tenacity and continued growth. There are a lot of sunset companies out there that would have loved eleven years of positive growth.

Jeffrey L. Sunshine is named VP and CMIO of University Hospitals (OH) after serving in these roles on an interim basis since November 2008.

athenahealth’s Maine Operation Center is named one of the 2009 Best Places to Work in Maine.

Sheila M. Sanders takes over as VP for information services and CIO for Wake Forest University Baptist Medical Center (NC.) Sanders most recently served in a similar capacity at the University of Alabama at Birmingham.

If you are feeling the need to get up to speed on the upcoming ICD-10 coding system, you can review the new fact sheet being offered by CMS. I assumed it was going to be dry and technical, but actually found it to be easy to understand, nicely laid out, and informative.

QuadraMed names Bonnie Cassidy VP of Health Information Management Consulting Services, to direct the expansion of QuadraMed’s HIM services business and lead the company’s consulting team. Cassidy is the president-elect of AHIMA and formerly worked for CCHIT in certification development and program delivery.

A study finds that the quality of care provided by retail clinics is on par with physicians’ offices and urgent care centers, yet treatment costs were significantly less, although the study covered only sore throats, ear infections, and UTIs. The cost of care was 30-40% less than in a doctor’s office and 80% lower than in an ER.

If you are reading HIStalk, you are likely already involved with HIT. Fortunately, the Bureau of Labor Statistics says it’s a good field to find a job in right now, with employment for medical records and HIT technicians expected to grow faster than average for all occupations with an 18% increase through 2016. Within the field, there are different 125 job titles in more than 40 settings, but expect the most opportunities to be in integration, programming, project management, and training.

Stephens Memorial Hospital (TX) plans to add a new EMR in time to qualify for stimulus incentives. The 44-bed hospital will pay CPSI $443,286 for the new technology.

Look for state and local governments to increase their spending on HIT over the next few years. INPUT forecasts that state and local government investment in HIT will grow at a compound annual growth rate of 4.6% between 2009 and 2014, from today’s 7.6 billion to $9.6 billion. Spending on EMRs will grow from $850 million in 2009 to $1.85 billion in 2014.

As of this week, Medina General Hospital (OH)  is officially affiliated with Cleveland Clinic hospital. Now known as Medina Hospital, the community hospital is receiving $40 million in capital investments from Cleveland Clinic and will implement MyChart within the next year to 18 months. 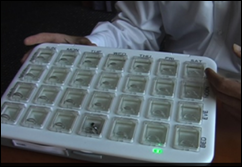 I am fascinated by this new “intelligent” pill organizer that beeps or calls / e-mails patients (or family members) to alert them to comply with treatment regimens. In addition to reminding patients when to take what medications, the MedMinder also produces weekly or monthly reports of missed medication. It’s being offered to consumers for $77 plus $30/month for support and wireless connection. Sort of pricey if you are on a fixed income, but kids of aging baby boomers might find it a worthy investment for their folks. However, I am sure that plenty of patients will find it annoying and will resent the intrusion.