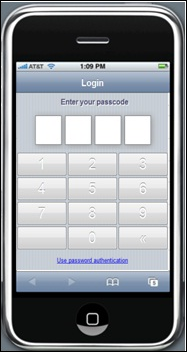 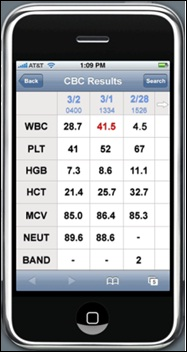 Many hospitals are using the iPhone as a tool for physicians to view clinical data. There are two ways to integrate the iPhone with an EMR:

The first option is the most common approach. Benefit: no development costs. Disadvantage: limited ability to customize the application to an organization’s specific needs.

We elected to build a Web app for the iPhone because we wanted to customize the solution to our needs and did not have funds to purchase an application from a vendor. Some of the features in our iPhone web app include:

It’s the subtle features that make the difference in user acceptance of software. This is especially true in healthcare for reasons too numerous to list here.

For example, physicians don’t like entering their username and password on the iPhone’s virtual keyboard, an approach many vendors use. Using the virtual keyboard takes a certain touch that is difficult for some physicians to master. We built a security feature that ties a specific iPhone to a specific physician to a specific PIN they choose. The PIN is only valid on the physician’s iPhone and is entered using a large, virtual numeric keypad that mimics an ATM. Users need only enter their four-digit PIN to log in.

The ability to ask physicians, “How would you like it to work?” versus “This is how it works” makes the difference between good software and software that physicians accept. This can best be accomplished by building the front end custom to your needs. While building software is harder and more difficult (for IT personnel) than buying vendor software, the ability to build initiative, easy-to-use software makes training, implementation, and support much easier. And the extra effort makes it much easier for the user to incorporate into their work.

It really is that simple. And why “generic” software requires much more training and process redesign than custom software. Another advantage of build versus buy is we can continue to deliver applications without being dependent on available capital dollars.

Future plans include using the iPhone with the Web app to record dictations and use of the iPhone for eMAR.

Mark Moffitt is director of information systems at Good Shepherd Medical Center of Longview, TX, proof that you don’t have to live in a big city to innovate in healthcare IT.

I think that it will be very difficult for all ambulatory and acute care provider organizations to implement an EHR by 2011 simply because of ramp-up time and change management considerations. It takes time for an organization not only to put together an implementation team, but to ensure that the appropriate governance structure is in place. The organization must also formulate a clear focus of where it wants to go, a plan for how it’s going to get there, and how it can assess its progress in getting there.

The organization must identity the members of the implementation team. Often, the organization must recruit additional personnel or retain consultants. In addition, there is training to take into consideration. Equipment must be ordered.  Appropriate telecommunications must be in place.  Interfaces must be implemented. In addition, simultaneous implementations of ambulatory and acute applications by a delivery system can be onerous, yet a certain amount of collaboration is necessary to promote maximum utility.

Vendors will have constraints as well. Many vendors are running very lean implementation organizations today; this minimizes the number of implementations that any one vendor can support at a time. It’s no different than any other manufacturing environment;  there are capacity limitations. Moreover, any rapid implementation cycle provided by a vendor should be carefully evaluated to ensure that the needs of various provider and patient populations are being adequately met.

It’s one thing to provide content satisfying a general med/surg model, quite another to meet the needs of a pediatric BMT program. Rapid provider adoption of workflows and clinical documentation applications will be effected if provider needs are considered during the initial build of content and workflows. Workflows should be designed to meet the particular needs of the provider, e.g., a diabetes clinic or a nephrology clinic. Such consideration can minimize costly re-engineering at a later point and contribute to the success of an implementation.

Hence, Meaningful Use criteria should:

CDS at the point-of-care is somewhat ambiguous and restrictive. Are we referring only to those kinds of CDS that present during CPOE or are we also considering alerts which reflect changes in patient conditions and availability of new data to alert a provider and inform a decision?

Meaningful Use calls for the capture of clinical data that can be queried and trended. I can appreciate the issue of data capture with which the Work Group has contended;  however, I feel that the objectives have minimized the value of these data and other data for data warehousing and analysis as well as for interoperability through such mechanisms as ELINCS. Hence, such data should utilize standard classification systems such as LOINC, SNOMED, and ICD-10CM to support data warehousing and analysis. Such requirements should be clearly called out so that provider organizations and vendors will incorporate this into their project plans.Such classifications are essential and often mandatory for reporting to quality, epidemiological and public health agencies and to various registries.  Meaningful Use should clearly call this out.

Moreover, there is far more information within a patient chart that could be subject to further structure and encoding. The use of standard classification systems or languages should be implemented so there is a consensual, meaningful and useful framework which governments, providers and consumers can use as a common language.Internationally endorsed classifications facilitate the storage, retrieval, analysis, and interpretation of data. They also permit the comparison of data within populations over time and between populations at the same point in time as well as the compilation of nationally consistent data. (http://www.who.int/classifications/en/) It appears to me that CCHIT and vendor organizations have avoided the issue of incorporating standard classifications or the usage of common classification languages.

Our goal should be to maximize the value we obtain by automating CPOE, clinical documentation, and result reporting.

Multi-media support capabilities are existent in many commercially available EHRs. Perhaps this objective could be moved to an earlier year.

It’s admittedly difficult to elaborate workflow efficiencies, but there are some examples

I apologize if any of my comments have been redundant or because of my failure to notice their having been addressed elsewhere.

Regarding the SubroShare(R) press release, Mr. HIStalk was understandably a little off in his assessment; this is not about a policyholder suing the healthcare provider. It is all about personal injury claims.

Subrogation is a legal remedy that enables an insurance company to recover amounts it paid for the care of its customer (the injured patient) in situations where the patient also receives payment covering the same services from a third party (the one that caused the injury to the patient and was sued by the patient).

The key here is the third party. There must be some other party that caused the injury to the patient and from which there is the possibility of payment resulting from a lawsuit (damages) or settlement of that lawsuit.

That said, unfortunately there are those patients that do not, and processes are not always what they should be and some claims "fall through the cracks" and are not identified properly up front. Consequently insurance companies are left to hunt down reimbursement in these situations.

I watched with sardonic amusement as a whopping 19% of readers voted that healthcare providers are sandbagging on IT to keep the public from seeing how profitable healthcare delivery is. Really? 19% of people who read this site think that patient care plays second fiddle to profitability when it comes to EHRs?

Given the way the question was phrased, I’m supprised the number was so high, but then I think the poll question missed the point, so maybe others saw through it as well. Some better questions might have been:

There are lots of trick questions like these, but the answer is always both ‘yes’ and ‘no’.

The simple truth is that a dying person will usually give their last dime for a shot at one more day. Healthcare in these circumstance is every man for himself. If you are sick or dying, you’re not going to mind that the person in the bed next to you is subsidizing your stay at a rate of $100 per tablet for over the counter drugs or 33% year in income taxes. Profitability can be created by reducing costs as easily as by increasing sales, but in these circumstances, money doesn’t mean much.

Do you really think that there aren’t people profiting in healthcare from deals that they’d rather the public not know about?  (Thank god we have people like Mr H to keep us up to date on the salaries of major ‘non-profit’ executives). But why stop there? What about those doctors with lucrative research deals with pharmaceutical companies, or pharmaceutical companies who perk doctors who use their products?

Now I have no idea if such profiteers are going to be exposed by EHRs.  Indeed, it seems EHRs can be their own unique breed of profiteering. But let’s be honest, we all know people who profit from healthcare, and no matter what happens next, single payer, socialized medicine, co-ops, EHRs, RHIOs, status quo, bankruptcy of Medicare, etc., there will always be people profiting from healthcare.

The real question is: is it fair? And it is this question, no matter how simply stated, that we can’t possibly come to agreement on. So we’ll let the market decide for us. I bid 10% of my salary. And rising.