From Cliff Kirtland: “Re: Interesting use of funds in Health Technology Center’s federal filing forms. I thought you might be interested given Molly Coye’s next role as CalRHIO CEO. Can they afford her?” Non-profit technology research organization HealthTech took in nearly $4 million in 2007, lost $700K, and paid CEO Molly Coye $630K and the COO over $400K. CalRHIO’s records show that former CalRHIO CEO Don Holmquest (now in “a senior advisory role” with CalRHIO and not listed on its site) was paid $276K. Either Molly’s taking a huge pay cut or CalRHIO is upping the ante. She’s also board chair of CalRHIO. Whatever’s left of HealthTech is going to Public Health Institute, another research non-profit (it took in $88 million in 2007 and its CEO made $380K). I need to set up HIStalk as a non-profit so I can make some real money.

From Mike Quinto: “Re: big box medicine. Dr. Halamka blogged about a local hardware store. We should support the Green’s Hardwares of the world, avoiding the big box stores that have standardized the experience and limited the menu to keep costs down. It occurred to me: aren’t we working toward standardized medicine that will give every patient the same experience at every doctor, making medicine have that big box feeling to keep the costs down through standardization?” It’s probably the same: people will moan about losing local restaurants and stores that bring back fond memories, all while spending their money at chain restaurants and Wal-Mart. Still, the masses get to vote with their dollars and their feet, and if they don’t like cookbook medicine, they will seek alternatives that others will be financially encouraged to provide. Maybe what should have been done with stimulus billions is to find a better, cheaper, faster way to educate physicians, although with loose controls on how they are paid, they would all be lighting up the sky with profitable X-rays and raising the healthcare tab even higher instead of lowering it through increased provider supply.

From CogNwheel: “Re. insurance companies. You have got to comment on this PR piece from United. An HIT vendor telling everyone that if the government and companies would only buy more of their stuff, they would all save money and the American consumer would directly benefit.” UnitedHealth says healthcare could save $332 billion over 10 years if providers updated their technology to use something like its own, although it also estimates that commercial payors like itself would reap $100 billion of that benefit. They didn’t mention specifics, but they do own Ingenix, which offers technology to providers.

The DEA is helping LAPD with its Michael Jackson investigation by analyzing the state’s controlled substance prescription database, trying to figure out who prescribed the propofol found in his house that may have killed him.

Bill O’Toole got so many responses from readers about his HIT Moment With that he decided to become an HIStalk Platinum Sponsor (sounds odd, I know, but people interviewed here are always shocked at how many old and new acquaintances they hear from). So, welcome to O’Toole Law Group PC of Duxbury, MA, an HIT-only firm involved with acquisitions, licensing, intellectual property, and contract negotiation on both the provider and vendor sides. I don’t know of many HIT-only attorneys, so if you need one (and every vendor and provider does every now and then), get in touch with Bill.

A British doctor helping out Royal Free Hospital with its Cerner implementation says he saw doctors “almost in tears” with frustration over the project. I don’t exactly know what that means since you’re either crying or you’re not, but it sounds intentionally dramatic.

Rural health center operator HealthReach (ME) will get $1.3 million in stimulus money, most of which will be used to implement an EMR. Since I’m salary-fixated all of a sudden, I’ll report that its CEO made $50K last year according to its federal records, making it clear that actually delivering care isn’t as highly valued as talking about it. A lot of administrative overhead wears suits and sits in plush offices.

A former Cigna public relations VP testifies to Congress that the company’s underwriters intentionally pushed small businesses that had filed expensive claims to drop their Cigna policies by jacking up their premiums. He quit after Cigna waffled on paying for a teen’s liver transplant, then changed its mind right before the patient died. He warned that the insurance industry will kill meaningful healthcare reform, saying, “You cannot trust these guys … What we have is rationing by corporate executives who are beholden to Wall Street.”

Cumberland Consulting Group, new to the Healthcare Informatics 100, brings on Tom Hogenkamp as a partner. 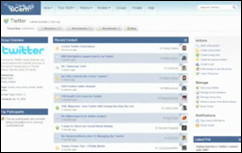 Cerner will roll out uCern later this summer, a social networking site for customers that will also offer a customer-modifiable documentation wiki and screencasts.

An article by Christiana Care CIO Steve Hess credits its GetWellNetwork rollout with increasing patient education utilization by 127% and improving patient satisfaction related to having information explained by 23%. Patient education pathway items that are triggered in the EHR alert the patient on their in-room TV, reminding them to watch the educational material until they have done so.

Mount Sinai School of Medicine is seeking “the Holy Grail” mobile device for its doctors. It sounds like they believe the iPhone would be it if Cerner and Epic would develop clients for it. They’re also expecting good things for the Kindle e-book reader.

Maybe Cerner and Epic should follow the lead of Meditech in offering an iPhone client, lauded by Doylestown Hospital (PA) CIO Rick Lang as a key reason that its physicians have flocked to the iPhone and gained “major workflow improvement” as a result.

From Weird News Andy: a Tennessee boy is arrested after sheriff’s deputies find $5,000 worth of medical supplies, an oxygen machine, and a purse in a camper on his mother’s property. Paramedics reported that the items were stolen from their ambulance while they were treating the boy’s mother.

David Brailer says that the government’s lack of specificity about how stimulus money will be paid out to providers is hurting EMR adoption as potential customers wait and see. He also predicts that meaningful use criteria will be loose even if that dilutes the whole point of having them. “They’ll go for the big tent as opposed to a narrow solution. That’s not good policy, but that’s the politics of the matter." The CNN article mentions EMR licensing expense and the potential use of VistA, quoting Medsphere CEO Mike Doyle in comparing the $9 million the State of West Virginia paid it for eight hospitals vs. the $90 million West Virginia University (which he incorrectly called the University of West Virginia) paid Epic. “If Obama is serious about this, he won’t be able to do it $90 million at a time.”

An overwhelming 81% of you don’t believe that healthcare providers are sandbagging on IT to keep the public from seeing how profitable healthcare delivery is, according to my most recent reader poll. New to your right: should hospitals have to use CPOE to meeting meaningful use criteria?

Seattle Children’s Hospital says healthcare applications vendors are foot-dragging on certifying and supporting their applications to run in virtualized mode.

University of Florida’s Doctor of Pharmacy program will require students to own either an iPhone or iPod Touch.

I would hope that by now healthcare providers have figured out that WEP security isn’t adequate for wireless networks, but in case any need convincing, here are step-by-step instructions on how how to crack WEP passwords.

A Seattle data center fire on Friday takes down a bunch of local IT systems, including those of Swedish Hospital.

Researchers at Carnegie Mellon University develop a $2,900 mobile kiosk whose six sensors check for problems and initiate e-mail contact with the patient’s doctor if needed. The sensors measure blood pressure, balance, hand grip, hearing, and visual acuity. It also creates a personal medical history and may eventually include medication reminders.

An employee at Saint Alphonsus Regional Medical Center (ID) couldn’t resist opening the attachment in Michael Jackson e-mail spam, launching a virus that crippled several hundred hospital computers. The hospital spokesperson said, “There is a variety of things happening — slow log-ins, programs shutting down, glitches … We have a whole team working on it. It’s a major headache for us but it hasn’t hurt patient care. We have stopped the spread, and we are in clean up mode now. It’s been a bear for the IT people.”

UMass Memorial Health Care and Bethesda Healthcare System each sign multi-year contracts for Soarian, Siemens Healthcare’s Web-based HIS. UMass is implementing Soarian Clinicals, Financials, and Quality Measures as part of their seven-year agreement. Bethesda’s nine-year contract is an extension of its 25-year relationship with Siemens and includes migration to  Soarian Clinicals, Critical Care, ED, and several other applications.

Spectrum Health (MI) and Medicity announce they’ve successfully deployed a platform that enables the secure exchange of health information between hospitals and physicians. More than 75 physician offices are now receiving data electronically from Spectrum Health and 70 more are in the process of being connected.

GE Healthcare and InterComponentWare (ICW) sign a strategic agreement to integrate and co-develop their HIE solutions.

HIMSS announces four new officers and four new board members to its board of directors. Dr. Barry Chaiken of DocsNetwork Ltd. takes over as chair.

CalRHIO names Molly Joel Coye, MD, MPH as its new president and CEO. Coye was an original CalRHIO founder and has been chair of the board of directors since 2007. She was also founder and CEO of the research non-profit Health Technology Center.

AirStrip Technologies and CliniComp agree to pair both companies’ product offerings at hospitals nationwide. AirStrip provides real-time remote access to labor and delivery and intensive care data via mobile devices. You may recall AirStrip was one of a few companies given the given the opportunity to demo their iPhone application at the Apple WWDC. CliniComp is a provider of documentation and EMR systems.

A CHIME survey of 335 CIOs finds that almost 60% of their organizations use CPOE at some level. Physician adoption continues to be low, with 45% of the CIOs indicating their physicians are using CPOE for just 20% or fewer orders. A mere 16% claim physicians are entering orders 90% or more of the time. CHIIME members tend to come from more progressive institutions, which suggests their CPOE adoptions number are likely higher than everyone else’s. Any way you look at, full CPOE adoption has a long way to go.

I’m planning to take a couple of days R&R, leaving Mr. H to fend for himself (which he does perfectly well, but my ego requires that I maintain the illusion that I am indispensible). In between fireworks, family gatherings, and adult beverages, I hope you remembered to wish the country a happy 233rd birthday!