From The PACS Designer: "Re: 2008. TPD is blown away by the success in 2008 for HIStalk! Never did I expect the famous healthcare luminaries that agreed to be interviewed! Wishing HIStalk and everyone else a better and more prosperous 2009. Happy New Year!" Thanks to TPD for his regular-as-clockwork, bite-sized educational postings. Keep in mind that he and I have never met or spoken – he posts just to help educate HIStalk’s readers. Thanks, TPD!

This will be a little short since I’m just getting back in after a short trip to KCMO. The barbeque at the couple of places I tried was good, even if the sauce they bury it in is jaw-clenchingly sweet and heavy, more like ice cream sundae topping than anything you should put on meat (like KC Masterpiece or what they put on barbeque down south at the Sonny’s chain – mostly corn syrup, molasses, and fake liquid smoke). Once you scrape that off, it’s pretty good. By state, I’d rank the barbeque as TX, NC, MO, GA, and TN (OK, AL, and AR should be in there somewhere, but my experience is limited).

Andy sent a link to a story about struggling hospitals, with the focal point being Shands AGH in Gainesville, FL, the town’s first community hospital that will be shut down in 2009 to save money, 12 years after it was bought by Shands Healthcare. The CEO of Shands blames bad debt and reduced Medicaid payments.

I found Greg Hall’s analysis of the crippling effect of institutional debt in healthcare fascinating, the idea that industries that created phantom wealth in the form of leveraged debt and tax advantages. "Examine the notion of ‘capacity utilization.’ Without debt, excess capacity is not viewed as a problem. Consider the local fire department. Paid staff resides at stations 100% of the time, regardless of emergency conditions. 100% state of readiness. Imagine if the fire station had to pay a mortgage: it would then be forced to convert its unused (excess) capacity to a cost, and in turn focus on raising revenues to support its excess capacity. This is exactly the case with hospitals (and many other large U.S. businesses)." It’s dead-on for hospitals. Every one I’ve worked for, including those that showed a huge ‘surplus’ (non-profitese for ‘profit’) still could not finance even predictable costs through operational profits; they were always going to the bond market. And, I’ll throw in my psychological theory that supports Greg’s concept: the hotshot MBA CEOs who now run many/most hospitals instead of the previous crop of MHA-trained ‘administrators’ aren’t satisfied with just keeping a hospital running efficiently and serving the community; they have to show their for-profit counterparts that they’re business sharpies, so the preferred outlet is community dominance and building massive Taj Mahospitals. That’s the coin of the realm when it comes to community hospitals: beating your competition and erecting awe-inspiring buildings that generate obvious community pride, but with highly questionable community value. One might postulate that much of today’s economic ills were caused by B-school grads, many of them who found their way into healthcare as their widget of choice, who were taught that growth is everything when it comes to businesses, stocks, and assets. Just making a nice profit is not sexy enough. As a result, the churn of leverage and acquisitions and vertical integration caused a mess that will not be easy to get out of, even with those $1 million and up hospital CEO salaries. Hospitals, unfortunately, were just as greedy, just less honest about it in claiming it was all for their communities, large chunks of which already couldn’t afford their services.

A reader sent over a BlueCross BlueShield of North Carolina memo that asks doctors to support elimination of "highly problematic privacy provisions" that it claims could be included in the economic stimulus package. I mentioned the Confidentiality Coalition’s similar demands last week (BCBS Association is a member of that group and that’s mentioned in the memo). Some items they don’t like: requiring patient authorization for disclosing PHI for treatment or payment purposes; requiring EMR users to keep records of non-verbal PHI disclosures; and allowing individuals to opt out of interoperability projects like HIEs and RHIOs (!!). That’s about as arrogant as the sham that BCBS is "non-profit" while sucking in huge chunks of healthcare expense for administrative functions that seem to more often hinder it rather than help it. All I know is that BCBS makes a ton of money (nearly $200 million profit in one year not too long ago in NC alone), pays its executives ridiculously handsomely, and occupies buildings that are decidedly non-Spartan. 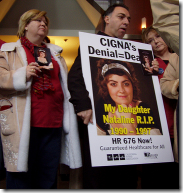 Hollywood will surely make a movie about this: Cigna refuses to pay for a liver transplant for a 17-year-old leukemia patient, saying the procedure is experimental, even after the patient’s doctors report a six-month survival rate of 65%. Nurses and local citizens picket the insurance company, after which Cigna grudgingly agrees to pay for the procedure "out of its own pocket." Hours after Cigna relents, the patient dies before the transplant can be done. The family is suing. This is where our American cultural view of death kicks in: from what I’ve read, other countries accept death when it’s inevitable, while here, no expense is too great to prolong life even for a short time. A liver transplant costs several hundred thousand dollars and uses a donor liver that someone else won’t get. I don’t know the case, but to an objective (i.e. non-family) observer, would that patient have been the best use of the limited resource of dollars and livers? It would be nice not to have to make that choice, but insurance requires balancing unlimited demand with limited resources, with the result of doing that poorly what we have today — huge costs for heroic but ultimately often unsuccessful interventions, especially in the elderly in the last few weeks of life.

North Mississippi Medical Center will replace its EMR system at a cost of $28 million, approved this month by the state.

The New York Times covers the city’s subsidized rollout of eClinical Works and its pay-for-performance project. "As for Dr. Benovitz, he said that if the city had not recruited him, he would still be using paper charts, which had a comforting tangibility, a record of life that could be held in his hand and paged through like a book. But he was happy to invest the roughly $40,000 over three years to implement the project in exchange for the city’s expert advice, though it has temporarily slowed him down, with two patients filling the time in which he used to see three." Unless somebody convinces medical schools to drop their income-protecting student enrollment quotas, let’s hope the 33% reduction in capacity really is temporary since the EMR won’t do much for patients who can’t get an appointment.

I might be the only person left who remembers the Atlanta-based technology company Healthdyne. The company’s founder, Pete Petit, is named board chair of Georgia State University, where he earned his MBA. 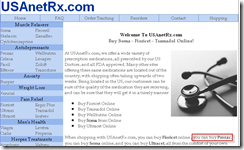 An interesting test case may set a precedent for the practice of telemedicine. A doctor prescribes generic Prozac for a 19-year-old without examining him after the Stanford student requested the drug via an Indian Web site (now gone, but I found an image in an archive above), which forwarded the request to the doctor as its contractor. The student killed himself. The doctor will go on trial for practicing medicine in California without a license, but the prosecution has to prove that the student was in California when he requested the drug and that it’s illegal for an out-of-state doctor to write and fill prescriptions across state lines. With all the talk about how to streamline and nationalize healthcare (not what it’s being called, but what it is), you would think that someone would suggest removing all the state-specific regulations relating to privacy, patient care, prescriptions, state billing, etc. and replace them with a national standard. Nobody talks about the inefficiency they create and the questionable benefits they provide.

OK, I’m beginning to think everyone involved in the would-be Emageon-HSS deal is nuts. The fighting lovers are embracing again, with HSS saying the consummation will happen in February 11, financed by Stanford International Bank after all. Why did Stanford bail out last week, then? According to the CEO of HSS, "This extension will also allow us additional time to complete our integration plan for our technologies." Maybe I’m clueless, but I don’t see that the integration plan has anything to do with the legally binding agreement HSS made to do the acquisition by an already-passed date. Plan whenever you want, but when you sign to do a deal with a given set of terms, the negotiation is over. Blaming the bank seems ridiculous since it has the same parent company as HSS. At least Emageon will supposedly get $9 million of HSS’s escrowed money if the deal falls through again. Is this saga really going to give prospects a good feeling?

Have a good New Year’s. Fun stuff coming! (HISsies, HIMSS stuff, and so on). Thanks for reading.