From DeEmailWontGoAway: "Re: Cerner. Neal Patterson had an employee town hall on Thursday. In it, he put the infamous e-mail back up on the screen and discussed why he was right then and why it is still right. He also stated emphatically that Cerner WILL lay off people before the end of the year — believe the exact quote was by the end of the year ‘we will need FAR less EMPLOYEES than we currently have on the payroll.’ Could be the right play, but the dude’s style is poor. While he buys a French villa and takes off the whole summer, he needs to forget about the parking lot and pizza guy." I’m on the fence for the first e-mail: it was obviously blurted out without much thought and sounded cold, but it was mostly management that he was ripping and many folks have told me off the record that he was right. Fact is, the economy has taken away whatever upper hand employees believed they had, so he can say whatever he wants, like always. Shareholders (many of them employees) and customers demand high performance, so you won’t hear them complaining about his whip-cracking. The employees who regularly rip the company (sometimes humorously) on JobVent have the same options as employees everywhere – stay or go, thus proving one of you wrong. Complaining is just wasting time instead of making one of those two decisions and moving on.

From Bobby Orr: "Re: Neal Patterson. Nice job, Neal, providing positive leadership comments in a time of crisis – gloom and doom. He mentioned eliminating insurance companies as they exist today, which is interesting because he is now running an alternative one for his employees that does not save the employees any money vs. a traditional HMO."

From The Alchemist: "Re: Neal Patterson. Folks, I am staunch die-hard metrics man, and although statistics do a great job of lying to support your point of view, I can’t figure out the lie in the World Health Organization’s Report. The United States is the #1 country out of 191 that spends the most money per capita in International Dollars for health expenditures. I can’t figure out where the lie might be in this statistic. The bang U.S. patients are getting for our healthcare bucks ranks the United States in Overall Health System Performance #37 (N + 191) only to redundantly mention that Cuba is Number 39.  The United States is not only ranked #1 for health expenditures, but spends twice as much in International Dollars as Switzerland that ranks #2 for health expenditures and #20 in Overall Health System Performance. If measures applied to our economy in recent days cannot ‘fix’ or ameliorate the situation, then how do we ‘fix’ the United States health system? Throwing money at it doesn’t appear to make things better."

From From Afar: "Re: Misys. Misys and Allscripts have both done layoffs this week. Layoffs at Misys were not mostly management positions. Many positions were project management related positions. There were 11 confirmed casualties from R & D alone, many of which had 10 years or more of service each with the company. There have been announcements about a few executive vice presidents not moving to the new company. Sales did layoffs the week just prior to the big joint sales meeting they had earlier in the week. Management will not release the total number of layoffs."

Yet another business idea I wish I’d thought of: I was buying gas today and saw a pulpy newsletter that featured nothing but local arrest records and mug shots for just $1. The first thing I’d do is raise the price.

A Louisiana nonprofit isn’t finding many takers for the federal government’s help (financial and otherwise) to implement EMRs. It’s supposed to get 200 volunteer practices, but has only 14 so far.

Sponsor Web cruising: Dewey Howell, MD, PhD of Design Clinicals spoke at a recent medication reconciliation program and the link to his presentation is on the company’s site. 1450 inc. is offering several products of interest to Dragon NaturallySpeaking healthcare users. Healthia Consulting will be at AHIMA and MGMA in the next few days and then AMIA after that, so drop by and thank them for supporting HIStalk. Intellect Resources has a cool newsletter that’s always fun and chatty, so you can read the current and back issues and check out the positions they’re recruiting for. Our consulting friends at Renaissance Resource Associates are looking for some experienced talent in Epic, GE, and other major apps, so have a look. Teramedica, which has several patient-centric software applications, has a couple of job openings and has a signup for its electronic newsletter. The Revere Group will have executives in attendance at Midwest HIMSS later this month, the Blue Cross Blue Shield PMO Summit, and the Jive Software road show on social media. Thanks to all of those companies for sponsoring HIStalk.

Speaking of DNS 10, I’m convinced that voice recognition has finally met those Star Trek expectations. I see it’s available for as low as $70, so I’m thinking about giving it a try.

Norwalk Hospital (CT) honors GE’s Jeff Immelt and heaven’s Paul Newman for giving it money, or so I assume given veiled platitudes referring to "creative, compassionate philanthropy." Newman, for sure. Immelt, I can’t say because I don’t know.

Marvin O’Quinn announces his departure as CEO of Miami’s Jackson Health System, heading out to be COO of Catholic Healthcare West. He mentions Jackson’s Cerner implementation in his short goodbye letter. That’s not why he’s leaving.

Welcome and thanks to new HIStalk Platinum Sponsor Ingenix of Eden Prairie, MN. I usually mention the main offerings of a sponsor company for those who might not be familiar with them, but I’m not sure that’s necessary here since they’re widely known and it’s a long list of products and services they offer to healthcare. Highlights: coding, revenue cycle management, clinical and cost management, demand forecasting, and consulting. White papers and e-newsletter here. Thanks to those folks for helping power the mighty Wurlitzer keyboard that is HIStalk.

You will likely hear much Misys/Allscripts news next week (in fact, you will hear some of it directly and early on Monday morning right here on HIStalk, so look for that). In the meantime, mark this on your calendar: I’ll have Allscripts Chairman and CEO Glen Tullman in a live chat Wednesday, October 15 at 7:00 PM Eastern time (it’s the first time we’re trying this – sample of what it will look like here). Glen will answer questions directly from HIStalk readers. I have to confess: Allscripts was one of those companies that I griped a little about recently because they lumped HIStalk and other blogs as some kind of wacky sub-journalism instead of industry pros who happen to write online, but they’ve done a 180. Anyway, more from them on Monday morning and in the Wednesday chat. If you have questions and won’t be able to join us online, you can e-mail me your questions for Glen.

The special dividend for Allscripts shareholders when the Misys merger is completed will be paid on October 17 for $5.23 per share, with a record date of October 9. 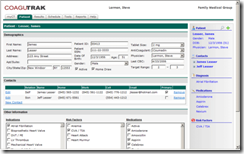 One of the two Harvard grad students who just won Siebel Scholar awards is working on disease management software for doctors and patients.

California, that big state whose movie star governor is demanding federal dollars because the state (like the country) can’t live within its means, could have saved money had it not passed a law allowing resigned state employees to get cash for unused vacation and work credits. One prison doctor got four years’ pay when he quit after 10 years, $815,000 for unused vacation and on-call pay, with no records to back it up. Private companies don’t allow accruing that kind of amount, of course, and especially under California’s policy of paying at the most current (usually highest) pay rate. Also mentioned is a minimum security prison nurse who earned over $200,000 in overtime in one year, bringing her one-year pay to $321K.

GE’s Q3 earnings dropped 22%, surprising no one since suckitude of that magnitude had been pre-announced. GE Capital, which the company kept saying was doing great while every other industry player self-destructed, is finally blamed. One funds manager said GE has a lot of good businesses and one underperformer – GE Healthcare, about which even usually cheery Jeff Immelt acknowledged as "a challenging quarter at Healthcare." Time to break GE into far more valuable and nimble individual pieces if you ask me, especially if its other businesses are as hamstrung by corporate bureaucracy as healthcare, which as I always say is the elephant’s graveyard for once-decent products (the first-to-worst KLAS phenomenon that’s unique to GE).

Those little fellows who whip horses for a living now have a PHR. I’m pretty sure they don’t shoot them if they break a leg.

Teleradiology and PACS vendor Medweb sends employees to Pakistan on a humanitarian telemedicine mission as part of the US government’s Digital Freedom technology sharing initiative.

It’s HIT’s version of Fisher vs. Spassky: Dolbey is sponsoring The Coding Game at AHIMA, pitting coders against computers. Too bad it’s not in Las Vegas – the bookmakers would be all over it.

MD Anderson, trying to forestall a senator’s demand that it account for its charity care practices in his investigation of hospital tax exemptions, sends Sen. Charles Grassley at least some of what he asked for. He is considering requiring tax-exempt hospitals to provide at least 5% of revenue on charity care (MDA spends 7.6%, but I’m guessing that includes unreimbursed care at ridiculously inflated "list prices" that don’t reflect cost). MDA got fingered in a Wall Street Journal article called "Cash Before Chemo" that detailed a patient’s plight when MD Anderson refused to take her insurance and demanded $105,000 in cash before it would admit her. Everybody wants hospitals to run like a business, except when they want them not to, a situation I ineloquently described in my recent Inside Healthcare Computing guest editorial called Every Time I Say It’s About Patient Care, You Tell Me It’s a Business: Healthcare IT Lessons Learned from North Dallas Forty. I bet Mack Davis never expected anything from his otherwise anemic film career to be used to make a healthcare policy point.

Odd hospital lawsuit: a 77-year-old woman hits the gas instead of the brakes in a hospital parking lot, crashing into the radiation department and killing the hospital’s radiation chief and a secretary. The radiation chief’s widow already sued the driver, who settled without paying anything, but she’s now going after the elderly woman’s doctor, three of his partners, and the practice they work for, claiming they didn’t tell the woman to avoid driving while on medications. Her lawyer says he’s optimistic that he can get more than $10 million. 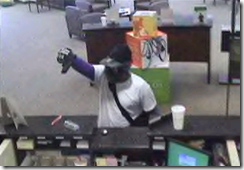 Also odd: a Yale-graduated surgeon who failed his board exams for five consecutive years and who lost his surgical privileges and medical license after three months of practice at Meadowview Regional Medical Center (KY)  is arrested for the armed robbery of an Austin, TX bank, while wearing a gas mask as a disguise (picture above). Among his medical adventures: leaving a patient under anesthesia for 1.5 hours while arguing with a colleague, clipping the bile duct on two patients, and severing a patient’s carotid artery. Looks like he had filed for bankruptcy as well.