HHS publishes ownership data for all 7,000 Medicare-certified hospitals, which it says will help researchers and enforcement agencies identify owners with a history of poor performance, support research related to cost versus ownership, and allow consumers to make better decisions.

Today’s post will be short and Monday’s may be entirely absent given the paucity of news. Enjoy whatever holiday that you celebrate, if any.

Speaking of which, I’m distressed to see companies laying employees off right before Christmas. I can only assume that they are clueless, heartless, or so poorly managed that the best option was to upend the lives of members of their “company family” who now face a bleak holiday season. There’s no good time to be laid off, but a business must be sinking fast if they couldn’t wait until January to jettison their human ballast. Standing in front of holiday decorations to tell your family that your livelihood has been ended while simultaneously dealing with personal shame and a sense of betrayal can’t be fun.

I never look at Google Analytics stats for HIStalk, but I brought it up today to find something. I was surprised to see that while 89% of unique visitors since August 1 (when I installed the new version of GA) were from the US, China was the second-highest country at 3%, followed by Germany, India, Canada, and the UK. I’m curious about what a visitor from China would find interesting about HIStalk.

I think this is the first time that I’m so unenthused at attending a HIMSS conference that I haven’t registered or made travel arrangements by year’s end. The biggest single booths booked so far are Epic (7,200 square feet) and Oracle Cerner (6,400). Other large ones are Microsoft, EClinicalWorks, Athenahealth, InterSystems, and Philips.

January 19 (Thursday) 2 ET. “Supercharge Your Clinical Data Searches.” Sponsor: Particle Health. Presenter: Paul Robbins, MSMBA, VP of product, Particle. Particle’s team will preview the exciting results of Specialty Search, a new condition-specific record locator service. This webinar will review how to collect patient records from top Centers of Excellence across the entire country; how healthcare organizations of all types are benefiting from Specialty Search capabilities, using Particle’s simple API; and why a focused search of chronic condition data — in oncology, cardiology, endocrinology, orthopedics, and more — has an outsized impact on care outcomes.

UK doctors warn that “privatization of the NHS by stealth” is occurring as a subsidiary of US health insurer Centene has quietly acquired 67 GP practices, making it the largest provider of such services. Centene also acquired a 50-hospital private health group. Advocates, some of whom are former NHS executives who took jobs with Centene-related businesses, tout innovation and cost reductions, but prior experience with Centene’s similar operations in Spain suggest that expectations didn’t match reality as cost savings didn’t materialize and the company has started divesting non-core assets to boost profits.

In 2023, the pudding is that you create rock-solid cash savings for buyers of healthcare. I think that means that many worthwhile point solutions that have excellent offerings will need to work quickly to club up with aggregators or find other means of going to market with guaranteed easy savings math for unsophisticated benefits buyers. It will also mean efficiency will begin to trump effectiveness.

US life expectancy dropped again in 2021, going back to 1996 levels even as other countries saw their average lifespan rebound. Experts say the US did so much worse because of low COVID-19 vaccination rates, drug overdoses, and the generally poor health of its citizens. 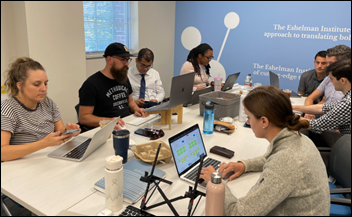 Omnibus Appropriations legislation, if approved by the Senate and House, would extend Medicare telehealth flexibility and Acute Hospital Care at Home for another two years. Government funding expires at 11:59 p.m. Friday. 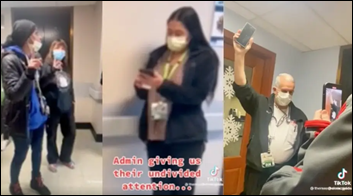 The New York State Health Department launches an investigation of ECMC Hospital (NY) after a video goes viral in which its psychiatric nurses confront administrators over staffing levels. The nurses, who say they are caring for an average of 53 patients each, first ask an unidentified administrator about staffing plans for the week, during which the administrator doesn’t look up from her phone. They then knocked on HR’s door, where nobody answered, and then tried to see the director of nurses, who was on vacation. The hospital blamed the issues on its inability to discharge patients to state-supported programs and the low reimbursement rate for Medicaid patients. 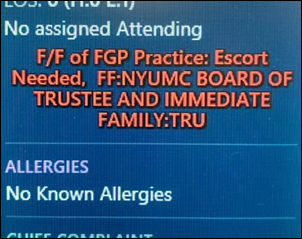 Doctors at NYU Langone’s ED say the hospital gives VIP treatment to wealthy donors, politicians, and celebrities who sometimes cut the triage line when employees see “friends and family” flags in the EHR that the patient should receive preferential treatment. Hospital trustees can use a dedicated phone line to alert staff that they are coming, after which administrators call and text doctors that a high-priority patient is on the way. Two interviewed members of NYU Langone’s board of trustee members told the New York Times that their ED care was fast and excellent, but they assume that all patients are treated similarly. Some doctors have quit or been fired over the hospital’s VIP policies and ACGME has placed the ED on probation. The hospital responded by hiring a defamation law firm that is best known for threatening news organizations with its expertise in “understanding the obstacles that the First Amendment poses for defamation plaintiffs.” 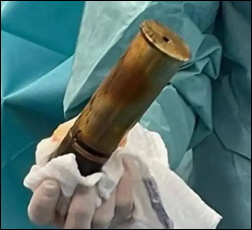 A hospital in France evacuates in a bomb scare that was triggered by the arrival in the ED of an 88-year-old man whose chief complaint was the World War I artillery shell that had mysteriously found its way into his rectum.