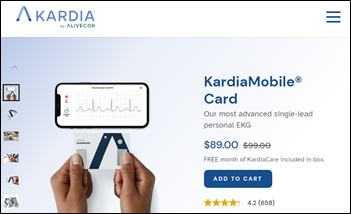 The US Patient and Trademark Office Patent Trial and Appeal Board  rules that three AliveCor heart monitoring patents should not have been issued. The ruling follows a challenge by Apple, which had been found to have infringed on those patents following an AliveCor complaint.

PTAB ruled that the heart monitoring technologies for wearable devices are not patentable.

The International Trade Commission is set to decide by December 12 if importation of Apple Watches should be banned over the dispute.

AliveCor added ECG capabilities to its KardiaBand add-on watchband for the Apple Watch in 2017 and demonstrated the technology to executives of Apple, which rolled out similar built-in technologies the next year. AliveCor retired the band in mid-2019 and introduced new app-powered, non-continuous personal ECG products, including this year’s KardiaMobile Card.

From Kendra: “Re: HLTH. Had a major data breach right before November’s conference in Las Vegas and registration information is being sold on the dark web.” Unverified. I’ve reached out to HLTH (which does not make it easy to contact them) for confirmation, but haven’t heard back. Personally, I wouldn’t be too worried about it anyway since conferences sell registrant information widely and hackers can’t be any more annoying than vendor spammers. UPDATE: HLTH says no breach occurred. 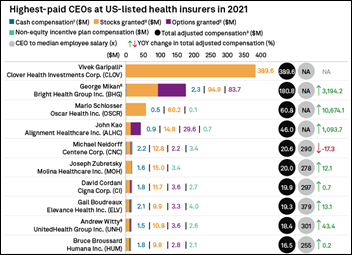 From Sly Devil: “Re: publicly traded health insurer CEO compensation. Check out this list from S&P Global.” The top-earning health insurance CEOs for 2021 were those of buzzy newcomers Clover Health ($390 million), Bright Health ($181 million), and Oscar Health ($61 million). At least much of that comp was paid as since-tanked company shares — CLOV is down 74% in the past year, BHG is down 79%, and OSCR has slid 72%. Clover Health’s board members include Chelsea Clinton, a former CMS director, a Henry Ford Health System exec, and 7Wire Ventures partner Lee Shapiro, all of whom seem to have consumed Theranos-like Kool-Aid in overseeing this train wreck that went public in 2021 with the help of “SPAC King” Chamath Palihapitiya at a valuation of nearly $4 billion. Billionaire Clover co-founder and CEO Vivek Garipalli previously made a fortune buying three bankrupt New Jersey non-profit hospitals to form CarePoint Health, which took the hospitals out of all insurer networks to become the most expensive health system in the US, earning him an $11 million Hamptons house on Billionaires Lane when he was in his mid-30s. CarePoint then donated the hospitals to form a non-profit, which competing hospitals said was purely to give Garipalli and partners a way to escape huge liabilities and take a tax write-off after pocketing $160 million. I’ll remind myself to blame the game, not the player, but I also note that $300 billion annual revenue UnitedHealth Group compensated its CEO – who actually has a British knighthood for being rich — with “only” $18 million while the failing startups were making it rain for theirs. 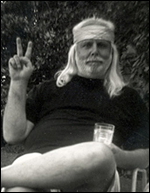 From Conflagration: “Re: Neil Pappalardo. I’m hearing that he officially retired from Meditech as of November 30. He’s still board chair and president of the trust, but even as a formality it’s still a noteworthy milestone that he is no longer an employee of the company he founded.” Unverified. I emailed a Meditech press contact but haven’t heard back. Pappalardo co-founded the company in 1968 after he created the MUMPS programming language, and arguably the health IT industry, while at Massachusetts General Hospital as a graduate student.

Clinical trials intelligence platform vendor Lokavant raises $21 million in funding. Participating in the round was Roivant Health, which incubated the company as one of its biotech “vants” that includes data integration company Datavant.

CereCore expands its health IT services to the United Kingdom.

Dominican University New York launches an HHS-funded online public health informatics certificate program for those with a bachelor’s degree, offering a 20% discount of the program’s $11,400 cost for those who enroll by January 10.

A new KLAS report finds that half of the small number of interviewed vendors have migrated their go-forward solutions to the cloud, most commonly choosing Amazon Web Services but with Microsoft Azure gaining traction. The most-reported benefit of cloud is agility (fast scalability, automated provisioning, and automated procurement). Most-mentioned obstacles are support gaps and cost management, with cost models being the top issue that vendors want cloud providers to address. 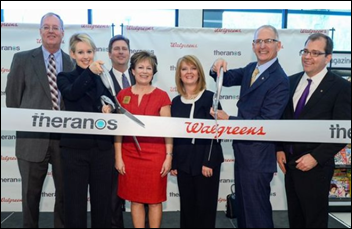 Former Theranos COO Sunny Balwani is sentenced to 13 years in prison after being found guilty of 12 fraud charges. He receives a similar sentence to his former boss and lover Elizabeth Holmes, who had asked to be tried separately claiming that Balwani had emotionally and sexually abused her during their long relationship. Key evidence in both trials was the rollout of Theranos lab stations in Walgreens, which spent $140 million in partnership costs only to find that the startup was using old technology instead of its own to perform tests.

HHS defers enforcement of the No Surprises Act requirement that providers give uninsured and self-pay patients a Good Faith Estimate starting on January 1. HHS says that providers and facilities need to adopt standard API for exchange GFE data and that HL7 FHIR may be used for that purpose.

Beth Israel Lahey Health will pay $1.9 million to settle federal allegations that it failed to maintain accurate records of control substance use, following a 2018 incident in which a pharmacy technician stole 18,000 doses of controlled substances by removing them from automated dispensing machines indicating that they had expired without returning them to the central pharmacy. Meanwhile, Pikeville Medical Center (KY) will pay a $4.4 million civil penalty for diversion of 60,000 doses of narcotics from its Pyxis MedStations by a pharmacy technician. 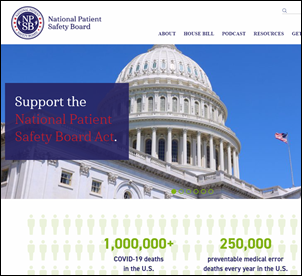 A House bill would create an independent federal patient safety agency that would be modeled after the National Transportation Safety Board and Commercial Aviation Safety Team in using a data-driven, scalable approach to preventing and reducing patient safety events.

A Tennessee urgent care center that is owned by publicly traded Healthcare Solutions Management Group remains closed since November 16 following employee complaints that they haven’t been paid since October 1. They say they can’t access the EHR since the corporate office hasn’t paid that bill and that electricity and water have been shut off several times due to non-payment. HSMD shares are down 88% from their 12-month high, valuing the company at $221 million. The company was formed from a merger with a shell company that previously ran a South Dakota fertilizer company that went into receivership, stating as its goal to become “an advanced, national healthcare system.” It has has signed deals with a developer to open ambulatory surgery centers and urgent care centers that will cost at nearly $4 billion. Board chair and interim CEO/CFO Justin Smith is a former stockbroker.