A Washington federal judge clears the way for UnitedHealth Group to acquire Change Healthcare, rejecting a Department of Justice lawsuit that attempted to block the deal. DOJ had argued that the acquisition would give UnitedHealth’s insurance business access to the claims data of competing payers, which would increase healthcare costs.

The acquisition price is $7.8 billion versus the $13 billion that was reported when the acquisition was first announced in January 2021.

The approval requires Change Healthcare to divest its ClaimsXten claims payment and editing software business to TPG Capital for $2.2 billion.

UnitedHealth will merge Change with its Optum Insight analytics and consulting business.

From Bonedigger: “Re: executive coaching. What advice do you have to make that a career?” My advice would be to choose something else, at least based on my experience with a few health IT folks who tried the executive coaching biz and failed quickly. Senior-level people may overestimate the value of their experience in unrelated work such as consulting, teaching, and coaching, but many organizations prey on their vanity by selling them coaching education and certifications. They still have to find customers (which is the hardest part, like in all businesses), develop the right chemistry, and do good enough work to be retained. The fact that few of them hired coaches for themselves isn’t much of an endorsement.

A memory of a long-ago health IT executive sent me back to Vince Ciotii’s remarkable HIS-tory series, which turned into several hours of “where are they now” Google searches of the folks he mentions in it. I interviewed Vince for the last time in September 2019 and asked him what his epitaph would say, and he replied that the series was his proudest work in 50 years as a health IT executive. Vince’s own final chapter was written upon his death in September 2021.

September 22 (Thursday) 1 ET. “ICD-10-CM 2023 Updates and Regulatory Readiness.” Sponsor: Intelligent Medical Objects. Presenters: June Bronnert, MSHI, RHIA, marketing director, IMO; Julie Glasgow, MD, marketing manager, IMO. The yearly update to ICD-10-CM is almost here. Prepare your organization for a smooth transition, and avoid any negative impacts to your bottom line, with an in-depth look at the upcoming changes. Listen to IMO’s top coding professionals and thought leaders discuss the 2023 ICD-10-CM coding changes. This webinar will review additions, deletions, and other revisions to the ICD-10-CM code set and how to make sure you get properly reimbursed.

Search firm investor Starfish Partners acquires Direct Recruiters, which specializes in staffing solutions for a variety of industries including healthcare IT and life sciences.

Online prescription startup Peak stops offering its ketamine-based psychedelic therapy for drug-resistant depression and anxiety to new patients, and will cease operations at the end of November. 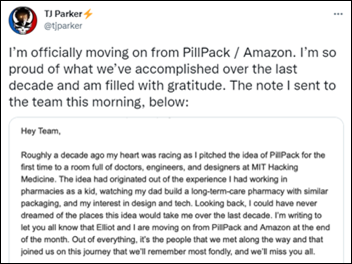 PillPack founders TJ Parker and Elliott Cohen announce that they are leaving Amazon, which acquired the online pharmacy in 2018 for $753 million with little impact since.

McKesson will acquire Rx Savings Solutions, which offers an app that recommends cost-saving prescription changes to members, for  up to $875 million in cash. Founder and CEO Michael Rea, PharmD started the company in 2009 after working as a pharmacist for Walgreens and OptumRx. 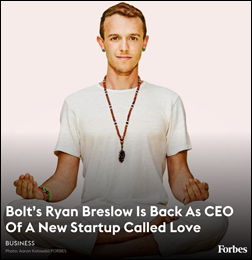 The 28-year-old founder of digital shopping cart vendor Bold – who quit the CEO job in January 2022 days after a fundraising round that valued the company at $11 billion – will become founder and CEO of Love, a Kickstarter-like crowdsourcing and clinical studies platform for homeopathic products. The company will sell digital tokens, which allows investors to vote on which studies to fund. Ryan Breslow – who avoids meat, gluten, caffeine, alcohol, supplements, and after-dark lights and electronic screens – says, “I think my superpower is that I’ve never done health before.”

Johns Hopkins Medicine’s Office of Telemedicine announces that it has conducted 1.5 million telemedicine visits with 420,000 patients since March 2020. The office plans to expand emote patient monitoring capabilities to include ambulatory and complex care and the availability of virtual consults between Johns Hopkins facilities.

Epic implementations in Denmark and Finland are “still troubled” years after go-live, according to authors of an article in the International Journal of Medical Informatics who say that usability has not been optimized, clinical time to perform tasks has increased, and clinician dissatisfaction is at 32%. The authors noted these issues, which are common in large implementations: 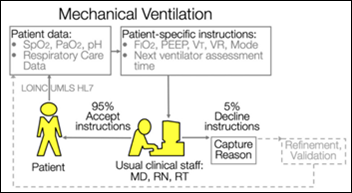 A large group of expert authors proposes to reduce deviations in best-practices patient care by using EActions, which are validated expert systems that are designed to manage a specific clinical task or condition by considering existing patient information to the point that no clinician review is required. The authors distinguish between using such closed-loop technology to make evidence-based treatment decisions – which is possible once a diagnosis has been made – instead of for generating a diagnosis, for which AI is not sufficiently mature. Rules-based treatment for acute respiratory distress syndrome is replicable because if-then rules can adjust ventilator settings and order labs just as clinicians would do, while treating heart failure is not replicable (and thus not suitable as an EAction) because the logic is more complex than simply matching if-then rules to existing data points. The authors predict that implementation of EActions will reduce clinician burden and EHR data noise, allowing comparative effectiveness clinical research questions to be addressed by learning healthcare systems as a by-product of delivering evidence-based care. 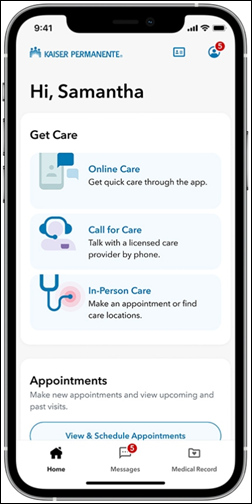 Fast Company names Kaiser Permanente as its 2022 Design Company of the Year for its app redesign, which KP says was associated with an 80% increase in online appointment booking, a doubling of website visits, an increase of digital experience satisfaction from 86% to 92%, and an 84% digital registration rate of members. KP says it is piloting a feature in which the app will offer location-based notification of available services to campus visitors.

Anonymous US Army recruiters complain that the DoD’s Cerner system, which was supposed to speed up the time required to get new recruits processed and in uniform, has instead lengthened the timelines to the point that parents are complaining and recruits are changing their minds about enlisting. The recruiters say new policies and capabilities force them to wait to receive medical records relating to Cerner-flagged histories from providers, which can take weeks. Army officials say that the problem isn’t Cerner, it’s that recruits are often taking antidepressants and ADHD drugs and thus require a heath review that may get them disqualified for service. Anonymous online commenters complain that it was easier in the good old days because recruits could simply lie or plead ignorance about their medical histories.

A lead story in the New York Times says that the lack of public health data limits US response to outbreaks, observing that state and local health departments remain stuck in a world of fax machines, manual data entry, and phone calls. CDC’s attempts to quantify the spread of the Omicron variant of COVID-19 required it to ask Kaiser Permanente to analyze its own patient data. The lack of data has limited the government’s ability to make decisions about boosters and to understand breakthrough cases. The federal government is requiring hospitals to show progress toward automating CDC case reports as triggered by EHR diagnoses, but only 15% hospitals have accomplished that.

A South Dakota paper profiles Sanford Health’s plans for its recently announced $350 million Virtual Care Center and the impact it will have on local and regional patients, as well as nearby health systems: “We would like to be a partner in that,” says Horizon Healthcare CIO Scott Weatherill … We’re definitely drinking the Kool Aid on this, and we fall back on telemedicine readily to continue to provide care, keep our clinics open, and offer additional services to our patients.”

Cooper University Health Care’s MD Anderson affiliate will get a new $2 billion building that will add 100 beds to its Camden, NJ campus.

A Surescripts analysis finds that prescription pick-up rates increased by 3.2% when prescribers used the company’s Real-Time Prescription Benefit, which also saved an average of $38 per prescription. 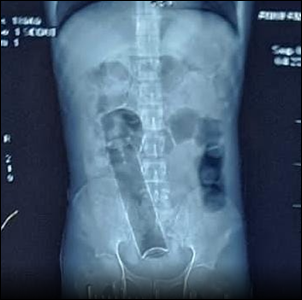 Paging Dr. Weird News Andy: a man in India is hospitalized for three weeks as doctors remove a 7.5-inch deodorant can from his colon, whose presence he declined to explain.

ChartSpan recently released new clinical claims data on the effectiveness of Chronic Care Management programs. If you are looking for a partner in high-quality value-based care programs that actually deliver results, contact us today.