I spent most of last week at the Epic Users Group Meeting and I’m finally recovering. Although I’ve been to the Epic campus on other occasions, this was my first UGM. It was an outstanding experience.

This year’s theme was “Midnight at the Museum.” I can only imagine the amount of work that went into putting it on. Although most vendor user group meetings that I’ve attended have a theme, this was over the top, with many of the Epic staff dressed as characters from paintings, movies, museum exhibits, or as historical figures. Although many paid tribute to a movie of a similar theme — such as cave people, a centurion, and security guards — my favorites were those from paintings such as “American Gothic” and “Girl With a Pearl Earring.” 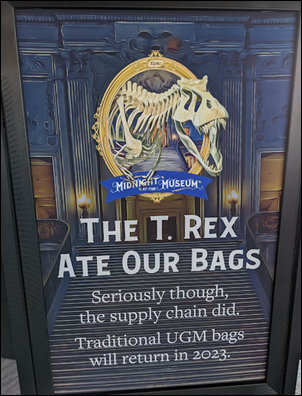 The theme was even used in unexpected ways, including as an explanation for a last-minute substitution of the conference bags they had planned to give out. It’s important to have a sense of humor when the best-laid plans fail to happen, and I give them full credit for running with it.

After checking in and picking up my badge and the substituted tote bag, my colleague and I headed to the traditional Campfire event, which is also a “Taste of Epic” and a chance for the legendary Epic culinary team to shine. The menu included pulled pork sliders, two kinds of stuffed grape leaves, shrimp with tortilla chips, and fried lotus root. I had never tried the latter and was pleasantly surprised. The campfires are real and there were s’mores stations, but I opted to go for the “deconstructed s’more” approach to avoid getting next to the heat since it was already unseasonably warm. The banana pudding did not disappoint. There were plenty of Epic executives out chatting with attendees. 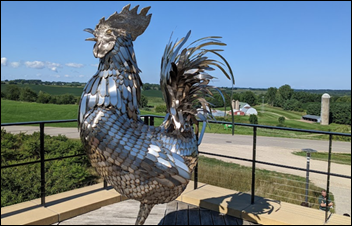 Monday morning I was up bright and early for the trek to campus because I wasn’t sure what traffic would be like. Although they run buses from most of the conference-related hotels, I decided to drive myself due to some post-conference commitments. It was an easy commute. After breakfast, we dove straight in for educational sessions.

I like the Epic format better than other conferences I’ve attended. The majority of the sessions are 40 minutes in length to allow for a 30-minute presentation, 10-minute Q&A, and then a 20-minute passing period. That’s a good length that forces presenters to be concise and focused and allows for attending more presentations versus being in longer ones. Some of the Epic-presented sessions are longer because they are going more in depth with functionality, but they still felt well paced. Audiovisual setups in the presentation rooms were solid, with most rooms having dual projection of the presenters’ slides. 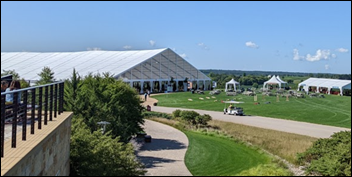 Lunch was my first trip to “the Tent,” which can only be described as ginormous. There was outdoor seating via picnic tables and high-top tables along with lawn games. Inside was a tremendous amount of seating along with various museum-themed exhibits, photo opportunities, costumed staff, and ample buffet lines to keep thousands of attendees moving. I appreciated the nod to sustainability with refillable water bottles and easily accessible filling stations along with recycling bins everywhere that trash bins were located. The short walk from the classrooms to the tent was a nice excuse to get out and enjoy a little fresh air and the beautiful blue skies.

After lunch, I spent a few minutes perusing some local vendors that were set up in one of the common areas. Vendors were sampling cheese, chocolate, and of course mustard since the National Mustard Museum is located just a short hop from campus.

In the afternoon, I stopped by the exhibit hall, which I really enjoyed. Half the space was full of Epic’s “Meet the Experts” booths, where attendees could connect with developers and other key staff for each of the products. I’ve been to other user meetings where development and product teams all but hid from the attendees. It was great to see so many good conversations and plenty of ideas being exchanged. I look forward to seeing some of the ideas I heard discussed make their way into the software.

The other thing that’s different about the exhibit hall is the vendor space. Each vendor has the same size booth and they are relatively uniform. It’s more about substance than glitz, and the smaller format was conducive to conversations. I had a good conversation with IMO (Intelligent Medical Objects) and enjoyed their customized M&M giveaway as an afternoon pick-me-up. As always, the team from Healthwise was friendly and engaging and I enjoyed learning about the volunteer service that one of their reps does in their free time.

Tuesday morning contained the executive address, which was definitely something to behold. Thousands of clients pack the Deep Space auditorium, and many organizations bring decorated umbrellas, balloons, and signs to allow co-workers to find each other to sit together. All of the presenters were costumed in a way that tied to their presentations, with several teams re-creating famous paintings. Part of the presentation involves introductions of all the new clients, and Epic selects a song for each that ties to their name or location.

I wasn’t surprised to see some of my former consulting clients joining the Epic community and I’m certainly looking forward to collaborating with them on a new adventure. No matter where I’ve worked, the informatics community has been full of people who are willing to share best practices and work together to improve care for our patients and communities. 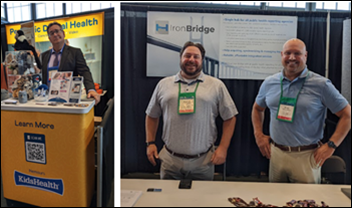 Dr. Jayne’s “Best in Show” vendor award goes to Nemours KidsHealth, which always has cute giveaways. This year they had mummy-shaped chocolates to match the museum theme. I mentioned their HIMSS giveaway of insulated grocery totes and their rep offered to send one to my teammate, which was sweet. The rep was hilarious and definitely held our attention. The Nemours booth was next to Iron Bridge, whose reps were also engaging and funny. The two of them were doing a little riffing off of each other along with the Nemours rep, which was fun to watch. I’ve staffed the booth at conferences in a past life and it can be exhausting, so kudos to these three for keeping it fun. They were still at the same energy level later in the week, which was impressive. 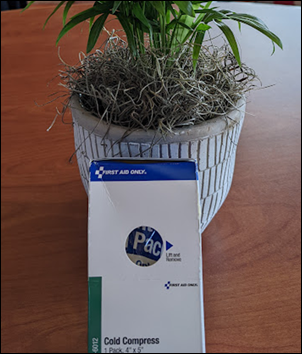 Kudos also to the Epic customer service desk, which happily produced an ice pack for my co-worker’s aching foot. She had injured it prior to the event and soldiered through the week, although she did take advantage of a cow-print golf cart to get to her car at the end of a particularly long day. I know I walked more than 19 miles and talked with what seemed like a thousand different clinical informatics professionals while learning dozens of things I want to take home and implement. I have numerous presentations to review since there were often multiple interesting sessions running at the same time. Our team did its best to divide and conquer, so we still have to put our notes together and share all the thoughts and ideas.

When I’ve written about visiting Epic in the past, readers comment about the cost of the campus. However, in talking with a couple of friends who work in the marketing and trade show space, being able to host your major events on your own property is a smart play. They’re not paying exorbitant convention center fees year after year, but rather are able to invest those expenditures in their own infrastructure. They’re not flying staff across the country, and their in-house culinary team delivered the best conference food I’ve ever encountered, probably at a fraction of the cost that vendors pay for hotel and convention catering. They’re not paying for big-name entertainment or keynote speakers-for-hire. Everything about the event just screams “good clean fun, and you’ll learn something, too.”

What’s the best or worst vendor conference you’ve attended, and why? Leave a comment or email me.