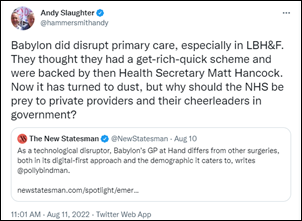 Babylon had offered an AI-based chatbot for triaging patients and a telehealth service.

The company will focus on the US market, where the for-profit healthcare system generates more potential funding.

BBLN shares are down more than 90% since the company went public in a SPAC merger in October 2021.

From Long Island IT: “Re: Northwell. Word in metro New York is that it is talking to Epic now that its CIO, who was tied tightly to Allscripts, is gone and the product set has been sold to Harris.” Unverified. Northwell and Allscripts announced in October 2019 that they would co-develop a next-generation EHR (which never happened) and Northwell extended its Allscripts contracts through 2027. 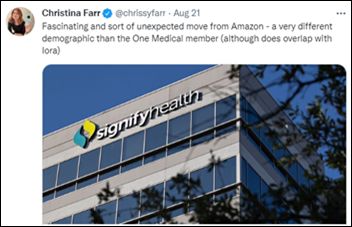 Shares of Signify Health jump on the news that Amazon is reportedly interested in acquiring the home healthcare company, joining CVS Health and UnitedHealth. Final bids for Signify, which could achieve an $8 billion valuation, are due around Labor Day. UnitedHealth’s bid of $30 a share has made it the frontrunner thus far, followed by Amazon, which acquired membership-based primary care company One Medical last month for nearly $4 billion. 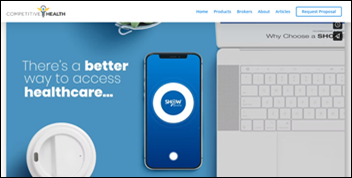 Shares of Zoom took a beating on Tuesday as the company reported mixed quarterly results and lowered its forecast after enterprise sales failed to offset the loss of consumer users. A huge growth in Microsoft Teams users isn’t helping. ZM shares peaked in October 2020 at $559. They are now at $81, having lost 75% of their value in the past 12 months.

The Sequoia Project selects HITRUST as the certifying body for organizations looking to prove compliance with TEFCA security requirements for designation as Qualified Health Information Networks.

The National Cancer Institute awards a grant to Memorial Sloan Kettering Cancer Center to publish best practices for telehealth-enabled cancer care, which will include a study of its MSK@Home program for breast and prostate cancer.

Methodist McKinney Hospital (TX) refuses to pay hackers to retrieve 360 gigabytes of data that was stolen in a recent ransomware attack, which also affected two Methodist surgery centers. The attack occurred between May and July. The hackers have threatened to sell the data on the dark web.

In France, ransomware hackers demand $10 million to restore the systems of 1,000-bed CHSF Hospital Centre, which is sending patients to other hospitals. 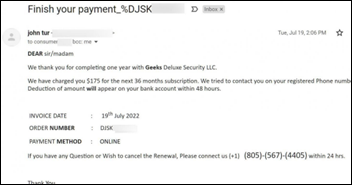 The federal government warns hospitals about voice phishing attacks, in which hackers use telephone calls to convince computer users to install malware. The targeted user receives an email indicating that a subscription that they never signed up for is ending or from what is claimed to be a government entity or technology company, with instructions to call a provided telephone number for more information. 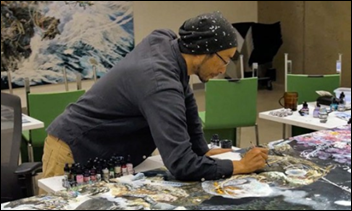 The Verona paper profiles Epic’s artist-in-residence Manabu Ikeda, whose on-campus studio is open for visitors each Monday, Wednesday, and Friday from 2:30 to 3:30 p.m. 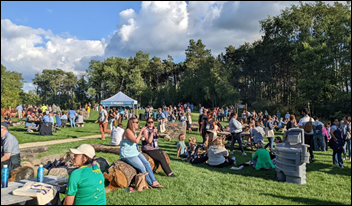 A reader sent this shot of the famous opening campfire of Epic UGM. They offered kudos to the Verona fire department for managing the actual campfires. Meanwhile, I’ve read quite a few horror stories about would-be attendees who are sitting home because the airlines couldn’t figure out how to get them to Verona.

I had a photo of Judy’s keynote at Epic UGM inserted here that I should have noticed (as a couple of readers did who told me) that it was actually from last year’s conference, when the hall seemed emptier with distancing in place. That’s what I get for just searching Twitter for “EpicUGM” and forgetting that I would get old results since I almost never do a Twitter hashtag search. Anyway, Deep Space was apparently packed this week with 11,000 people in the audience. Thanks for the folks who let me know I goofed, and thanks in advance to whomever sends me a photo from this year’s session.