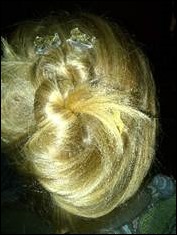 Some days are more challenging than others when it comes to finding healthcare IT topics worthy of blogging about, but this week brought plenty of interesting and/or entertaining content to my door. In the category of “hospitals behaving badly,” we have Nebraska’s Bryan, which recently updated its dress code policy. The purpose of the policy change was to remove restrictions on hair colors, but it was delivered with additional commentary regarding “messy buns,” including pictures of rogue hairstyles. Social media is now alive with the hashtag #showmeyourbuns along with plenty of comments about hospitals worrying about the wrong things while they’re struggling to retain staff members. I share my own messy bun pic in solidarity. And yes, those are cocktail picks holding it together.

Also on my list is HLTH, otherwise known as spammiest conference ever. I thought HIMSS was bad with the volume of email it generates, but since I registered for HLTH, it feels like I have something from them every day. Do I really care who the first 200 sponsors to register are, or how great HLTH thinks its hosted buyer program is? Why is every other email focused on topics related to women? What about other groups that are inequitably served by our healthcare delivery systems, such as minorities, children, or the elderly? To be honest, it feels like pandering, and I’ve started keeping track. I haven’t attended previously, but I’m already tired of the conference hyping itself. You already have my money (and a fair amount of it, at that), so dial it down, already.

CMS is looking for public input on improving Medicare Advantage programs. The organization wants to understand how programs are working for Medicare beneficiaries as well as to understand whether the programs are improving outcomes and decreasing costs. For those not familiar with the programs, Medicare Advantage is also sometimes referred to as “Medicare Part C” and involves contracting with private insurance providers that typically offer not only the traditional Medicare benefits, but also coverage such as vision or dental. Most of them also offer prescription drug coverage (Medicare Part D). In general, they function similar to HMO programs with narrow networks in an effort to better control costs. Comments are encouraged from insurance plans, providers, beneficiaries, patient advocates, states, employers, unions, and others who are stakeholders.

I ran across several articles about telehealth services for mental health, and nearly all of them mentioned the shortage of behavioral health therapists, counselors, social workers, and case managers. One article had a profound headline: “Want to Keep People Working in Mental Health? Pay Them More $$, Experts Say.” One expert cited in the piece stated it would take a $13 increase in hourly wages to keep people from leaving the field. She notes the challenges of the new 988 national suicide prevention hotline in that states have to figure out how to fund it. She’s been able to hire less than half the staff she needs and comments that her crisis center is competing with retail and entertainment employers for available workers who often gravitate to lower-stress, higher-paid positions.

The article notes the wide disparity in access to psychiatrists as an example of the workforce challenges, with New York state having 612 psychiatrists per 100,000 people where Idaho might have one psychiatrist for the same population. Other factors causing workforce challenges include greater awareness of the need for mental health services as well as increased numbers of referrals for care. One of my colleagues recently referred an adolescent to the emergency department for suicidal thoughts, and after 16 hours, the patient still hadn’t received a psychiatric assessment. Ultimately the family left the emergency department without being seen after their primary care physician crowdsourced a same-day psychiatric referral on Facebook. It shouldn’t be that way, but it is, and most people are unaware how poorly our systems are running.

There’s also the matter of escalating abuse and violence against hospital staff. The death of a South Carolina hospital mental health technician was recently ruled a homicide as the technician had been kicked by a patient while staff was trying to restrain her. The staffer, Kevin Robinson, had worked at the facility for 11 years and was only 40 years old. Incidents like this are truly tragic and when young people hear about them, it’s no surprise they’re not gravitating towards jobs in the field.

Last but not least, I spent some time with my parents this week and received a crash course in “patient experience with the local Veterans Affairs health care clinic.” Due to flooding in the area, my dad called the clinic to make sure that the staff was able to make it in. The reply he received was “oh, we’re here, come on in, baby,” which made both him and my mom laugh. The staff at his local clinic is outstanding and the veterans are treated with the care they deserve. The information systems they work with are challenging at times, though, and apparently between his last visit and this one he somehow underwent a religious conversion in the EHR without requesting an update. He was surprised at how much time the staff spent with him going through a variety of screening instruments and taking a detailed history, a much longer duration than the staff at his non-VA primary care office has ever spent with him. I reassured him that it was a good thing they’re doing things like screening for suicide risk and fall risk.

They made sure he had instructions for accessing the patient portal and encouraged him to sign up. He’s proficient with MyChart and other online services, so was surprised that it ended up taking several hours to get signed up for the VA’s portal. Part of that was due to authentication and identify proofing. It was interesting to hear a non-informaticist’s explanation of the process. When he was finally able to access the system, he immediately pulled up his visit note, which was a whopping 49 pages. He thought the view / download capabilities were cool and it was nice to see how a patient perceives something like View / Download / Transmit that most clinical informaticists take for granted. His VA has not yet implemented Cerner, so I’ll have to keep an eye out for when that transition occurs so I can see how it goes from the patient perspective.

What topics in healthcare or healthcare IT caught your eye this week? How do you feel about messy buns in the workplace? Leave a comment or email me.