A VA OIG report concludes that the VA’s use of an “unknown queue” in its Cerner system caused multiple events of patient harm in which orders failed to reach their intended care location. Notes from the report: 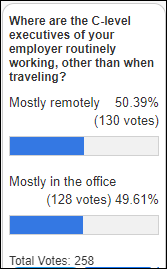 It’s pretty much an even split between C-level executives working from home or from the office. I’m surprised – I thought more of the C-suite would have returned to the office.

New poll to your right or here: How worried are you that your employer will lay you off, demote you, or force you to relocate in the next 12 months? 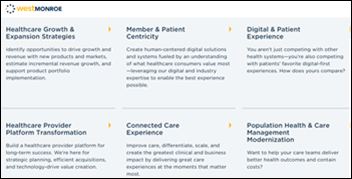 Thanks to new HIStalk Platinum Sponsor West Monroe, which is upgrading from Gold. The digital services firm was born in technology but built for business, partnering with companies in transformative industries to deliver quantifiable financial value. It believes that digital is a mindset—not a project, a team, or a destination—and is  something that companies become, not something they do. That’s why it works as diverse, multidisciplinary teams that blend management consulting, digital design, and product engineering to move companies from traditional ways of working to digital operating models and create experiences that transcend the digital and physical worlds. Thanks to West Monroe for supporting HIStalk.

A fascinating Brookings report looks at Medicare Advantage insurance market, which is good timing since the eye-popping paper valuations of some tech-focused players are being shredded in a more scrutinizing stock market:

So many lessons to be learned here. A company that runs a video game operator in which players can earn cryptocurrency by battling Pokemon-like characters loses $620 million in crypto when one of its engineers falls for a fake job offer on LinkedIn. North Korea-based hackers posed as job recruiters on LinkedIn, got a bite from an engineer at game developer Sky Mavis, took the engineer through several rounds of interviews, and then sent him a generous offer letter in the form of a PDF that was loaded with spyware that gave the hackers access to the company’s blockchain network. 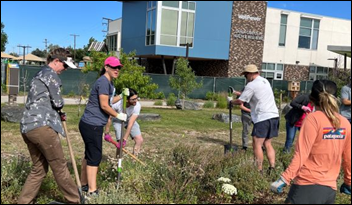