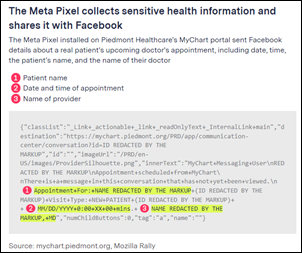 An investigative article finds that the websites of 33 of Newsweek’s top 100 US hospitals send Facebook the IP address of people who schedule an appointment online. The Meta Pixel tracker also sends Facebook the doctor’s name and the search term that the user entered to find them.

The hospitals may have violated HIPAA in sharing personally identifiable health information with third parties without the consent of patients.

From Cedar: “Re: pre-Oracle attempts to develop a national EHR. I recall one entrepreneur in the 2000s who had no healthcare experience who announced he was developing a national EHR. I believe it was Jim Clark of Netscape. Are you aware of any other famous Silicon Valley heads who made a big splash and then went nowhere?” Jim Clark’s Healtheon was certainly all over healthcare, trading on his success with Netscape to eventually merge with WebMD. Intel co-founder Andy Grove also hatched grand healthcare technology plans in the mid-aughts that went nowhere. Google and Microsoft had their own arrogance-fueled failures with personal health records. Sun Microsystems made some national noise in the mid-2000s, then sold out to Oracle in 2010. IBM had a bunch of now-forgotten projects. I’ll invite readers to help me recall other big tech companies that showed misplaced confidence in planning to show us healthcare folks how it’s done before slinking away shortly thereafter with the newfound knowledge that you can’t fix a dysfunctional, profit-obsessed healthcare system with technology.

The Washington Post calls out Phreesia for using the patient information it collects from its patient check-in app collects to target drug company ads.

A Kaiser Health News investigation finds that 41% of US adults are saddled with healthcare-related debt, much of it hidden in the form of credit card balances, family loans, or provider payment plans. An expert says that debt is a main product of a health system that is “almost perfectly designed to create debt.” One in seven people who have medical debt say they can’t receive further care because of their unpaid bills. The authors note that the Affordable Care Act caps out-pocket costs, but few Americans can afford the $8,700 annual maximum and high-deductible plans require paying thousands of dollars before coverage even begins.