Half a dozen people sent me this article about Teladoc’s stock woes following recent statements on its outlook. Based on the comments of company leaders, it seems their customer acquisition costs are higher than anticipated. They also cited lengthy sales cycles as a barrier to growth.

Having been on both the health system side and the vendor side of the process, everyone underestimates the length of the sales cycle. My former hospital employer locked in budgets in July of the preceding year, and if you wanted to buy anything that wasn’t previously budgeted, you had to figure out how to fund it from your allocated bucket. Even if you were replacing a system with something newer and more efficient, you better not cross the red line with implementation or consulting fees. This ultimately led to a glacial experience for vendors trying to bring new solutions to the organization.

There have been some interesting articles in the telehealth literature of late. One looked at rates of antibiotic prescriptions for acute respiratory infections and compared performance by hospital-employed physicians to that of third-party contractors. There was a higher rate of antibiotic prescriptions by the contractors. Although the conclusions have received a lot of publicity, I think the results demonstrate that additional analysis is needed. The study looked at telehealth visits for health system employees and dependents between March 2018 and July 2019. The study was controlled for patient age, day of the week, and overnight visits. It only looked at 257 telemedicine encounters for acute respiratory infections.

In my experience as a telehealth provider and CMIO, the study didn’t look at some variables that can influence prescribing patterns. Number of years post-training can indicate whether the physician’s formative years occurred in the “less is better” era of antibiotics. There have been a lot of semi-retired physicians in my telehealth groups who might not be as close to current evidence as we’d like. Importance of patient satisfaction scores is another factor, and I’ve seen plenty of prescriptions issued in both the telehealth and in-person arenas by physicians who didn’t feel empowered to say no because of the potential impact on patient satisfaction scores. Method of compensation can also be an influence when physicians are paid on volume – it takes more time to explain why you’re saying no, which means lower wages for those providers versus those who are being paid a shift rate or who are compensated using other variables.

Last, it didn’t look at the presence or absence of quality metrics and reporting. In my health system-employed jobs, I’ve received a monthly quarterly metrics package that directly impacted my pocketbook as well as my understanding of my behavior. In my telehealth-only gigs, quality was only addressed robustly by one vendor and two of them didn’t deliver reports packages to me at all. None of the telehealth-only organizations offered bonuses or penalties tied to quality. I suspect that even if you had third-party physicians, if they were practicing on the same EHR and received the same quality measures reporting, compensation structure, etc. that the numbers would be similar.

It would also be interesting to look at data from the post-COVID world, when most organizations made significant leaps forward in their application of telehealth. Systems used in 2018-2019 were fairly rudimentary compared to what we have today, not to mention that physicians’ experience with telehealth visits has grown exponentially. Hopefully someone will do research to look at the impact of the rest of these factors as I suspect there is more to the story than meets the eye.

Telehealth also took a hit in this JAMA Network Open piece looking at follow-up patterns for acute conditions compared to chronic conditions. For acute problems, patients who had an initial telehealth encounter were more likely to have a follow-up encounter, including emergency department encounters and inpatient admissions. For patients with chronic problems, patients who had an initial telehealth encounter were less likely to have a follow up encounter. The authors note that there are some potential problems with uncontrolled confounding bias. They provided the example of the bias in deciding whether to deliver an encounter via telehealth or in person. They also noted the need to look at other clinically important factors, such as frequency of laboratory testing and prescribing or adjusting of medications. The study was limited to commercially insured patients and didn’t include subjects with Medicare, Medicaid, or no insurance. We know those patients often have significantly different care experiences that would be worth examining.

Thank you to all who reached out regarding my recent post on EHR downtime and medical errors. Many of you had gut-wrenching EHR downtime stories to share. I appreciate the stories but am saddened that we are all part of this club we never wanted to be a part of. Several readers noted the need to have ongoing downtime education – not just when people join the company or at the same time of year that everyone has to churn through annual HIPAA, Compliance, and Fraud / Waste / Abuse training. Others suggested practice downtime events to make sure people know when and how to declare a downtime, as well as where materials and supplies are located. Both strategies would certainly help, so thanks for bringing them front and center. 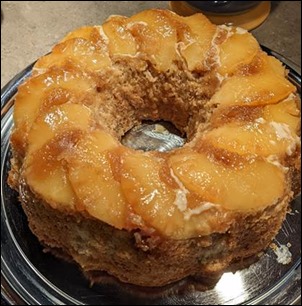 I’ve been having difficulty sleeping since the recent time change, which was confounded by multiple trips from one coast to another. I’m not into pharmaceuticals and even some popular supplements like melatonin have fallen out of favor. It’s been a rough couple of weeks, so I’m back in pastry therapy. For your consideration, I present a new take on the classic pineapple upside-down cake. With the right amount of brown sugar and butter, you really can’t go wrong.

What’s your favorite stress-relieving pastime? Leave a comment or email me.