Today was the last one for the exhibit hall. I was pleasantly surprised by how many attendees stuck it out through the afternoon. Usually by noon on Thursday, the hall is a ghost town filled with bored booth reps, some of whom are trying to pack up their goods without looking like they’re packing up. This year, people were still combing the halls and reps were largely engaged, which is a testament to how desperate people were to return to in-person conferences.

Booth swag was being freely given nearly everywhere except for Salesforce, which was insistent on requiring participation in their quest around the booth before they would grant anyone a pair of socks.

Intermountain Healthcare had several different styles of shirts they were clearing out. I was happy to score one that says “Talk Data to Me.” Their reps were friendly and didn’t act annoyed even when there was a feeding frenzy of attendees coming at them. 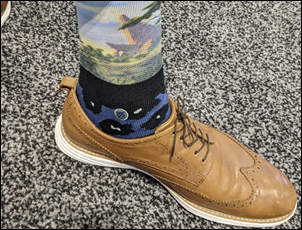 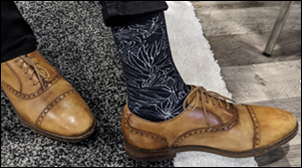 Intelligent Medical Objects again brought their A-game to the footwear contest, winning the day with these Lion King-themed socks featuring Pride Rock along and also with this eye-catching Oxford/sock combination. 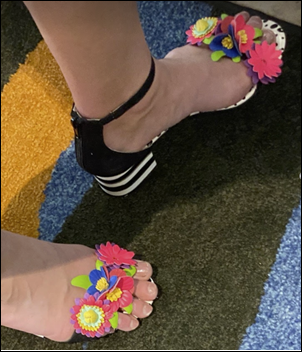 The best sandals of the show were submitted by a reader who spotted them at the opening reception and sent along a photo. 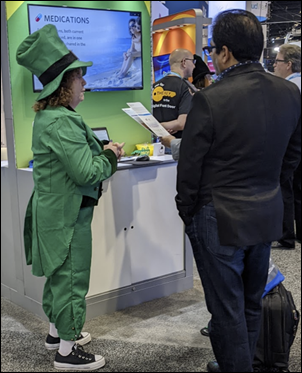 Get Real Health had a leprechaun at their booth in honor of St. Patrick’s Day. 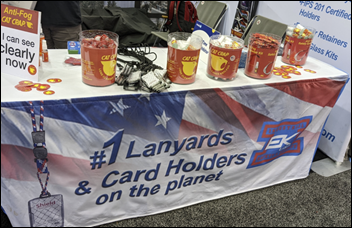 Mr. H mentioned the EK USA booth earlier this week and featured their Cat Crap lens defogger. I stopped by to check it out and learned that it works not only to mitigate the glasses / mask issue, but also for motorcycle helmet visors, which should come in handy given some of my upcoming activities. The company also manufactures badge holders and reels designed for high-risk environments such as the US military, nuclear power providers, manufacturing, and healthcare. Organizations are at risk if employees lose their ID badges, especially if they allow proximity access to sensitive systems. Replacing lost badges is both a materials and personnel cost, not to mention lost time and productivity by the employee who is temporarily without a badge. I didn’t know there was such a thing as a certified card holder, but I do now. This is their first time at HIMSS, but clearly not their first trade show – the booth reps were some of the most engaging I encountered this week and I brought several people by to visit them. The company has been around for decades, and I hope they do well in the healthcare space.

I must have walked by the Welt booth a dozen times this week but didn’t notice it since it was on the main aisle, which was generally busy Tuesday and Wednesday. They have a smart belt that can track gait and look for signs of deterioration that can indicate worsening of status for patients with movement disorders. They are a spinoff of Samsung. I’m looking forward to learning more about them. 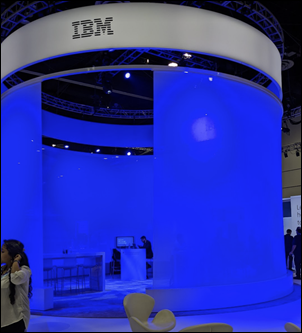 IBM’s color-changing booth was pretty cool, although when it was flooded with white light, it looked a bit bland. My booth crawl companion and I think they should project movies on it next year.

I’m glad I stayed till Thursday, but after lunch I reached the point where I was done and headed to the airport early. My airline is handling so many bags due to spring break that they had to split how they were accepting checked bags and sent passengers to a secondary bag drop to try to maximize capacity. The airport was fairly chill except for the man in front of me who refused to remove his Air Pods for TSA. When they forced the issue and asked him to place them in a bin to go on the conveyor (he wanted to just put them on top of his loose driver’s license so they wouldn’t touch the belt), he started demanding “something to sanitize this bin with” and they pulled him aside. Sounds like someone needs to start carrying some cleaning wipes or perhaps a bag in which he could have put his loose items. I wonder how long he was detained with whatever secondary screening they decided he needed.

That’s a wrap for HIMSS22. Thanks for going on this journey with me, and I’ll see you next year in Chicago!