The San Francisco-based company offered a tele-ophthalmology triage app under the name DigiInsight Technologies until 2018, when it signed a deal to commercialize the patient dataset of the American Academy of Ophthalmologists and pivoted into life sciences data.

From Veteran of the Psychic Wars: “Re: HIMSS show dropouts. Will you be reporting them again this year?” I will when I hear about them, which really happened only during HIMSS20, when a company that decided not to attend was noteworthy enough to warrant issuing a press release or tweet. It isn’t in the best interest of HIMSS to announce pullouts, so the only surefire way to track dropouts would be if HIMSS religiously updates their conference exhibitor floor plan, in which case (a) it could be screen-scraped with the “not really exhibiting” vendors  who haven’t booked a 10×10 booth or larger could be excluded; and (b) the result could be exported to a database and compared with previous versions. The exhibitor count is at 640, up from 603 a week ago. Let me know if your company had signed up to exhibit but has decided against it. Still, I’ll offer the same advice as I did in 2020 and 2021 – exhibit or not based on your own comfort level, not on what everybody else is doing.

About 20% of poll respondents have tested positive for COVID-19 at some point, with about 4% of those requiring hospitalization and the others evenly split between no impact or having some degree of symptoms.

New poll to your right or here: Which social networks are you using much less now than two years ago? I admit that I don’t use most of them and I’m weaning myself off Facebook because I feel worse after looking at it instead of better. I probably waste more time in the rabbit hole of YouTube than the others.

HIMSS isn’t the only conference trying to figure out how to implement safety protocols in Florida. Less than 50 days from its start in Miami Beach, the inaugural ViVE conference — put on by CHIME and HLTH March 6-9 — hasn’t announced COVID protocols, saying only that it hasn’t decided about requiring vaccination and hopes that “masking and social distancing can become personal decisions.” The conference expects 3,500 attendees, 300 sponsors, and 250 speakers. 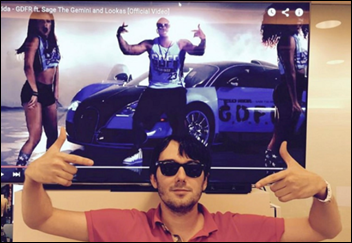 A federal court orders former drug company CEO Martin Shkreli to repay $65 million and bans him from participating in the drug industry for life for his role at Vyera Pharmaceuticals, formerly known as Turing Pharmaceuticals, which acquired the exclusive rights to old toxoplasmosis treatment drug Daraprim and immediately raised its price by 5,000%. The New York attorney general declared him “a pharma bro no more.” He will complete a seven-year federal prison sentence for securities fraud in November. Shkreli’s swaggering, obnoxious personality and declarations that his actions were simply “capitalism at work” got him in trouble for doing pretty much what all drug companies do in monopolizing markets by buying off would-be competitors or burying them in legal challenges – he should have worn a suit, spoken soaringly about human health while quietly stuffing cash in the mattress, and jacked Daraprim’s price up steadily over a few years like insulin manufacturers have learned to do to prevent an immediate uproar for profiting on the backs of desperately ill people. 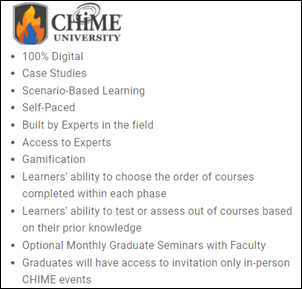 CHIME launches the degree-granting CHIME University for digital health professionals, which will begin classes on January 31 for the 45 credit hour Master of Digital Healthcare and 60 credit hour Doctor of Digital Healthcare degrees. The degrees are self-paced and offered digitally, with a rolling enrollment allowing learners to start at any time. Each degree costs a flat $12,000 with discounts offered to CHIME members, CHIME Foundation members, and CHIME-affiliated organizations. CHIME University, which has not earned accreditation but will seek it, will initially offer its programs to residents of 21 states.

The VA pushes back its second Cerner go-live from March 5 to April 30 at its Columbus, OH facility, which it says has experienced training delays because 200 of its 1,700 employees are absent. 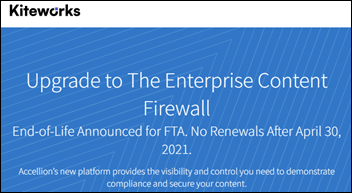 File transfer software vendor Accellion reaches an $8 million settlement for a December 2020 breach that affected 9 million people, 3.5 million of them patients with Centene, Kroger, Trinity Health, and others. Hackers sent extortion emails to at least 100 companies, threatening to publish their sensitive data online. The company says in its settlement proposal that it did not guarantee the security of its software, adding that its license agreement disclaims those guarantees and includes a limitation of liability for breach-related damages. New sales of the company’s 20-year-old File Transfer Appliance software ended in 2016, but customers were allowed to renew their licenses even though the software’s final security update was in February 2019. The company now markets its products under the name Kiteworks.

NPR covers the month-old ransomware downtime of Kronos Private Cloud, which has affected 8 million employees, including those of many health systems. AHA says that hospitals have been hit especially hard with the manual payroll work that is required as they deal with heavy COVID-19 workload. AHA says that hackers are obviously to blame, but it is disappointed with Kronos for a lack of transparency and its failure to protect its systems. The company said Friday that it has restored access for 1,000 customers, putting it ahead of schedule for its target of a complete recovery by January 28. Kronos also says that “a relatively small volume of data” was exfiltrated by the hacker in the December 11 attack and it has notified affected customers.