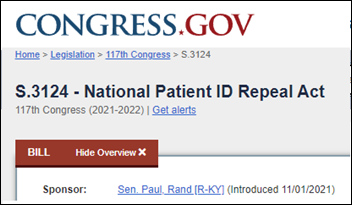 Politico notes that even though the Senate has, for the first time, removed the prohibition of spending HHS money on a national patient identifier for 2022, nothing is guaranteed because of the way HHS appropriations work.

ONC was supposed to create a report describing how such identification would work and the benefits and risk of implementing it. That report is is overdue and is holding up the process.

From IANAL: “Re: Cerner. I suspect the voice assistant statement in Oracles press release was aimed at buyers or holders of Oracle stock. Many see Oracle’s main competitor as Microsoft, which acquired Nuance/Dragon. The press releases of big, boring companies are often aimed at shareholders since shareholders are interested enough to read company press releases and usually need calming after big company decisions. I wouldn’t take it as an indication of Oracle’s actual intentions for Cerner.” Excellent point. Companies often say things in acquisition press releases that don’t match their actual intentions, instead using the limelight opportunity to improve their image with investors. The claim that Oracle will make its little-known voice assistant the primary clinician interface for Millennium may well have been smoke-blowing to make Microsoft’s acquisition of Nuance seem less significant. It seems obvious that the biggest benefit to Oracle is buying a company that in essence resells a lot of its high-margin products (like the Oracle database) and to stave off the company’s move to AWS and force customers onto Oracle’s less-competitive offering. I doubt that the worksheet analysis used by Oracle’s acquisition team contained a lot of columns that predict the acquisition’s positive impact on patients and clinicians, healthcare costs, and outcomes. 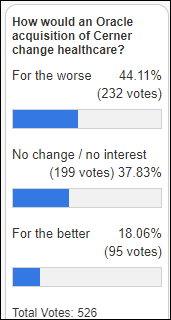 Few poll respondents expect Oracle’s acquisition of Cerner to improve healthcare. Mike thinks a new focus on infrastructure will slow down the rollout of more-important product features, turning Cerner into another McKesson Horizon that will be sold for parts. Multiple commenters say that both companies are focused on sales rather than products, which is tough in healthcare where sales cycles are long and complicated. Khyber Pass makes an eloquent comparison of US healthcare to Afghanistan, where outside powers waltzed unknowingly into the “Graveyard of Empires” and were undone by fractiousness, complexity, and problems that the locals couldn’t solve. IANAL makes several interesting predictions:

New poll to your right or here: Which COVID activities will you practice to a greater degree in the first several months of 2022 compared to mid-2021? I’m trying not to fall victim to the “I’ll get it no matter what I do, so I might as well just live my life” symptom of COVID fatigue, but I’ll at least switch from cloth to KN95 masks in some or all situations. Omicron has changed the dynamic to where all of us probably know someone personally who has had it recently. Post-holiday case numbers will be crazy, although only a small percentage of those will likely result in hospitalization (but a small percentage of a huge number is still a big number of occupied beds that will be unavailable for medical needs of all kinds).

In India, Indian Railways – the government-owned railway system that is the world’s eighth-largest employer with 1.3 million employees —  goes live on the Hospital Management Information System at its 695 hospitals and healthcare units, linked to the patient identifier of employees, family members, and employees.

Mid-Columbia Medical Center (OR) and OHSU Health end most aspects of their longstanding collaboration agreement, which will require MCMC to move away from OHSU’s Epic system.

Dr. Jayne is annoyed that the CES show denied her request for a media pass with a curt “insufficient credentials” response, but the January 5-8 conference might wish they had let her come given high-profile pullouts of dozens of companies from the in-person conference due to COVID-19 concerns – Lenovo, Microsoft, Google, Amazon, Intel, Meta (Facebook), and Omron Healthcare. Several tech reporting sites have decided not to send reporters to Las Vegas for live coverage of the conference, which drew 180,000 attendees the last time it was held in person in January 2020. CES declares that it won’t cancel the in-person show, saying that while 10% of exhibit hall space will now feature chairs and potted plants in being repurposed into impromptu lounges, smaller companies rely on the conference to do business. Some people still expect CES to either give up and cancel the show or try to put good spin (a la HIMSS and RSNA) on drawing 75% fewer attendees, many of whom had already decided to participate virtually or not at all even before emergence of the Omicron variant. According to one tech publisher, “You know something’s different on the Central Hall floor when you see the US Postal Service has really great booth position.”

A researcher says that nursing shortages, accelerated by pandemic-related retirements and reduced nursing school enrollment, will shift health system budgets away from expansion and acquisition of new technology. One travel nurse says the hospital she works at is so short staffed that she is paid more than surgeons, but many travel nurses say the money is only a short-term reason to continue practicing in a high-stress setting where hospitals don’t seem to value their mental health. 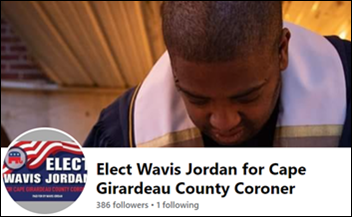 The coroner of an 80,000-resident county in Missouri – who, like many of his national peers, had no medical training or experience before he was elected to the low-paying job — tells a reporter that his office “doesn’t do COVID deaths,” having recorded COVID-19 as a cause of death zero times in 2021. Wavis Jordan, who is also a lay preacher, says families would need to provide proof of a positive test to have it included on the death certificate, which goes against CDC’s recommendation of taking symptoms and medical history into account. Many death certificates feature “garbage codes” such as “heart failure, unspecified” that are inappropriate as an underlying cause of death. A county coroner in Mississippi, where deaths labeled as “heart attacks” doubled in 2020, says family members often refuse to allow COVID-19 on death certificates until they learn that the federal government pays for the funerals of people who die of COVID-19.

HuffPost covers private equity’s heavy acquisition of hospice chains, with the number of PE-owned hospices tripling from 2012 to 2019 in a quest to cash in on dying baby boomers in a lightly regulated industry for which Medicare pays generously. Their formula involves slashing costs and staffing and pushing marketing teams to sign up people who might not actually need hospice services. One hospice company that says it is one of the fastest-growing companies in the US declines to name its owner, even after its private equity owner paid $200 million to buy a British Formula One racing team (racing reporters believe the owner is a low-key Hong Kong billionaire). Profits are high because Medicare pays the same per-day rate regardless of complexity, so an aide who feeds a patient lunch is billed at the same rate as a nurse who runs an IV. The acquired hospice market heavily to assisted living facilities since servicing patients who live under one roof increases efficiency.