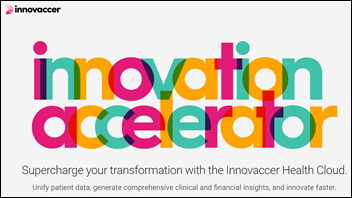 Innovaccer raises $150 million in a Series E funding round that values the company at $3.2 billion.

From Marc: “Re: Scarborough Heath Network. The first client in the world to put Epic DR on AWS. Great collaboration with Deloitte, AWS, and Epic.”

I’m interested in hearing about turnover experience – yours and your employer’s — via this short, anonymous survey, whose results I’ll aggregate in the next few days.

The JP Morgan healthcare conference, which just moved to a virtual-only format because of attendee concerns about COVID-19, will start 55 days before the first-ever ViVE conference and 63 days before HIMSS22. It’s not a great time to be in the conference business, especially when those two upcoming conferences are in Florida, which bans vaccine mandates (such as for workers at the convention center, hotels, and restaurants) and doesn’t allow requiring customers to provide proof of vaccination. HIMSS says it is reviewing its Right of Entry Protocols for HIMSS22 to determine which ones “comply with prevailing local regulations in Florida,” which is basically what ViVE is doing in simply saying that it will let people know later what it will be allowed to require (we’re just 80 days out). Would you be comfortable attending a conference where attendee vaccination cannot be verified under state law? JPM would have required attendees to prove vaccination and to wear masks indoors.

Ophelia, which connects opioid users in 11 states to moonlighting providers who prescribe Suboxone via video visits for $195 per month, raises $50 million in a Series B funding round.

Optum sets the date for completing its $13 billion acquisition of Change Healthcare as April 5, 2022. 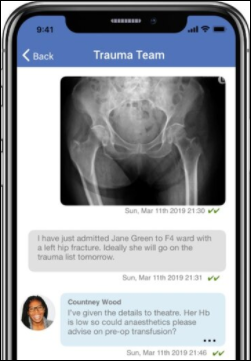 UK-based secure communications platform vendor Hospify will shut down its flagship service on January 31, 2022. The app, which was launched in February 2018, was the first to be approved for general provider and patient use by the NHS Apps Library. The company blames its demise on the government’s early-pandemic waiver of the Data Protection Act, which continues in allowing providers to use non-GDPR compliant consumer messaging apps such as WhatsApp. The company also questions the post-Brexit uncertainties around the UK-EU data agreements. Hospify’s movingly honest and sometimes humorous explanation of its circumstances says that the company will remain in business at it seeks new markets where “data protection is taken more seriously by the relevant governments.”

K Health, which offers “people like me” compiled health insights and telehealth, hires Jennifer Pena, MD (Nurx) to the newly created position of chief medical officer. She previously served as White House physician and spent 10 years as a US Army doctor.

Industry long-timer Thomas “TR” Rush – VP of business development at MedAssist and veteran of a long career at Siemens Healthcare — died unexpectedly last week, two days before the birth of his first grandchild. He was 51.

A study of Arcadia’s de-identified health history of 150 million patients finds that unvaccinated people were six times less likely to report multiple symptoms of long COVID if they were given their first COVID-19 vaccination in the four weeks after becoming infected. Even those who didn’t get the shot until 4-8 weeks after diagnosis were three times less likely to report multiple long COVID symptoms. 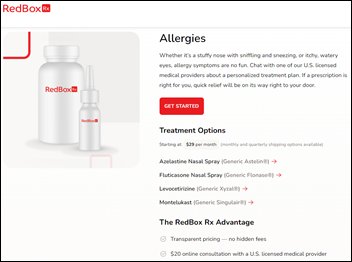 Midwest grocery chain Hy-Vee launches RedBox Rx, a national, low-cost telehealth and online pharmacy service that includes free prescription shipping. The service, which offers telehealth visits for prices ranging from zero to $39, does not accept insurance. It is offered by partner MDBox, the telehealth business of Reliant Immune Diagnostics that also offers testing and monitoring.

Cigna-owned health services vendor Evernorth chooses Omada Health as its preferred vendor for digital chronic care programs for diabetes, hypertension, and prevention. It apparently displaces Livongo, which was acquired in October 2020 for $18.5 billion by Teladoc Health, whose shares dropped on the latest news in valuing the company at $14 billion. TDOC’s market cap has dropped by two-thirds – $28 billion — since February 2021. 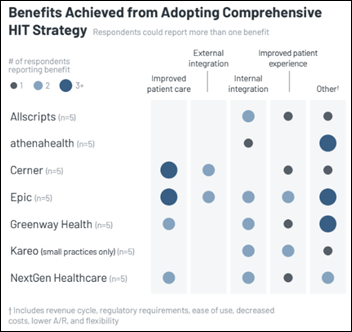 A new KLAS report that covers EHR vendors that offer a wide range of comprehensive solutions for ambulatory practices finds that Epic, NextGen Healthcare, and Cerner earn high user satisfaction with offering technologies that meet most or all of an ambulatory practice’s needs, although the virtual care offerings of those vendors are sometimes passed over in favor of best-of-breed tools. Cerner customers remain concerned about Cerner’s revenue cycle track record and don’t always choose its practice management solution, while all interviewed customers of NextGen Healthcare and Epic report lowered costs and/or increased revenue after implementation.

Two Republication US senators introduce a bipartisan bill that requires the VA secretary to report the cost, performance metrics, and outcomes of its Cerner project quarterly to Congress.

AMA calls for app developers to practice “privacy by design” to gain the trust of physicians who have involvement in patient app use. It notes that many people mistakenly believe that direct-to-consumer health apps are regulated by HIPAA. It also notes that developers who use software development kits from companies such as Facebook, Zoom, and Google may knowingly or unknowingly be exposing user data to third party advertisers and data aggregators, including apps that address addiction and recovery. AMA calls for apps to identify the data they are accessing, using, disclosing, and processing before collecting it and to give users control over how their information is used. AMA also calls for apps to get user approval before their data is used to develop and/or train machines or algorithms and to allow them to opt out.

Among the health systems that have said publicly that they are being affected by the Ultimate Kronos Group ransomware attack are Shannon Medical Center (TX), Ascension, Baptist Health (FL), UF Health (FL), Allegheny Health Network (PA), and Franciscan Missionaries of Our Lady Health System (LA). Some UKG time clocks can store punches locally until their memory is full, but the data can’t be collected since Workforce Central connectivity is unavailable. The company recommends re-posting the previous payroll, then working with UKG to reconcile differences after systems are restored (because it’s always fun to ask overpaid employees to give the extra money back right after Christmas). UKG says the attack has left it unable to access customer environments or to provide historical reports or files.

The president and CEO of Stamford Health (CT) says that virtual health plans “should worry us all” as insurers are using them like 1990s HMO gatekeepers in their virtual-first plans to limit access to physicians, tests, and in-person visits. Kathleen Silard, RN, MS also notes that the virtual health plans often involve third-party companies whose doctors don’t know their patients and whose EHRs make data-sharing harder. She also worries about equity issues due to digital illiteracy and lack of access to computing devices and broadband. She concludes, “I know that technology is a tremendous clinical tool for lowering barriers to care. I hope it becomes a regular site of care for many patients. But don’t confuse virtual care with a virtual health insurance plan. Technology builds walls as easily as it tears them down.”

JP Morgan Chase cancels its in-person 2022 healthcare conference, bowing to pressure to hold the event online instead of in San Francisco January 10-13. The company says it is concerned about COVID-19, which had already resulted in the pullout of vaccine makers Moderna and Amgen, but big-company attendees had already called for the conference to be cancelled due to their safety concerns related to San Francisco crime and homelessness around the conference site. Some experts predict that JPM will resume in a different city in 2023 to skirt San Francisco’s overcharging vendors, but others say those who are buying $1,000 hotel rooms and $200 hourly coffee shop table rental are often conference hangers-on who don’t join the small number of invited attendees inside the Westin St. Francis anyway. 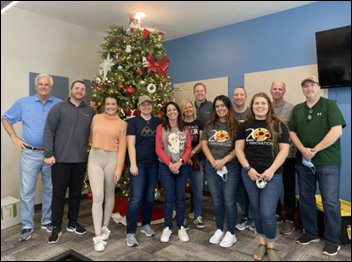