I decided to take full advantage of the HIMSS experience and slept in a little this morning, pretending I was on Pacific time to justify some extra lounging. I’ve asked my household to do some random door-slamming to simulate the hotel experience, but they were fairly quiet and there was no dinging of elevators or rattling of ice machines either. In honor of the “reduced attendee headcount” experience, they allowed me ready access to the coffee rather than having to stand in a queue, and fortunately my morning brew was complimentary with my already-paid room.

My registration experience was confined to having to log into the HIMSS Digital app since I hadn’t used it in 72 hours on my desktop PC. Once again it asked me for a validation code that it said would be delivered to my phone but never was, although it did finally arrive via email. I picked out of a couple of on-demand sessions for my morning education, but I had a bit of a client fire to put out, so I’ll have to make it to those later.

The lunch hour was rounded out with a meeting that was supposed to happen in person in Las Vegas but ended up being via phone since we both elected not to go to HIMSS. I definitely enjoyed being able to meet with her with a sandwich on my desk versus trying to fight to get a restaurant reservation as you usually do at HIMSS.

Finally, the main event arrived, the opening session, titled “The Year That Shook the World,” including Hal Wolf’s opening speech that was followed by the keynote with Patrick Dempsey. The first eight minutes of the session included some banter by the hosts about how great Digital HIMSS is and how many safety precautions they’re taking on the set, as well as some comments about attendee door prizes including a free HIMSS membership and a Starbucks gift card.

To be honest, I was a little tuned out because I don’t do well with silly banter, and the portion of the speech by Hal Wolf felt like a buzzword salad. He covered the rise of telehealth, the need to transform current care models to one focused on value-based care, and the instability of healthcare organizations’ financial positions. I can only hear about the intersection of people, process, and technology so many times, so it was a struggle not to multitask.

HIMSS also pushed its Accelerate platform that I can only describe as a cross between LinkedIn, Facebook, and other social media platforms that HIMSS thinks is “exciting” and “incredible” but most of us think is pretty “meh.” The hosts talked about how excited they were about the platform and how “I felt like it was built just for me.” More inane banter ensued, with attempts to also engage people on social media and intermittent check-ins with their social media wall display that they have on the set.

The “Visionary Keynote” from Patrick Dempsey was an approximately two-minute “tribute” wishing us a good conference and thanking healthcare providers for our service. He’s apparently onsite for a movie in Ireland and gave a salute with his teacup. The presentation segued back to more banter between the hosts and encouragement to “break social media” using the #HIMSS21 hashtag. To be honest, 28 minutes into the presentation, they pretty much lost me. I tried to get into the panel on “Lessons Learned and Forward Strategies for Virtual Care,” but it was basically a summary of what I’ve lived for the last year and a half as well as the projects I’m currently working on. I didn’t get a lot out of it, but felt like if you weren’t knee deep in virtual care, you might have found it more engaging.

Moving into the next segment on “Getting AI Right and Guaranteeing Equity,” I had to cringe when the host couldn’t pronounce John Halamka’s name correctly. I do love Dr. Halamka’s ability to talk about complex topics in a way to make it understandable. He gave a great example why you can’t create an AI model using EKGs in thousands of Scandinavian Lutherans and expect it to work properly in Spain. He likened using the nutrition label on foods to needing a label on our AI algorithms to show the economics, ethnicities, etc. that went into creating the algorithm. Definitely one of the more engaging segments of the afternoon.

I received a couple of vendor emails inviting me to booths at HIMSS21 if I would have been there. Cisco was one of them and also offered a complimentary code for HIMSS Digital, so I would have been pretty aggravated if I paid for it rather than attending as part of my rollover registration from 2020. 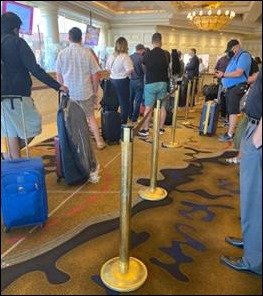 Readers at the live conference have been keeping me posted on lines at check-in, reporting growing lines throughout the day. One hotel had 30 people in line at 10:30 a.m., with only three employees working the front desk. One reader reported elevators with six-plus unrelated people in them and only 50% masking. I can’t help but imagine that the frontline healthcare providers who decided to attend are losing their minds when confronted with those scenarios.

Other boots on the ground reports include that the food at the opening reception was “actually pretty good” but that there were no performers in show girl costumes this time around. I also heard that the subterranean area of the expo center is no more, and that the new exhibit hall layout “redefines social distance” with a 100-plus degree heat and half a day’s worth of steps to get there. Kudos to my intrepid correspondent for braving the melting sun to keep me posted.

I’m still waiting for shoe and fancy mask pictures, so please send them my way!