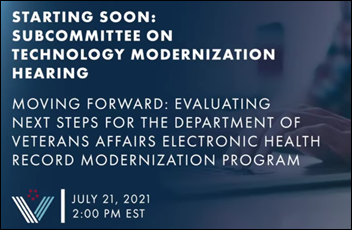 The VA tells the House Veterans Affairs Committee that it won’t bring any more sites live on Cerner for at least six months. From the hearing (in addition to misstating the Eastern time zone as “EST” above):

From Banned Book: “Re: Cerner. Seems like a lot of execs are moving on lately.” Maybe, but Cerner is a huge, publicly traded company with deep talent, and some of those folks have been around long enough to realize that maybe they’ve peaked at Cerner and need to move out to move up. The lackluster company performance over the past few years that led to Brent Shafer’s announced departure and his uncertain replacement is likely accelerating the exodus. I don’t think it’s necessarily a poor reflection on the company or an indication of executive dissent – it’s a hot health IT market out there and well-funded startups need some adults in the room. 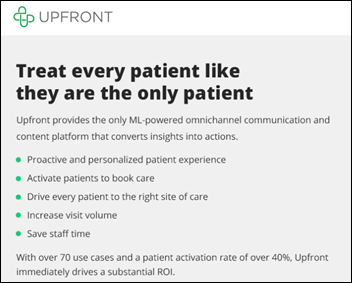 Welcome to new HIStalk Platinum Sponsor Upfront Healthcare. The Chicago-based company navigates patients to the care they need as new digital services, sites of care, and non-traditional competitors reshape the way they expect to interact with their health system. The company delivers superior outcomes through personalization, in which advanced analytics is used to adapt communication channel and content to eliminate barriers to patient engagement. The frictionless experience requires no download or login as it guides patients to the services they need to close care gaps, attend visits, reschedule in a single click, enroll in services, improve medication adherence, follow up after a transition of care, prepare for an episode of care, and schedule open referrals. It provides the contact center and care team with a unified view of patient communications for all modalities (SMS, email, digital voice, etc.) and can be launched from the EHR or CRM with integration using API, HL7, SMART on FHIR, and batch files. Co-founder and CEO Ben Albert, MBA is an industry long-timer who founded what is now Crimson Care Management. Thanks to Upfront Healthcare for supporting HIStalk.

Were you planning to attend HIMSS21 but have changed your plans in the past couple of weeks? Tell me why. The beginning of the end for HIMSS20 was companies – including health systems – that banned travel due to the alarming rise in COVID-19 cases and readers keep asking me if that could happen again.

If you attend HIMSS21 in person instead of watching the virtual version, you’ll miss the virtual-only keynote of “Grey’s Anatomy” star and TV doctor Patrick Dempsey. His credentials are a bit shy of being a real doctor — he dropped out of high school to join the circus, and once he became famous on TV years later, his high school just gave him the diploma he didn’t earn.

Dann Lemerand, who started the HIStalk Fan Club on LinkedIn in mid-2008, says it has 4,000 followers. I can’t make a strong argument for joining since you don’t get anything for doing so, but at least you’ll be rubbing virtual elbows with some pretty high-level industry folks who signed up. I really should review my LinkedIn connections and recommendations for an emotional lift in those moments where I question the wisdom of sitting in an empty room filling an empty screen.

Staff and consulting services vendor Optimum Healthcare IT is acquired by Achieve Partners, which invests in skills development technologies and businesses that can create American jobs. Achieve will expand Optimum’s paid health IT apprenticeship program. 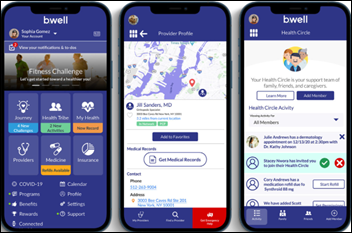 Digital health vendor B.well Connected Health raises $32 million in a Series B funding round, increasing its total to $59 million.

Syntellis Performance Solutions, the former Kaufman Hall software division, names Flint Brenton (Centrify) as CEO. He replaces Kermit Randa, who will leave the company now that it has been taken independent with investments from Thoma Bravo and Madison Dearborn Partners.

Google Cloud offers a private preview of Healthcare Data Engine, which creates real-time views of longitudinal patient records. The company says the product can map 90% of HL7v2 messages to FHIR out of the box.

Document Storage Systems (DSS) launches a commercial division called Juno Health, which will offer an EHR and solutions for e-prescribing and emergency services. 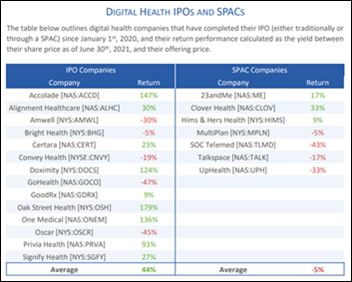 Highlights from the just-issued “Semi-Annual Market Review” of Healthcare Growth Partners, which as usual drew me in to read every word instead of the quick skim I envisioned:

A Georgia law firm files an ONC information blocking complaint against Doctors Hospital of Augusta, Meditech, and Ciox Health, claiming that the patient records the firm requested on behalf of its malpractice client were not provided as an OCR-readable PDF file.

ONC seeks feedback on use of the HIPAA Security Risk Assessment tool.

Rep. Marjorie Taylor Green (R-GA) tells a reporter who asked if she’s been vaccinated for COVID-19 that the question is “a violation of my HIPAA rights.” She is likely not the only member of Congress who thinks HIPAA is something it isn’t.

University of Vermont Medical Center discloses how ransomware took its systems down for a month and cost it at least $50 million – an employee took a hospital laptop on vacation and used it to open an email from their homeowners’ association, which had been hacked and whose email contained malware. When the employee came back to work and connected to the hospital network, the malware was spread.

HIMSS says it expects a smaller attendance for HIMSS21 than in previous years, but says that paid professional attendance has reached 75% of the 2019 total. First-time attendees make up 40% of the total registered. The exhibit hall will host 750 companies, 200 of them first-timers. HIMSS says that it is “mindful” of COVID-19 case numbers and recognizes that some registrants may not be able to attend due to various travel policies. A conference update says that all venue and hotel staff will be masked per recent Southern Nevada Health District guidance, while masks are encouraged but not required on the HIMSS21 campus since attendees must prove they’ve been vaccinated to enter.