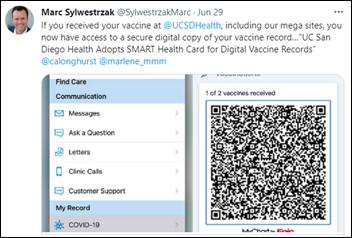 From Informatics Nurse: “Re: COVID-19 vaccination. Since the ruling was upheld to allow hospitals to make COVID-19 vaccination a condition of employment, five consulting companies have reached out, saying they have a need for vaccinated go-live staff. The contracts are for 2-4 weeks, starting immediately, with all expenses paid and at hourly rates not seen since 2009. The reason is the termination of unvaccinated hospital IT staff who must have felt themselves indispensable and immune (pun intended) from termination after years of working on the project with go-live impending.” Unverified. Consulting folks – are hospitals calling to get quick, short-term replacements for IT-related staff who were let go because they declined vaccination?

From Inappropriate Umbrage: “Re: interviews. Some you’ve done contain fun or insightful tidbits, while others seem to recite the obvious. How do subjects prepare?” They don’t, because I don’t give them a topic list in advance, I don’t allow anyone else to get on the call, and I don’t give them the interview transcript draft afterward for their approval or editing. I decided early on to  buck the trend of dull health IT “interviews” that are really just committee-formulated company responses to a emailed list of non-insightful questions. I interview CEOs only, talk about whatever interests me, and then run a full transcript of that conversation, so give those interviewees credit for being willing to have an actual unscripted dialog — much of it related to the industry as a whole rather than the company — and have it just appear on the site without any other personal or company involvement. That requires a certain amount of courage and trust by the subject and some tolerance by readers who might not recognize the pressure the subject is under in being interrogated by an anonymous nobody of uncertain agenda in an unfamiliar setting.

I watched Questlove’s powerful, exuberant “Summer of Soul” Monday on Hulu and it was a stunning documentary, a historical look back at the tumultuous 1960s that is backdropped by concert footage of the forgotten “black Woodstock” of 1969’s 300,000-attendee Harlem Cultural Festival over six weekends. Musical highlights for me were shockingly charismatic The 5th Dimension and Sly and the Family Stone (I’m not really a gospel-funk fan even though I acknowledge the obvious talents of Mahalia Jackson and Mavis Staples) and seeing Stevie Wonder drumming better than most drummers. The film sat unprocessed and forgotten in a basement for 50 years — thank goodness it wasn’t on videotape — yet it offers perfect audio quality and depicts a bold palette of 1960s colors that, like the festival, have been largely forgotten (seen any bands wearing matching Creamsicle orange suits lately?) Questlove is a multi-talented and curious genius, of course, and he stayed out of the film’s way, allowing the tears and wistful reminiscing glow of festival performers and attendees who were shown footage 50 years after the event to provide the narrative. This festival was 100 miles geographically and light years away culturally from Woodstock. Segments about the Vietnam war, assassinations, and the moon landing are jaw-dropping, and you’re left with the message that while the music and fashion have changed, the struggle has not.

I’m peeving once again on people who say they have “over 12 years of experience.” We know it isn’t 13 years or their carefully enumerative precision would have said so, maybe even rounded up if it was more than 12 years and six months, so why not just say “12 years of experience” and assume that the absence of those few extra months is immaterial? Otherwise, every since person’s resume would, except for one day per year, pointlessly describe their years of experience as “more than.”

An InterSystems TrakCare Unified Health Information System update includes integration with its HealthShare Personal Community patient portal to support appointment scheduling and synchronization of third-party app data with patient records; support for virtual visits using Google Meet, Microsoft Teams, and WeChat; and support for SMART on FHIR apps. TrakCare is used in 27 countries, although not the US.

In England, an Information Commissioner’s Office analysis finds that more data breaches occurred in healthcare between 2019 and 2020 than in any other sector examined, prompting NHS Digital to delay its plans to share the health records of NHS patients with third-party organizations.

A randomized controlled trial of a large company’s multi-site workplace wellness program after three years finds that while employees said they more actively managed their weight using the program, it otherwise had no impact on self-reported health, clinical health markers, healthcare spending or utilization, absenteeism, or job performance.

A Kaiser Health News report finds that rural, volunteer-based ambulance services are struggling to respond to calls due to a shortage of volunteers who are wiling to take the extensive emergency medical technician training and tests. it also notes that Medicare and Medicaid payments cover only about one-third of actual costs, leaving the services running in the red. Suggested solutions include funding EMS services via taxes, merging the services with fire departments, or turning them over to hospitals. 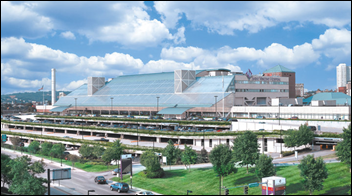 Saint Vincent Hospital (MA) CEO Carolyn Jackson cites an ongoing nurses strike as the reason for the Tenet-owned hospital’s decision to delay its Cerner implementation until early next year. The strike, which mostly involves concerns about nurse-to-patient staffing ratios, has been going on for nearly five months.