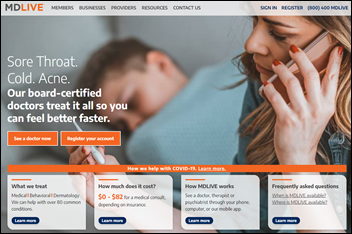 MDLive had raised $200 million and was reportedly valued at $1 billion early last fall, when it was considering an IPO. 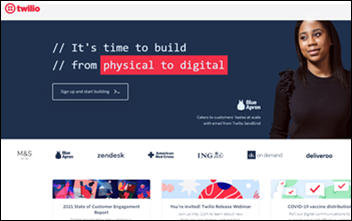 From Umbrella Beverage: “Re: Twilio. Was down Friday, affecting the ability of multi-factor authentication vendors (Entrust, Duo, Imprivata) to send out second-factor push or SMS notifications to phones, thus the ability of those users to access any services. Have the Russians figured out that Twilio is the center of the SMS universe?” Twilio’s incident log shows Friday downtime with “cross-platform API erors involving multiple products” that was resolved at just after noon Eastern on Friday. I’ll take this as an opportunity to provide some background on Twilio. The company offers APIs for sending and receiving phone calls and text messages, such as those for two-factor authentication, and Epic uses Twilio Programmable Video for its native telehealth offering. Twilio is huge, with 4,500 employees,  over $1 billion in annual revenue, and a $61 billion market cap. TWLO shares are like riding a rocket, up 240% in the past year versus the Dow’s 20% rise. Had you invested $10,000 on April 20, 2020 when the company’s deal with Epic was announced, you would be holding well over $36,000 in shares today. The co-founder and CEO is a multi-billionaire, of course.

One might quibble with the clinical and business operations of hospitals, but don’t doubt their ability to market themselves, although their owned medical practices don’t register to poll respondents any higher than independent ones (probably because they don’t always make their ownership obvious).

New poll to your right or here: How does your employer’s company culture compare today to a year ago? Define “company culture” however you like, but in general, think of the company’s social fabric – what it encourages or discourages, how it relates to employees and customers, how well its goals align with those of employees, and how its beliefs and leadership practices are likely to make it successful for the long term. Vote, then click the “comments” link to explain whether you saw changes during the pandemic.

March 1 isn’t spring, but with the changes in weather and COVID-19 trajectory, it feels that way, especially now that baseball spring training games have started. It was one year ago Friday that HIMSS20 was cancelled, an early warning that 2020 was going to be eventful in all the wrong ways. Parts of the country that were almost cold enough to store Pfizer’s COVID-19 vaccine on the back porch last week have swung to daytime highs that are nearly 100 degrees warmer. I get the feeling that the US economy is about to rebound vigorously, although national debt, lingering and structural unemployment, political divisiveness, and income inequality are sobering long-term issues that could have major geopolitical ramifications.

I started subscribing in 2017 to a little-known app called Texture, which was like the Netflix of magazines. Apple bought the company a few months later, subscriptions automatically lapsed while Apple retooled their acquisition, and I lost interest and didn’t sign up under the newly christened Apple News+. I discovered this weekend that Mrs. HIStalk had subscribed on her own, mostly to read The Atlantic, and I Googled to find that her $9.95 per month subscription can be shared by up to six family members under Apple’s Family Sharing (which also includes Apple’s music, TV, games, and ICloud storage subscriptions – am I the only person who didn’t know about this?) I’m back in, and minor quibbles aside about lost features (easy back-issue searching, such as for Consumer Reports), it’s better now. Included are a bunch of expensive national newspapers, like the Los Angeles Times and San Francisco Chronicle; the Wall Street Journal (!!); Business Insider; PCMag; National Geographic; Consumer Reports; and 300 magazines with a nice mix of travel, food, sports, and vacuous celebrity updates. Like Texture before it, you can follow specific publications or topics, but it also brings up articles it thinks you’ll like based on your perusal habits, giving you an endlessly scrolling page of reading material that beats the heck out of killing time on Facebook looking at feta pasta recipes and faked prank videos.

Humana will offer its Medicare Advantage customers who are patients of Mercy access to the health system’s Mercy Virtual telehealth service. Also included in the agreement is a value-based care component, where Humana will pay Mercy based on outcomes instead of fee-for-service.

TriNetX appoints four new members to its board following October’s acquisition of a majority stake in October 2020, including former Pfizer Chairman and CEO Ian Read as chair. 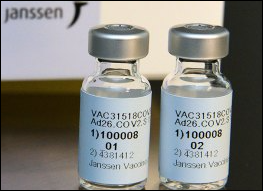 FDA issues its Emergency Use Authorization to the COVID-19 vaccine of Johnson & Johnson’s Janssen subsidiary, a single-shot product that requires simple refrigeration instead of the two-shot, freezer-stored vaccines from Pfizer and Moderna. The boost in vaccine supply to 20 million doses per week, along with the new vaccine’s simple storage requirements, could add up to 25% to US vaccination capacity almost immediately. Mostly missed by the press – the first two vaccines were tested before coronavirus variants surfaced, so their efficacy against them is unknown, but the J&J vaccine were tested later and was proven to be effective against those variants (suggesting that the other two vaccines probably are also effective).

CDC reports that 73 million doses of COVID-19 vaccine have been administered out of 96 million distributed (76%), with 19% of the adult US population having received at least one dose. The pace could soon reach 3 million doses per day. 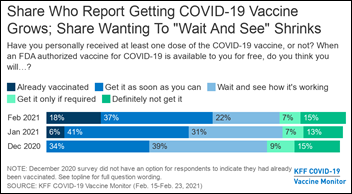 A KFF poll finds that the percentage of Americans who plan to wait and see before being vaccinated has dropped from 39% in December to 22% now. The 15% who say they won’t get it under any circumstances remains unchanged. Groups with the highest resistance to being vaccinated are Republicans and rural residents, while 25% of non-healthcare essential workers and 14% of healthcare workers fall into the “wait and see” category.

The state of California declines to renew its coronavirus mobile testing contract with Alphabet-owned Verily, which the federal and state government touted last year as a high tech approach to help Americans find COVID-19 testing. The state says the program, which cost $63 million and was operated entirely by subcontractors, didn’t serve poor areas of the state. Optum/UHG-owned OptumServe is now operating state vaccine clinics, but one county had already cancelled its contract with OptumServe, saying that its testing clinics were poorly run, performed only a few dozen tests in each 12-hour session, spent a lot of money sending negative tests results by FedEx next-day delivery instead of electronically, and were staffed by employees who were “coughing violently” and not wearing PPE.

A two-year study finds that Medicare’s PAMA decision support requirement for ordering expensive advanced imaging exams – as implemented with Change Healthcare / National Decision Support Company CareSelect – improved ordering appropriateness. The authors note the limitations of their study – inappropriate use could have been reduced by other simultaneous changes, users can game CDS by choosing an invalid ordering reason, and the lack of pre-CDS implementation data – but their next step will be to have experts determine order appropriateness by reviewing EHR and imaging data.

A few Epic employees told the Madison paper that the company has told employees to stop holding discussion groups related to diversity, equity, and inclusion on company time and has eliminated a training session on identifying white privilege. The article notes that Epic, with $2.9 billion in annual revenue and 10,000 employees, is unusual for not having a chief diversity officer or other executive to manage equity and inclusion and instead created a a diversity council made up of five employees who still work in their full-time jobs.

A Florida pediatrician who was arrested on child pornography charges asks the court to let him conduct telehealth visits. He initially told investigators that he thought he was downloading photos of older girls, but finally agreed with a detective’s observation that a pediatrician should be able to recognize pre-pubescent children.