Population health management technology vendor Innovaccer raises $105 million in a Series D funding round, increasing its total to $225 million and valuing the company at $1.3 billion. 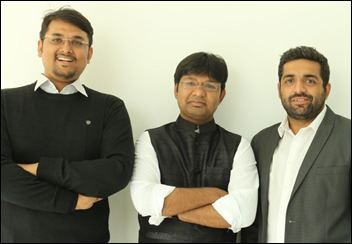 From Inquiring Minds Wanna Know: “Re: Olive Health. No HCIT firm in recent years has gotten more favorable press. Not Catalyst, Zocdoc, or any of 10 other ‘show ponies’ trotted out by leading healthcare PE outfits like Francisco Partners or Vista Equity. Is it enormous budget or a new healthcare PR firm?” The company has wrapped what seems like mundane technology in a thick layer of trendy buzzwords and Silicon Valley brashness for a business whose first funding round (of $450 million total through a Series F) was a Series A in 2013. I’m surprised that the company hasn’t arranged a quick IPO or SPAC merger to take advantage of a frothy stock market, but until that happens, the only folks who can pore over its financials are the investors who have driven its valuation to $1.5 billion. I will say this, having had many HIStalk sponsors over the years whose renewed PR efforts were followed shortly after by being favorably acquired: it’s worth the effort to get a company’s message – whether pointless buzz or meaty news — out to gain and retain the attention of prospects and investors, especially the latter when those SPACs are desperately looking for acquisitions. I am uncomfortable with companies and people that promote themselves shamelessly, but I begrudgingly acknowledge that it’s hard to be successful if nobody has heard of you. Any press, good or bad, is better than no press.

From RTW: “Re: COVID-19. The biggest need is to reopen travel and offices, agreed?” No. The biggest need is to reopen schools, whose closing was scantily supported by evidence in the first place. The economy, our future economic prospects, and the mental health of citizens will suffer as long as parents are forced to stay home with their kids who are receiving an inferior online education and missing important social services and developmental opportunities with effects that won’t be obvious for years. Some parents would rather keep their kids at home, which is fine, but most would welcome that aspect of returning to semi-normal rather than expanding restaurant and bar capacity and allowing bigger sports crowds. Much has changed and been learned in the pandemic’s first year.

From Google Clusters: “Re: Google Care Studio. Recall that Epic stopped working with Google Cloud a year ago over privacy concerns.” Epic announced in January 2020 that it was calling off further integration with Google Cloud and instead would focus on Amazon Web Services and Microsoft Azure because of customer interest. Google was at that time facing privacy criticism from its deal with Ascension to develop EHR search and aggregation tools in a project that was named Care Studio this week, but I don’t recall that Epic specifically mentioned privacy concerns in its decision. Cerner also passed on Google despite a rumored incentive in the tens of millions of dollars, going with AWS instead. 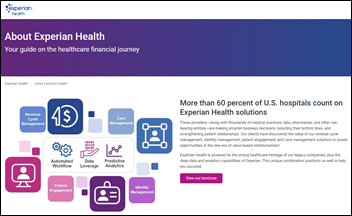 Welcome to new HIStalk Platinum Sponsor Experian Health. The company collaborates with more than 3,400 hospitals and 7,300 other healthcare organizations representing 500,000-plus providers — almost 60% of the market — to provide data-driven platforms to empower its clients to make smarter business decisions, boast a better bottom line, and foster stronger patient relationships. Its industry-leading solutions include revenue cycle management, identity management, patient engagement, and care management. Thanks to Experian Health for supporting HIStalk.

Here’s the recording of Wednesday’s webinar, “Maximizing the Value of Digital Initiatives with Enterprise Provider Data Management,” sponsored by Phynd. 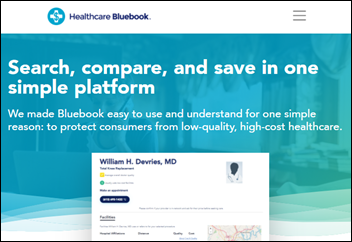 Redox raises $45 million in a Series D funding round, increasing its total to $95 million. 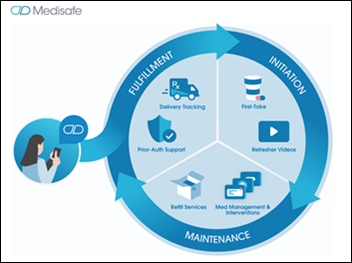 Teladoc Health reports Q4 results: revenue up 151%, EPS –$3.07 versus –$0.26, beating revenue expectations but falling short on earnings that were affected by acquisition and share payout costs from its $18.5 billion acquisition of Livongo in October 2020. Teladoc said in the earnings call that it provided 10.5 million virtual visits for the year and brought on 15 million new paid members. Share price dropped 14% Thursday, valuing the company at $32 billion. TDOC shares are up 123% in the past 12 months versus the Nasdaq’s 42% gain. 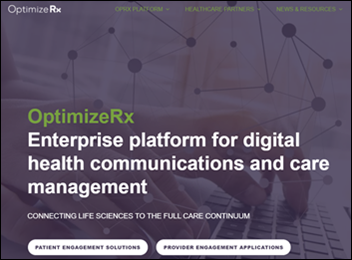 EHR prescription messaging platform vendor OptimizeRx reports Q4 results: revenue up 123%, adjusted EPS $0.20 versus $0.07, beating Wall Street expectations for both. OPRX shares have risen 420% in the past 12 months versus the Nasdaq’s 42% gain, valuing the company at $930 million.

Montgomery County Memorial Hospital (IA) promotes Ron Kloewer, MHA to CEO. He was CIO for 28 years before being promoted to COO in November 2020 and tapped to replace the retiring CEO next month.

InterSystems releases an enhancement to its TrakCare health information system that will allow UK sites to schedule COVID-19 vaccinations.

A Georgia man is sentenced to six months in federal prison for falsely claiming that his former girlfriend – a hospital nurse – violated HIPAA by emailing pictures of trauma patients outside the hospital.

CDC reports that 66 million of 89 million COVID-19 vaccines distributed have been administered (75%). About 6% of Americans have been given both doses.

A physician-epidemiologist says that COVID-19 shaved just five days off average US life expectancy in 2020, not the one-year number that CDC published last week. Public experts use life expectancy projections that assume no change from one year to another, which have been shown to distort the impact of events that affect mortality for only a brief part of the average lifetime, such as pandemics and wars. In other words, losing a full year of life expectancy would require the same number of pandemic deaths every year for the rest of someone’s life, when in fact life expectancy will almost certainly rebound to that of previous years once the pandemic is over.

FDA’s vaccine advisory committee finds that J&J’s COVID-19 vaccine offers high efficacy across all demographics, based on the company’s study data. The J&J vaccine will likely earn FDA’s emergency use authorization in the next few days. All major vaccines (J&J, Pfizer, Moderna, Novavax, and Sputnik) offer 100% protection against death or hospitalization (hat tip on that to @EricTopol), so take whatever one you can get. 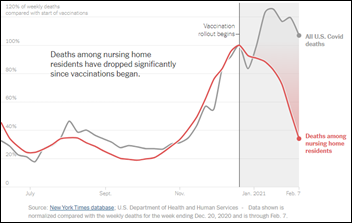 US nursing home deaths from COVID-19 have fallen by 65% in the past two months as 4.5 million residents and employees have received at least one dose of the vaccine. The drop-off is even more pronounced than of the population in general.

Washington State Department of Health cuts off COVID-19 vaccine shipments to publicly traded concierge medicine provider One Medical after complaints that it provided doses to its own executives and customers who were not eligible under local guidelines. The company also offers the vaccine to all of its employees regardless of their risk factors or exposure. Doctors report that young patients with no health issues were able to sign up for a trial membership and then book a vaccination appointment even though health workers were being waitlisted, with the company responding that upgrading its systems to screen appointments was too hard and that it won’t question someone’s declaration that they are eligible. 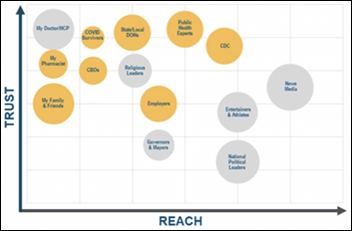 The Ad Council looks at COVID-19 messaging for its upcoming pro-vaccination campaign, saying that positive messages (acknowledging hesitancy concerns, vaccination as a pathway to regaining human connection, protecting family, and acknowledging personal choice) will work better than negative messages (fear tactics, referring to “the right thing to do,” overpromising, and emphasizing “back to normal” that most people won’t experience). Most interesting to me is the level of trust people place in various messengers.

ECRI’s health IT patient safety workgroup publishes a white paper on reducing alert fatigue. One of its recommendations is a standard set of metrics for monitoring and optimization: 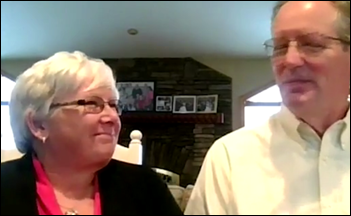 A Cleveland TV station profiles Peggy and Bill Schneck, who met as 17-year-old service workers at Cleveland Clinic in 1975 and were married four years later. He studied IT and is a Cleveland Clinic systems analyst, while she became an RN and is now a nursing informatics instructor.