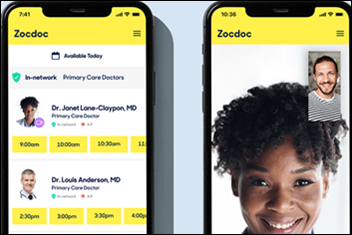 The company says that its pricing change two years ago – from a flat per-provider subscription to a per-booking model that angered some doctors who had to pay more and who expressed concern about possible kickback implications – has grown its network by 50% in some states.

Zocdoc has raised $376 million through a Series D round.

Co-founder and former CEO Cyrus Massoumi sued the company last fall, claiming that three officers – two of whom he says he was going to replace – conspired to orchestrate his ouster after eight years. He said in the lawsuit that the company was in steep decline, couldn’t raise further capital, and had resorted to taking on debt at high interest rates. The lawsuit was dismissed by a New York court that said the suit would need to be filed in Delaware instead.

From Data Broker Not Broke: “Re: Truveta selling anonymized patient data to drug companies and researchers. Is that ethical?” Not in my opinion, especially since those patients get nothing in return and can’t opt out. The hospitals that collect their information as a by-product of selling them medical care don’t even have to let them know beforehand because of HIPAA’s covered entity-friendly “treatment, payment, and operations” terms. Facebook, Google, and other sites violate our privacy in mostly harmless ways and they at least give us their product free in return (try asking those 14 Truveta health systems for some medical freebies). Unlike those apps, though, the information is anonymized and is not used to display something to its owner, so it’s not really visible. We will all be paying in other ways – the deep-pockets drug company customers who are writing the checks to Truveta members will simply jack up their drug prices a little bit more or pocket the higher margins of not having to spend as much on clinical studies. We might as well acknowledge that the wholesome-sounding “medical research” is really just product R&D for drug and device companies, often funded by taxpayers and given to those companies at no cost to sell expensively back to us.

From Huckleberry: “Re: Clubhouse app as an audio-only social network. Have you tried it?” I have not tried it or found reasons to even though I know it’s the latest shiny object. It seems that many platforms initially succeed because early adopters who have a lot of expertise and insight develop a quick following, but then everybody and his imitative brother piles on to fill the endless space with junk just because they can, causing the best of them to move on to seek better company. We’ve seen it with blogs, vlogs, Facebook, Twitter, Medium, podcasts, newsletters, vanity book publishers, YouTube, Google Hangouts, Periscope, and more, where the platform’s best and worst feature is that it democratizes content creation. I expect Clubhouse will get its 15 minutes before it becomes yet another low-value wasteland. Online text is the only medium that allows me to consume it my way – skim quickly or study slowly and click original source links that will be missing in every other format. As to Clubhouse, I don’t know of many folks who could hold my attention for more than a couple of minutes as they babble away in real time. The most interesting people aren’t wasting their time pontificating incessantly to the masses. 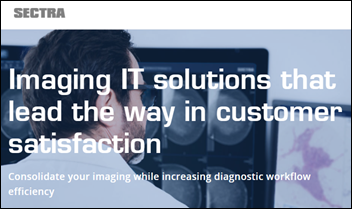 Welcome to new HIStalk Platinum Sponsor Sectra. With more than 30 years of innovation and approaching 2,000 installations worldwide, Sectra is a leading global provider of imaging IT solutions that support healthcare in achieving patient-centric care. Sectra offers an enterprise imaging solution comprising PACS for imaging-intense departments (radiology, pathology, cardiology, orthopedics), VNA, and share and collaborate solutions. The company is leading the way in digital pathology with multiple, fully digital installations throughout the world. Sectra is top-ranked in “Best in KLAS” and #1 in customer satisfaction in US, Canada, and Europe PACS. Thanks to Sectra for supporting HIStalk.

Something jogged my memory of Bats Global Markets, a Kansas City-based stock exchange that was started by former Cerner employee Dave Cummings in 2005. I wrote about it many years ago and I see that it was acquired in early 2017 for $3.2 billion. Cummings remains sole owner of Tradebot, a high-frequency stock trading platform he started in 1999 that at one point was making him $140 million a year in profit. The company holds shares for an average of 11 seconds, had at one point enjoyed a four-year run of positive daily profits on trades, and accounts for 5% of all US stock trades. Cummings has credited his success to the mentorship of Neal Patterson, former chairman and CEO of Cerner. My keyboard’s zero key probably doesn’t have enough click life left to express his net worth.

Canada-based CloudMD will acquire online eyeglass, contact lens, and online vision test vendor VisionPros for up to $80 million in cash, shares, and performance earn out. 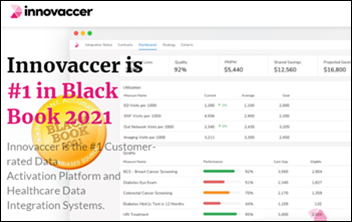 Population health management platform vendor Innovaccer is rumored to be arranging funding that will value the company at more than $1 billion.

CompuGroup Medical US names industry long-timer Derek Pickell as CEO. He comes from EMDs, which CGM acquired in late December 2020 for $240 million, and replaces Benedikt Brueckle, who is now CFO.

Sutter Health will eliminate 277 jobs, most of them in IT.

In Israel, a study of 600,000 people who have received two doses of Pfizer’s coronavirus vaccine finds a 94% drop in symptomatic infections and a 92% reduction in severe illness. The study was the first to show a high level of vaccine efficacy specifically in people 70 and over.

New York Governor Andrew Cuomo admits for the first time that the state’s nursing home COVID-19 death counts were underreported by 40% by omitting long-term care residents who died in hospitals. Cuomo says he delayed giving the information to state legislators for fear it would trigger a federal civil rights investigation. 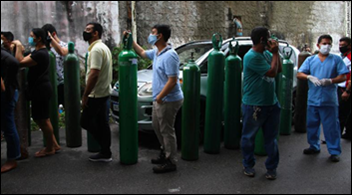 The remote, 2.2 million population Brazilian city of Manaus has seen COVID-19 consume nearly all of its hospital and ICU beds and depleted oxygen supplies, with dozens of Brazilians dying of asphyxiation over two days in January alone. Few planes there can transport oxygen, so it must be shipped in a week-long boat trip up the Amazon River. Brazil President Jair Bolsonaro, who has said that COVID-19 is a “measly cold” and a media hoax intended to harm him politically, says it isn’t the federal government’s job to send oxygen to Manaus. Brazil’s COVID-19 death count is at 240,000, second globally only the US’s 486,000.

Walmart begins scheduling COVID-19 vaccination appointments at some of its stores. 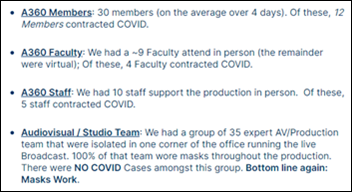 X Prize founder and entrepreneur Peter Diamandis, MD, MS says he “screwed up” by holding an illegal in-person California summit last month for several dozen wealthy executives who paid more than $30,000 each, saying they would be safe from COVID-19 because of mandatory pre-event and then daily testing and onsite vitamins and doctors. Three weeks later, at least 24 attendees of Abundance 360, including Diamandis himself, have tested positive. Diamandis, who co-founded coronavirus vaccine company Covaxx, admits that he didn’t force attendees to wear masks, but claims the event wasn’t actually a conference but rather a broadcast with a small live audience since most attendees were virtual. Zero of the 35 audiovisual production staff, all of whom wore masks, tested positive.

Two hospitals in France are hit by ransomware in a single week, while a third cut off network connections to one of its IT suppliers that had been attacked.