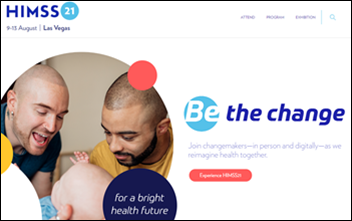 HIMSS confirms that HIMSS21 remains on schedule for August 9-13 in Las Vegas, but announces that it will also include a virtual component.

HIMSS will determine later — based on vaccination rates, infection rates, and federal guidelines – whether it will need to cancel in-person activities in Las Vegas.

The next HIMSS21 update will be published on February 19, which will include announcement of the date on which registration will open.

From Just_a_CIO: “Re: HIMSS and CHIME. Getting a divorce, as quietly announced a while ago but in a more formal letter from CHIME this week. This likely further dooms HIMSS to the boat show only role and maybe gives CHIME a chance to get back to its roots with a more educational / peer-to-peer event. Vendors will always play a role since someone needs to pay to put these things on, but it seems CHIME has a better shot at striking the right balance as a smaller, more focused conference. What do you think?” CHIME confirms that it won’t be participating in HIMSS21, as the organizations “have decided to explore different directions in how we serve and grow our memberships.” CHIME will offer broadcast events in April and June and presumably others to follow, and had already announced that the Fall Forum in October will also offer a hybrid model. Here are my random thoughts as the reader requested:

From Masshopper: “Re: VPay. Have heard that Optum is acquiring the company, adding to its healthcare payments and clearinghouse capabilities that it gained with the purchase of Change Healthcare last month.” I haven’t heard anything.

From Toothpick It: “Re: Olive’s new PR. What exactly is ‘AI cybernetics?’” I don’t think the term “cybernetics” is used much these days, but it involves feedback loops, which one could argue that in the absence of connections to physical devices like an artificial pancreas or something, simply means computer programming or scripting. Olive’s latest announcement says its product is being used by 675 US hospitals to deliver $100 million in efficiencies (that’s around $150,000 per hospital). It tripled headcount to 550 “Olivians” in the past year and will double it again in 2021 in a distributed work model it calls “The Grid.” You have to think that some science fiction nerds are involved.

Zyter acquires population health software vendor Casenet from Centene, which had acquired the company in 2012.

Premier CEO Susan DeVore will retire effective May 1, 2021. She will be replaced by President Mike Alkire. 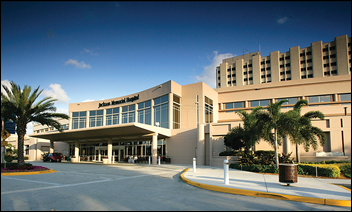 The federal government says it will start delivering vaccine directly to 6,500 chain pharmacy stores starting next week to provide more vaccination sites. Walgreens, CVS, and Rite Aid are among the 21 chains involved.

Beaumont Health System (MI) temporarily shuts down its COVID-19 vaccine scheduling system after a user finds and shares an Epic loophole that allowed 2,700 ineligible patients to schedule appointments that were ultimately cancelled.

MIT Technology Review covers the many shortcomings of CDC’s $44 million VAMS vaccine management system — built by Deloitte under a no-bid contact — that South Carolina’s health department head “says has become a cuss word.” Nearly all states are passing on the free system and either building their own or paying for commercial systems, and people who are trying to use it to sign up for shots are so frequently unsuccessful that vaccine doses are going unused. The authors note that while it might seem questionable that Deloitte was given the no-bid contract despite a history of similar failures, CGI Federal has earned $5.6 billion in federal IT work since being fired for the Healthcare.gov debacle.

North Carolina upgrades its CVMS vaccine management system that one county health director says is a bigger problem than vaccine shortages. Clinics have found that it takes eight hours of data entry to record each one-hour administration of 200 vaccine doses, and that any data entry errors must be corrected at the state level.

Some California county and local health officials question the decision last week by Governor Gavin Newsom to turn COVID-19 vaccination over to Blue Shield of California, which was given an emergency, no-bid contract. Those officials note that Blue Shield has no history with a similarly sized project, the organization is a Newsom political donor, and it has minimal relationships with underserved communities. Blue Shield’s bar for success is low given that county efforts that have resulted in confusing appointment systems, shifting vaccine eligibility rules, long lines, and faulty data collection that has left the state unable to say exactly how many doses have been administered. Kaiser Permanente will run its own program for 9 million members and assist Blue Shield, but says slow vaccine shipments mean that at the current rate of vaccine deliveries, it will take four years to give just its own members their first doses.

Studies of Russia’s Sputnik COVID-19 vaccine find that it is 92% effective, with zero severe cases or deaths in the active group. Phase III results suggest that most of that effectiveness may occur after the first dose, with researchers now investigating a single-dose regimen. Mexico has already signed a contract for Sputnik and is expected to issue emergency use authorization almost immediately. The Russian government says that going through the US regulatory process isn’t a priority. 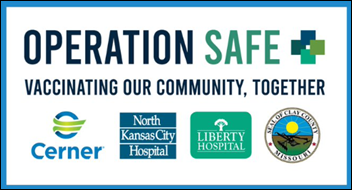 Four hundred Cerner employees will help administer COVID-19 vaccines at company headquarters later this week as part of the Operation Safe coalition in North Kansas City, MO. The coalition, which includes local hospitals and governments, hopes to vaccinate up to 4,500 people every other week.

Nine top New York health officials have quit as Governor Andrew Cuomo addresses vaccination delays by taking control away from state and local public health officials and giving it to large health systems in declaring that he doesn’t trust government scientific experts. Those workers say Cuomo blindsided them with policy decisions and ignored their plans that had required years of preparation, instead relying on long-time advisors, consultants, and a lobbyist from Northwell Health to make decisions. A former New York City health official and epidemiologist says the government lost control of vaccination pacing early by giving most of its doses to hospitals, which they say lack the skills, experience, and perspective to manage a public health initiative. 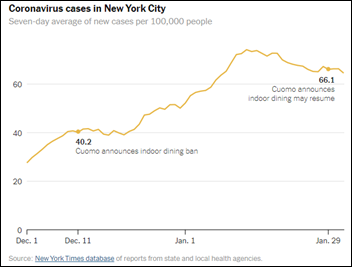 Meanwhile, Governor Cuomo says he may reopen indoor restaurant dining on Valentine’s Day even though per-capita case counts are 64% higher than when he halted indoor dining in December. The New York Times says that the graphs he used to illustrate a recent drop in test positivity rates are misleadingly optimistic in several ways. 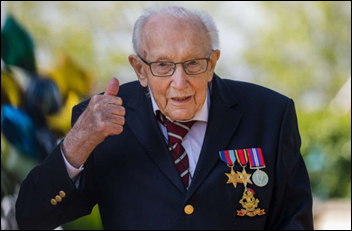 In England, World War II veteran Captain Sir Tom Moore, who raised dozens of millions of dollars for NHS last year by walking through his garden to observe his 100th birthday, dies of COVID-19.

The New York Times finds that major health systems are declining to bill Medicaid for treatment of auto accident injuries and are instead placing liens on the accident settlements of patients for the full, undiscounted list prices of services rendered. Medicaid would have paid $2,500 for one patient’s treatment, but the hospital used a lien to go after $13,000. Hospitals are asking patients to sign waivers agreeing to not bill insurance, telling them their insurer shouldn’t have to pay for an accident someone else caused, failing to mention that signing means the patient themselves will pay the full price out of any settlement they receive. HFMA, in an apparent “if it’s not illegal it must be ethical” view, says it is reasonable for hospitals to seek payment from whoever will pay the most. 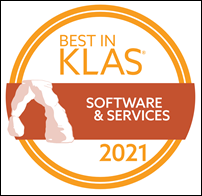 KLAS announces “Best in KLAS Software & Services 2021,” which includes a change in which products in niche categories are awarded full “Best in KLAS” distinction rather than the previous “Category Leader.” Some of the winners are:

Some of the individual category winners:

Financial, Revenue Cycle, and HIM