Cerner Chairman and CEO Brent Shafer said in the internal announcement that the company’s annual client survey results require a greater sense of urgency in strengthening relationships, delivering on promises, innovating faster, and executing on strategies. 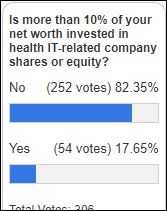 Most poll respondents don’t have a significant chunk of their net worth invested in health IT company ownership.

New poll to your right or here: For those who have worked for a company or healthcare organization that was acquired, how was your job afterward? I’ve mostly worked for big health systems that were the acquirer, which worked out well for me. My job also didn’t change much during my stint with a bottom-feeder vendor whose series of owners couldn’t wait to pawn it off on someone else like a gas station Christmas fruitcake, but only because (a) it wasn’t that great of a job to begin with; (b) I was somewhat safe as a clinical-technical subject matter expert who was happy to keep my head down while the mahogany row battles were being fought above me (literally and figuratively). My sense is that having your company acquired for unfavorable terms brands you with the collective stench of your previous employer’s failure, while those who actually captained the ship into the iceberg elbow women and children aside in fleeing for the corporate lifeboats.

The suddenly overused word that I’m sick of hearing: all forms of “lean,” including lean in, forward-leaning, left- or right-leaning, and leaning into. Unless you’re talking about someone who is unsteady on their feet, a carburetor, quality improvement, the director of “The Bridge on the River Kwai,” or that tower in Pisa, better word choices are available. 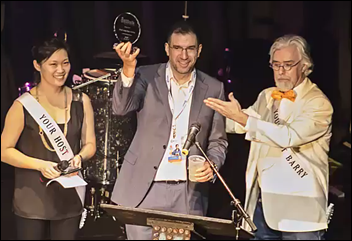 Former Acting CMS Administrator Andy Slavitt, who was previously CEO of OptumInsight and more recently founder of non-profit United States of Care, will take a temporary role as advisor the President-elect’s COVID team. That’s him accepting his “Healthcare IT Industry Figure of the Year” award at the final HIStalkapalooza in New Orleans in 2017, which was right after I interviewed him.

CDC says the more contagious B117 coronavirus variant will become the dominant strain in the US by March, which some experts predict will happen even sooner based on UK experience. In addition, the B1351 variant is probably already active in the US and may be resistant to at least one antibody therapy. Former FDA Commissioner Scott Gottlieb, MD says that new COVID-19 cases have likely peaked, but deaths and hospitalizations will continue to grow over the next few weeks as a lagging indicator.

CDC reports that as of Friday, 12.3 million people have received COVID-19 vaccine first doses versus 31.2 million doses distributed, with less than 40% of available doses actually given.

HHS imposes term limits on its top few dozen scientists at FDA and CDC, who would face reassignment every five years, in a rule that the new administration is likely to cancel.