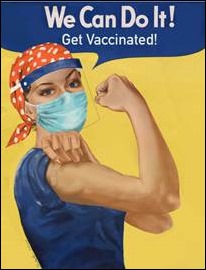 My weekend took a decidedly positive turn after I was able to get my second dose of COVID vaccine. The side effects were a little more noticeable compared to the first dose, with a brief temperature elevation and headache. Tylenol and a nap vanquished them both, although I felt a little more tired than usual, but it’s unclear if that was from finally being able to let go of the anxiety of whether I’d be able to get a second dose or not.

It is unreal that frontline physicians who are actively caring for COVID patients would have to worry about getting a vaccine, but that’s the reality in many states across the US. I’m active in several nationwide physician forums and the majority of states are having difficulty vaccinating all frontline healthcare workers, while others are already vaccinating the general population based on age and comorbid conditions. We certainly live in interesting times. Artwork credit: physician Cindy Hsu.

I received the Pfizer vaccine and should reach target immunity two weeks after the second dose. I still don’t get to change any of my habits since the vaccine is only proven to reduce the risk of severe disease and/or death – we don’t have strong data on reduction of transmission at this point, although those studies are ongoing. There’s still the risk of being infected with COVID. I’m just less likely to die, which is a good feeling to have when you’re exposed to 20 or more COVID-positive patients a day.

My area continues to be in a surge that is being fueled by mass defiance of the county’s “safer at home” order, which means I still get to deal with heartbreaking situations at the office as people infect their grandparents and other loved ones when we are so close to getting vaccines for them.

A non-medical friend wasn’t aware of the lack of transmissibility data and asked me how long I planned to continue strict masking. After explaining the limits of the vaccine, I mentioned that I’ll most likely be masking forever. It’s not due to a concern about disease or contagion, but the fact that I’ve lost all ability to control my facial expressions simply due to the volume of ridiculous statements I have to hear on a daily basis. Plenty of patients still believe that the vaccine contains microchips or has the capability to modify human DNA, science be damned. As a physician, the most effective treatment I have right now is education, and although I’m happy to deliver it, I miss the days when I could solve problems with a flip of my electronic prescription pad.

The best side effect of the vaccine was the fact that I received it at a facility where I hadn’t previously been a patient, which exposed me to their version of Epic’s MyChart platform. Compared to the version being used by Big Medical Center where I usually receive care, it was amazing. Clean lines, no clutter, no distracting colors, and a much cleaner view of upcoming and past appointments. The medication list was easier to read without distracting color as well. Knowing that Big Medical Center is typically reluctant to take upgrades or to stay current with general release versions of software, I can only assume my new access is to a later and greater version.

I also haven’t been overwhelmed with announcements and updates from the new platform, so perhaps their communication plan or governance is a little tighter as well. It will be interesting how these contrasts play out now that I have access to both systems. I’m also curious to see how long it will take my previous employer to upgrade to the latest and greatest.

I spent a good chunk of time preparing my plan for the Consumer Electronics Show. I’ve never been in person, but have seen a lot of media reports and the in-person version sounds pretty overwhelming. The online schedule is a full one, but I suspect that like HIMSS, most of the interesting finds are found by checking out the exhibitors, which is a bit of an interesting process for most of the virtual conferences I’ve attended. I’ve been poking around the website and haven’t found anything that looks like a virtual exhibit hall yet, although there are lists of exhibitors and I’ve been getting plenty of emails from them. We’ll have to see if new features go live once the show officially starts tomorrow.

I’ve already identified quite a few digital health, wellness, smart home, and lifestyle vendors that I want to check out. I’m involved in some efforts to promote aging in place for older patients, so I hope there are innovative solutions that won’t cost an arm and a leg but will give patients and families greater peace of mind. Based on the lockdowns of the past year, so many people are afraid of moving to retirement communities or assisted living facilities even when they could benefit from expanded services. Hopefully, organizations have moved to fill that need. Kohler is scheduled to debut some smart home kitchen and bath accessories, but I’ll also be looking for design inspiration to finally complete what is possibly the world’s longest bathroom remodeling project.

Of course, there are also cool things that are not directly related to healthcare, but may provide interesting innovations in a secondary capacity, such as the unveiling of the world’s first autonomous racecar at the Indianapolis Motor Speedway. There are over 500 university students competing to win a $1.5 million prize in what’s billed as “the world’s first high-speed, head-to-head autonomous race.” The engineering types in my household are particularly excited to hear what that’s all about.

Some of my show sessions start as early as 6:30 a.m. local time, so I’d better get my rest this week if I’m going to keep up. Unlike the typical Las Vegas show, though, I’ll be able to readily access snacks from my own refrigerator and won’t have to wait in an eternally long line for a bad cup of convention hall coffee. I’ve stocked in extra martini supplies so I can pretend like I’m actually at a trade show.

If you’re attending CES, let’s have a virtual cocktail together. You can find me on Twitter: @JayneHIStalkMD