Allscripts files a trademark lawsuit against telemedicine and urgent care startup CarePortMD over its name. Allscripts says CarePortMD is confusingly similar to the name of CarePort Health, which Allscripts is selling to WellSky, and the healthcare market will be confused.

CarePortMD changed its name from ER at Home in September 2018. CarePort Health earned its trademark in early 2013.

From Mighty Boosh : “Re: HLTH conference. I’m wondering if readers could share their reviews and recaps about how it went virtually? I’ve always thought it was silly to have another HIMSS-type conference, but the speaker lineup this year looked great even though I didn’t muster up the $700 to register.” I would be interested in knowing myself. Any attendees want to jot down their thoughts?

From Hospital CIO: “Re: today was a good day. It was boss day and our administrative team put together a nice spread of goodies. A team member who has struggled with the impact of their behavioral self-awareness send me a note thanking their manager for their patience and guidance through a difficult time. In corporate news, Allscripts told employees they will pay back those who were affected by temporary salary reductions during COVID and HCA said it will return its $6 billion in government COVID funding. Good news should lift the spirits of all of who who are dealing with COVID and its related impact on our jobs and personal lives. It might even influence others to do something for the ground troops.”

From Stretched Spandex: “Re: cybernetics. Olive hired executives for jobs with cybernetics in their title. Does that actually mean anything?” Cybernetics is a fancy term for creating a device or system that controls a process automatically using a feedback loop, like a thermostat or self-driving car. Olive describes its Olive Helps as “using cybernetics to provide real-time intelligence while they’re [human workers] handling their most critical tasks.” Its examples are less lofty that the term used to collectively describe them — checking insurance coverage, pushing work lists to nurses, standardizing OR preference cards, and dynamically adjusting materials inventory and ordering. The bottom line is that if it can do that work as well as humans without the cost that humans bring with them, it should be useful, at least if hospitals are willing to use it and to offset the expense by reducing headcount. But you could say that with most any healthcare software.

From Undulating Wave: “Re: [vendor name omitted]. I resigned to take a higher-paying job. They have offered to match the offer I received. Should I stay where I am, which would result in less family disruption?” I would take the new job. Buy-backs rarely benefit either the employee or the employer. You had reasons to leave a company that has failed to pay you the market value that you command, so why would you want to stick around? And why should they give you more money now when you’ve already proven yourself to be available to the highest bidder? It is true, however, that employers rarely make an effort to compensate people according to their contribution or value, so someone’s paycheck often reflects (a) less than they would get if they shopped their skills elsewhere, thus they will need to move out to move up, or (b) they are overpaid or have low-demand, easily replaceable skills and should do they can to keep the job they have. I’m a Maslow’s Hierarchy guy and would say that money should be a motivator only to the extent you earn enough of it to be comfortable, which then leaves belonging, esteem, and self-actualization, which is asking a lot of the company that is buying your time. You gain skepticism of the employer-employee relationship once you’ve been marched off their property while carrying a shockingly small box of your now-pathetic personal effects. 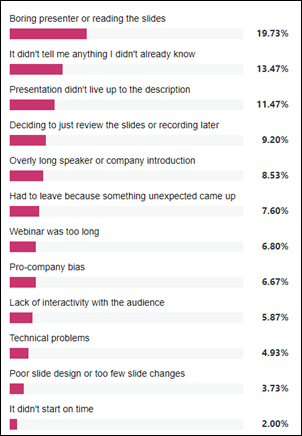 Presentation style is what keeps webinar attendees engaged, poll respondents say. Don’t be boring or read your slides, don’t rehash material the audience already knows, and don’t present content that fails to deliver what the abstract promises (I usually see that when someone other than the presenter writes the abstract and learning objectives). I’m sure those presenters are torn in making their slides (a) detailed enough for non-attendees to review standalone afterward, versus (b) not so detailed that the speaker’s presence is superfluous because everything they have to say is right there on the slide. I suppose that leads to a more philosophical question – how can a webinar (or a podium presentation, for that matter) add value over just writing an article instead? I think the answer probably involves answering attendee questions, unless the presenter is to enthused and personable that the written word alone can’t do their content justice.

New poll to your right or here: Have you taken a consumer DNA test such as AncestryHealth or 23andMe? I have heard countless stories about people whose test results indicated that a parent or sibling wasn’t genetically connected or that they had brothers or sisters they didn’t know about. Most interesting is that those services invite you to make a connection with those strangers whose DNA you share as a previously unknown parent, child, or sibling. The most common surprise seems to be men who fathered children unknowingly or people who raised someone else’s child as their own. My conclusion: it may not be as useful as we think to ask patients about their family medical history when the social and DNA versions of “family” aren’t the same. 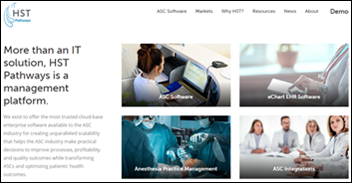 The UK Space Agency provides funding for Apian, which was founded by two medical students who are also NHS Entrepreneurs to create a nationwide NHS Air Grid to support COVID-19 related lab sample and supply delivery. The company has created a healthcare drone API to simplify adoption. The company launched its first drone, which can carry 4.4 pounds of cargo for up to 60 miles, on Saturday.

Blue Shield of California saves $10 million in prescription costs over two years by using Gemini Health’s drug cost transparency tool, which integrates with the EHR to give clinicians prescription cost information and alternatives at the point of prescribing. 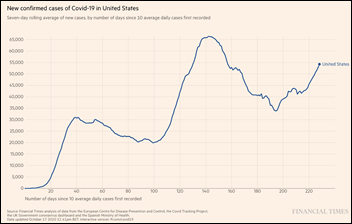 The tough COVID-19 winter and third surge are getting an early start, as new US cases top 55,000 per day and hit 69,000 on Friday, 14 states are recording their highest-ever new case counts, and hospitalizations are steadily rising. Some states are warning their residents that hospitals are full. Test positivity exceeds 20% in ID, IA, SD, and WI. IHME projects 181,000 more deaths by February 1, which would take the US death count to 400,000.

The 2020 federal deficit hits a record $3.1 trillion from pandemic spending, more than 2.5 times the previous record from 2009, exceeding the gross domestic product for the first time since World War II. Both presidential candidates have proposed trillions of dollars of additional debt should they win. The total US government debt is at $27 trillion.

ProPublica ponders how the CDC — the agency that defeated smallpox globally and polio in the US – is widely perceived as being ineffective during COVID-19. The publication concluded after speaking to former and current employees that: (a) the White House meddles in its work by emphasizing politics over science; (b) CDC’s top leadership is ineffective and caves under White House pressure; (c) CDC fumbled the early rollout of COVID-19 tests, allowing the pandemic to spread unchecked; (d) CDC’s budget was reduced, which forced it to reduce its global involvement; (e) the White House blames Director Robert Redfield, MD for China’s lack of COVID transparency; (f) CDC has been sidelined as the president publicly rejects science with inaccurate claims and the touting of unproven cures; (g) CDC ceded to White House demands to downplay public health concerns about testing, cruise ships, school re-openings, and religious gatherings, which forced CDC to reverse its publicly announced guidelines; and (h) the White House shut down CDC’s hospital data tracking system and turned it over to TeleTracking.

A New York Times article reminds that no test can determine whether someone who has had coronavirus is still contagious, even as recently recovered politicians and football coaches return to public gatherings claiming that their negative tests prove they can’t infect anyone. A physician commenter also notes that one of the many things that nobody knows about coronavirus is how much viral load is needed to be infectious. Studies are beginning to shore up the argument that higher levels of viral load drive poorer outcomes, but not the level of infectiousness or the severity of symptoms. 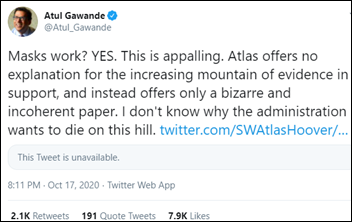 Twitter removes a tweet in which White House coronavirus advisor and neuroradiologist Scott Atlas, MD made misleading claims that masks are ineffective for reducing coronavirus spread, citing a libertarian think tank’s article. Atul Gawande, MD, MPH listed studies on Twitter that prove the effectiveness of masks. Atlas also said in a Thursday interview that COVID-19 testing should be used only to protect vulnerable populations, that large-scale testing and isolation programs infringe on civil liberties, that testing people without symptoms is “destroying the workforce,” and that herd immunity will be reached once 20-40% of Americans are infected. He previously said that increased testing is “a fundamental error of the public health people perpetrated on the world.” 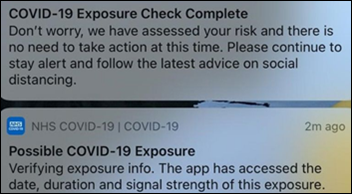 In the UK, NHS updates its COVID-19 tracing app following user complaints that it gives them an exposure warning that simply disappears when pressed with no further instructions. NHS says the message is coming from IOS and Android security. The update cause a second message to pop up that says to ignore the first one.

A Texas man who was angry at a surgeon — whose practice charged him $115 for a copy of his medical records after cancelling his surgery because he hadn’t followed pre-op instructions — is indicted for online impersonation for posting the doctor’s cell phone number in Craigslist ads. The man initially admitted only to calling the doctor’s cell phone at odd hours with caller ID blocked, but he later later told detectives that he posted ads that were either sexually suggestive or that offered free Doberman puppies, in both cases specifying that calls and texts would be accepted only after 10 p.m. Craigslist records indicated that he had used the platform to complain about the doctor’s business and to ask female readers to send him nude pictures.