I’ve returned from my brief sojourn in the desert. Unfortunately, on my outbound flight, I had my first exposure to a passenger behaving badly.

The last couple of times I’ve been on a plane have been smooth, but this one was marred by a man who wouldn’t keep his mask on his nose. It wasn’t a case of the mask not fitting right with resulting slip. He would wait until the flight attendant walked by, then intentionally lower his mask. He had already been a problem at boarding, when he planted himself in the exit row and took his mask off entirely, claiming he was “hot,” but put it back on when confronted.

After being counseled by multiple flight attendants, he finally complied when they told him he’d have to give up his exit row seat and move to the front of the plane with them. If you’re hale and hearty enough to fly coast to coast, you should be able to wear a mask.

It was fantastic to be in a part of the country where they’re taking COVID seriously. Nearly everywhere we went, people were universally masked and businesses were deadly serious about customers keeping their masks covering their noses and mouths. My community at home is doing unfortunate things, such as having unsanctioned homecoming dances with numbers of attendees that not only exceed county guidelines, but are entirely unmasked. I wish the parents organizing these events could come spend a day in our clinic and see how many families we deal with whose lives are disrupted after the fact by these events, and see how hard the staff works trying to deal with it all. As a physician dealing with COVID all day, it’s grating to see people who don’t understand personal responsibility and how their actions can impact the lives of others.

The small town I was visiting has reimagined their downtown area to promote outdoor dining and distanced socializing, blocking off streets and expanding the footprint for restaurants to serve in-person customers. Given our relatively self-isolating outdoor activities, most of our meals were of the “pull it out of your backpack” variety, but it was nice to get out and do some people-watching on the day we ventured into town. 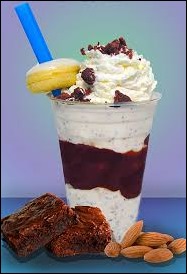 If you’re going to blow your day’s calories on a single item, I highly recommend a shake that comes accessorized with not only whipped cream, but a donut. I saw some sassy boots while window shopping, but refrained from looking further until I have somewhere interesting to wear them. Of course, I could always stroll around my house in them, but it’s just not the same.

My wingwoman on this trip is a surgeon, and given the types of cases she usually does, she hasn’t been doing much telehealth work. She works for a large integrated delivery network where after-hours care is handled by triage nurses, so she was fascinated by the fact that I could log onto my favorite telehealth vendor’s site and have a waiting room full of patients who wanted to speak with a random physician at all hours of the night. I only saw a handful of virtual patients, and only when I received escalation text messages that the patients had been waiting a long time due to a shortage of available providers licensed in one of my states. She comes from a totally different world where the patient population is somewhat captive, so she found the potential fragmentation in care a little unnerving.

There’s still a lot lacking as far as interoperability between telehealth vendors and the rest of the teams that care for the patients they serve. At best, the patient’s local physicians receive a PDF document or a copy of the patient’s care plan. At worst, they receive nothing. In order for third-party telehealth platforms to be a robust part of patients’ ongoing care, they’re going to have to reach a level of interoperability that’s on par with the capabilities of certified EHR systems used by those other providers. They’re also going to have to execute on those capabilities. I know those vendors (and their shareholders and investors) don’t want to hear about the amount of money it’s going to take for that to happen, but it’s the right thing to do for the patient.

For me to be an effective telehealth urgent care physician, I need an current copy of the patient’s medication list and problem list, not just what they recall or what they might have picked from the top of a dynamic picklist because they were in a hurry. I need to have a better picture of whether a patient is compliant or not, and what their local care team has been doing or what they might have already been thinking regarding next steps for a given condition that might impact my short-term care plan. Whether I get that data from a provider’s EHR or some kind of API integration direction with the patient doesn’t make that much of a difference to me, as long as the data is there and comes through in a usable form. For the platforms I practice on, I’m betting it will be months to years before we reach those capabilities unless something changes drastically in the interim.

It will probably be a while before I practice any telehealth since I have quite a few in-person clinical shifts coming up to make up for my time away. I’m pleased to say that my flight home was uneventful, with most passengers sleeping. I think my exit row companion and I were the only ones with our lights on, and he appeared to be working most of the flight just like I was. Seeing a fellow road warrior type back in his natural habitat made me smile.

I’m cautiously optimistic that we can continue to put systems in place that allow people to travel or otherwise move about more freely than they have been, assuming they (or their companies) can afford to do so. However, flu season is just over the horizon, so it will be interesting to see if things stabilize or if we have more challenging days ahead of us.

What’s your over/under prediction for the upcoming US flu season? Leave a comment or email me.