A GAO report finds that lack of integration of state prescription drug monitoring program tools with EHRs is the key challenge in PDMP use for patient care, with lookups requiring 3-5 minutes without integration versus 2-15 seconds with.

Physicians said PDMP access helps them detect doctor-shoppers and also helps them avoid prescribing duplicate drugs or ordering doses that are too high when taken with other drugs.

Most of the 31 doctors who were interviewed said their PDMP is not integrated into their EHR.

They also reported that they could not access the PDMPs of other states, that dispensing records from opioid treatment facilities and the VA aren’t always included, and that PDMP searches are hampered by patient matching problems.

A reader asked me to note that Nordic VP Pat Hingley will hit the 50-year mark in her healthcare IT career Friday, going all the way back to her teen job as a full-time “data processing” employee who rigged an IBM 402 accounting machine (a punch card reader with an integrated printer) to produce clinic reports (gifters: the 50th calls for gold). Congratulations to Pat. Is anyone else out there hitting their health IT semicentennial?

Nordic acquires Netherlands-based EHR consulting firm Tasman Global, which expands the company’s reach into Europe and Asia. Tasman founder and CEO Adrienne Flatland was a Willow implementer at Epic for seven years, then started the company in 2015.

Walmart will offer Medicare Advantage plans for Georgia seniors that will give them access to its Walmart Health Centers. 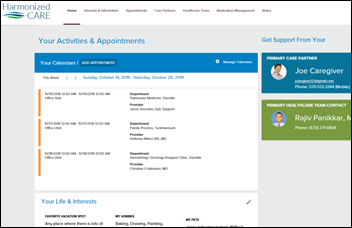 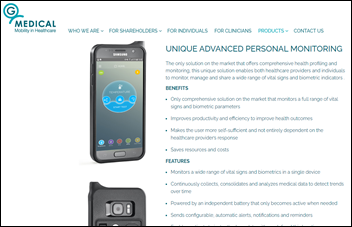 Israel-based personal health monitoring solutions vendor G Medical Innovations files IPO plans that values the company at $329 million. The early-stage company reports annual revenue of $5 million. The company will de-list its shares from the Australian Securities Exchange, which have a market cap of $33 million, before moving to the Nasdaq. One-year performance on the ASX finds company shares down 65% to $0.04. 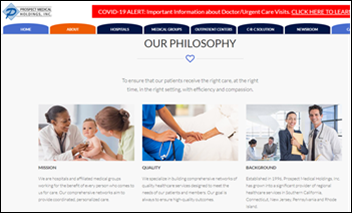 ProPublica looks at a private equity firm’s acquisition and expansion of Prospect Medical Holdings, which it expanded to 17 hospitals and loaded with $400 million in debt, with the PE firm’s CEO and one of his executive peers personally pocketing $222 million. Meanwhile, the hospitals report non-working elevators, ambulances that can’t fill their gas tanks because of unpaid gas card bills, and shortages of medical supplies and PPE because of overdue bills. One of its hospitals had the first COVID-19 death of an ED doctor, who reported being forced to wear a single mask for four days, while another had six COVID patient deaths in a 21-bed locked psychiatric ward due to poor infection control. The chain has been accused of fraudulent Medicare billing and is running out of cash with high debt and a laundry list of hospital quality issues.

FastMed Urgent Care goes live on Epic at its 29 Arizona locations, the first independent urgent care operator to do so. The company’s clinics in North Carolina and Texas are up next in early 2021. FastMed chose Epic in January 2020 and announced last month that it has formed a joint venture with Phoenix-based non-profit health system HonorHealth, which uses Epic, to operate all of its Arizona clinics. 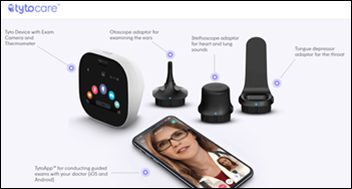 Banner Health reduces unnecessary medication-related decision support and dosing alerts by one-third, working with Cerner Continuous Improvement Delivery to by studying its own alert history and implementing best practices from other Cerner clients.

Specialty pharmacy operator AllianceRx Walgreens Prime will integrate medical data from the recently announced Inovalon DataStream. I spent several minutes reading the announcement and Inovalon’s website trying to figure out exactly what DataStream, ScriptMed Cloud, and Inovalon One do exactly (beyond spawning buzzwords) but I lost interest.

OSF Healthcare goes live on Kyruus ProviderMatch for Consumers on its website. 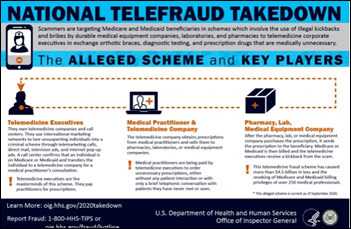 The Department of Justice charges 345 people, including more than 100 medical professionals, with submitting $6 billion in fraudulent medical claims, most of them related to telemedicine. Telemedicine company executives were accused of paying doctors and nurse practitioners to order medically unnecessary medical equipment, genetic counseling services, and pain medications with minimal or no interaction with the patient, then selling the orders to other companies. CMS has revoked the Medicare billing privileges of 256 more medical professionals for their involvement. 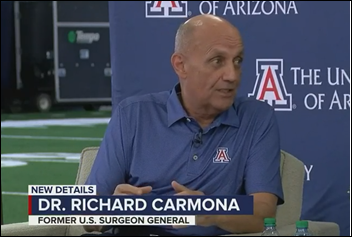 Bloomberg describes the coronavirus precautions used by the University of Arizona, which include installing tents so students can wait for classes outdoors in the shade, sending student health ambassadors around campus in golf carts to hand our masks and to offer distancing reminders, requiring returning students to take a rapid coronavirus test, and performing daily wastewater analysis to quickly identify dorms in which someone is infected. The program was designed by 17th Surgeon General of the United States Richard Carmona, MD, MPH, who is a public health professor at the university. He dropped out of high school to join the US Army Special Forces as a medic and was decorated for combat in Vietnam. He earned a GED, completed a nursing program, then attended UCSF to earn undergraduate and medical school degrees and later University of Arizona for an MPH. Carmona has practiced as a paramedic, RN, surgeon, and deputy sheriff and has held leadership roles in emergency services, hospitals, and the Pima County, AZ health system. He issued the Surgeon General’s report on the effects of second-hand smoke.

Cornell researchers find that President Trump is the single largest driver of coronavirus misinformation that has appeared in major English language news outlets around the world, which they found ran false information – often without the publication’s own commentary or correction — about miracle cures, political conspiracy theories, and Anthony Fauci, MD. Mentions of the President made up 38% of the overall “misinformation conversation.” Just under 3% of articles contained falsehoods. 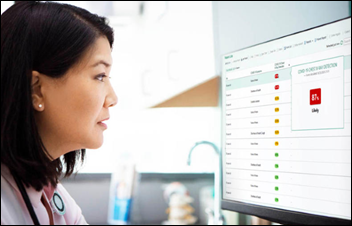 University of Minnesota researchers develop an Epic-integrated AI algorithm that can diagnose COVID-19 from chest X-rays, which Epic and M Health Fairview will make available to all Epic sites without charge. All 12 M Health Fairview hospitals are using it.

Northwell Health develops a COVID-19 early warning system that analyzes patterns in its website traffic to predict demand for staffing and supplies. It says the two-week prediction has tracked closely to actual caseload so far, adding that it will offer the source code to other health systems who have the expertise to convert it to work with their own websites.

The CEO of Pfizer says in a company memo that he is disappointed that political rhetoric around coronavirus and vaccine development is “undercutting public confidence,” adding that despite the $2 billion the company has risked in not accepting money from any government, it will not succumb to political pressure to release a vaccine either faster or more slowly than “the speed of science” allows.

Two companies that were developing at-home, antigen-based saliva tests for coronavirus have abandoned those plans, as public health experts say it was naive to think that the virus antigen would predictably collect in the mouth. Saliva seems to work for PCR testing, but those tests are subject to testing material shortages and require hours to provide a result.

The US government turns distribution of remdesivir back over to its manufacturer, Gilead Sciences. The drug, which has proven to be modestly useful in shortening COVID-19 hospital stays without reducing deaths and whose development was partly paid for by US taxpayers, costs $3,120 per course of treatment. The company will make at least $9 billion in 2020-21 since its manufacturing cost has been speculated to be less than $1 per vial. 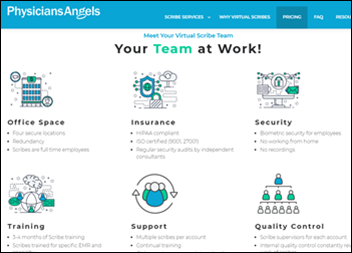 Kaiser Health News covers the offshore scribe industry, where young, aspiring healthcare professionals in India toil overnight their time to create EHR documentation of US office visits. Augmedix recruits college graduates who can pass tests for English reading, listening comprehension, and writing, then sends them to a three-month training program that covers medical terminology, anatomy, and physiology and then takes them through mock visits. Scribes there earn an average of $500 per month, 20% of what their US counterparts are paid, and their time is billed at $12 to $25 per hour. Companies say remote scribing is a small but growing part of the market. Doctor-owned Physicians Angels offers audio-only services (saying that video is intrusive to patients and scribes should be paying attention only to what the provider verbalizes), says it can’t be breached since scribes enter information only in the client’s EHR, completes charts the same day since anything else is just a transcription service, and offers a no-obligation trial for 30 days at $15 per hour. The company’s founder and CEO is a Toledo-based, US-educated otolaryngologist.

Canada-based preventive health operator Medisys Health Group pays a ransom to restore the data of 60,000 of its patients. The company is owned by digital health solutions vendor Telus Health, which bought the chain from its private equity owner in August 2018 for $100 million. Parent company Telus, a telecommunications vendor, offers cybersecurity services. 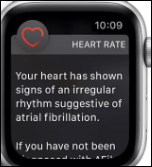 Mayo Clinic researchers find in a small study that 85% of people who receive an atrial fibrillation warning from their Apple Watch don’t end up with a corresponding diagnosis, leading them to warn that such widespread screening is likely causing overuse of healthcare resources from the “worried well.” They also observe that 8.7% of the patients who reported Watch AF warnings were under 22 years of age and 22% had known atrial fibrillation, meaning that they should not have been using the Apple technology per FDA guidance regarding use cases that have not been studied.

Campbell County Health (WY) receives a $1 million insurance settlement toward an estimated $1.5 million in cost for a September 2019 ransomware attack that wasn’t fully resolved until December 2019.