The 360-employee company’s “AI workforce” has been adopted by 600 hospitals. One of its investors is Ascension Ventures.

The company, formerly known as CrossChx, offers AI-as-a-Service, in which an annual price covers scoping, implementation, support, and ongoing optimization. Its Deep Purple taps the collective data of its customers to model the network-wide impact of promising solutions.

Founder and CEO Sean Lane is a former US Air Force captain and National Security Agency intelligence officer who has founded several companies.

From Anti Autocorrect: “Re: Phil Ehr for Congress. Wonder how many times he has become Phil Her for Congress?” The Florida candidate invites supporters to join the “Ehr Force,” which suggests his name is pronounced “Air.” I’m sure we can all have fun thinking up punny ways like Phil’s to sound out “Ehr” as “Air,” such as calling a company an “Air Vendor.”

From Where My Testers At?: “Re: Epic’s latest Rover update. Requires nurses to key in the full date and time on the MAR since the shortcuts ‘T’ for today and ‘N’ for now have been removed. One more straw on the back of already-burdened nurses. Amazing that the testing protocols aren’t robust enough to pick this up.”

From IT Analyst: “Re: Signature Healthcare (MA). Went live with Meditech Expanse for Ambulatory on 9/16, replacing Allscripts Touchworks, which had been in place for 10 years.”

About 60% of poll respondents have participated in a virtual conference and just over half of those would recommend that others do so. Two-thirds of those who have not participated say they are unlikely to do so down the road. Those respondents who provided positive comments say that it’s nice to be able to work during the sessions and not lose travel time, organizers are getting better at mastering digital conferencing tools, and the format allows attendees and vendors to participate in conferences that would have been impossible previously due to cost and logistics. Those with less enthusiasm say they miss the feeling of connection, they don’t like presenters who sit at home in casual clothes delivering death by PowerPoint, technical glitches seem to occur frequently, and presenters have not always rehearsed using the actual delivery technology and fumble during their moment in the spotlight.

New poll to your right or here, in a related question suggested by a reader: For companies that have participated in a virtual conference’s exhibit hall, were you satisfied?

Listening: new from Declan McKenna, a startlingly good 21-year-old English singer-songwriter who turns out polished music that sounds like a combination of the Beatles, Neil Young, and David Bowie but with lyrics that often fall into the protest song category. People this young aren’t usually capable of writing wry words like this on climate change in what seems to be a shot at Elon Musk: “Everybody gets so tired of hearing what you said, When you think your money’s gonna stop you getting wet, So Noah, you best start building, You better have ten thousand children, Because everybody wants to be one.” His band mates look like kids who are awkwardly pretending to play after school in Mom’s garage, but ears are a better judge than eyes. You could play the new album “Zeros” and immediately get into it like I did, but I think it would remain interesting after several plays. I hope his handlers keep bad influences away so that he has a long, productive career onto which we can hitch a ride.

September 30 (Wednesday) 11 ET. “The Hidden Threat: New Research on Security Vulnerabilities and Privacy Gaps in Healthcare Apps.” Sponsors: Verimatrix, NowSecure. Presenters: Neal Michie, MEng, director of product management, Verimatrix; Brian Lawrence, direction of solution engineering, NowSecure. The presenters will present research on the security risk profile of 1,000 healthcare apps in managing patient privacy, how they compare to those in other industries, and where the biggest vulnerabilities lie. Attendees will learn how to make their healthcare apps more secure in managing protected health information.

HHS Secretary Alex Azar bars the FDA from signing any new rules, including those related to vaccines, ordering in a memorandum that such power is now “reserved to the Secretary.” Observers say the timing will raise concerns that Azar is muzzling FDA Commissioner Stephen Hahn, MD to prevent vaccine-related surprises or obstacles before the election.

A New York Times investigation finds that controversial new CDC guidance – which advises that symptom-free people shouldn’t be tested for COVID-19 even if they are known to have been exposed — was written by HHS and posted to CDC’s website over the objections of CDC scientists. HHS and the White House coronavirus task force wrote the policy, which reversed previous recommendations to test more people, then posted it to CDC’s website even though it contains errors and recommendations that are not consistent with CDC’s guidance. HHS did the same for school re-opening guidelines that were posted to CDC’s site without its involvement. The original recommendation was restored this weekend in what was listed as a “clarification” that clearly says the opposite of the guidance it replaced in urging for symptom-free people who have been exposed, “You need a test.” 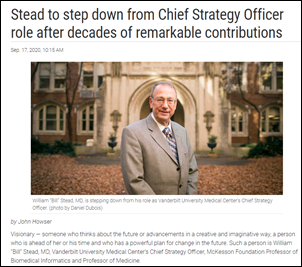 William “Bill” Stead, MD, professor and chief strategy officer of Vanderbilt University Medical Center, will retire from the medical center’s senior leadership team after a 29-year career. He will remain on the faculty of the Department of Biomedical Informatics. Stead has directed the Informatics Center, served as CIO, was the founding chair of what was originally called the Division of Biomedical Informatics, directed the biomedical library, was chair of Vanderbilt Center for Better Health, and was chief information architect. He was the founding editor-in-chief of JAMIA, was president of the American College of Medical Informatics, and chaired the Board of Regents of the National Library of Medicine. He got his start as a work-study undergraduate student at Duke University, where he got himself assigned to a heart research project that included the university’s first minicomputer, then started medical school and research under fellow informatics pioneer Ed Hammond, PhD.

Bluetree’s integrated team approach helps healthcare providers realize higher returns from their Epic EHR. Since 2019, Bluetree operates as an independent subsidiary of Providence. It received Inc. Magazine’s Best Places to Work award in 2019 and has a client base of more than 155 health systems nationwide, including all 10 organizations listed in the 2020-21 US News and World Report Best Hospitals Honor Roll rankings.