From Count Chocula: “Re: women on executive teams. It seems you have a threshold, so what is the right number?” I don’t know, other than it isn’t zero, but I would question the culture of a company that doesn’t at least have 30% female executives listed on its “about us” page. They can hire whoever they want, but we on the provider side are also free to choose vendors whose practices align with our beliefs and expectations. The percentage of women executives in a few companies I checked: Meditech 43%, Cerner 36%, Allscripts 35%, Change Healthcare 25%, Cognizant 8%, Athenahealth 23%, Nuance 27%, and NextGen Healthcare 27%.

From Frontliner: “Re: our continuing abysmal public health and Infectious disease management supply pipeline. Children’s Health in Dallas can’t get microbiology culture supplies due to national shortages, so they are sending stool samples for E. coli testing to a reference lab, which adds 2-3 days to the turnaround time.” I’m skeptical of just-in-time inventory practices — it has been many years since interest rates and thus inventory holding costs were high enough to make the faddish practice worthwhile. MBA consultants pushed holding inventory measured in days or even hours, a mostly pointless logistical exercise that stops being harmless when supply chains are disrupted or demand increases, as we saw with hospitals desperately bidding against each other for PPE. Similarly, aggressively managed hospital staffing practices created labor shortages and excessive traveling clinician costs when faced with similar resource supply challenges. Frontliner and I conclude that making healthcare a free-market system run by profiteers hasn’t proven to be in the best interest of its customers (which includes all of us at one time or another). Imagine a country whose healthcare non-system is so broken that the only way we can come  up with to reduce crippling drug prices is to import them on the sly from smarter countries (watch your prescription prices, Canada, because we’re going to drive them up), beg for help with medical expenses via crowdfunding sites, and leaving a large chunk of the population unable to afford either health insurance or health services costs, making bankruptcy a key component of most care plans.

From Mark Edelstein: “Re: HIStalk. I finally retired after a 40-year career in health IT, which included time with GerberAlley, Initiate Systems, Phamis, SMS, GTE, and RelayHealth. Reading HIStalk each day these past several years has really been a pleasure and has kept me so informed and educated , well beyond what knowledge I was able to uncover on my own. You have great energy and offer a terrific product. Keep it going!” Thanks and happy retirement (a.k.a. not the rocking chair, but rather the next phase of doing interesting work) to Mark, who is co-founder and executive director of MedGift, which encourages folks to “skip the flowers” for someone who is starting a care journey and instead use its platform to offer financial and emotional support through their support page. I hear occasionally from readers who no longer work in health IT, having either moved on to other industries or to retirement, but who still follow the companies and people that were once important in their daily lives.

Welcome to new HIStalk Platinum Sponsor SOC Telemed. The SOC in the name of the Reston, VA company stands for Specialists On Call. It’s the largest national provider of telemedicine technology and solutions to hospitals, health systems, post-acute providers, physician networks, and value-based care organizations. Its proven, scalable, enterprise-wide platform Telemed IQ – which powers 850 facilities and eight of the 10 largest US health systems an integrates with the Big Four inpatient EHRs – offers  rapid deployment of optimized, sustainable telemedicine programs using the health system’s own clinicians. The company also provides neurology, psychiatry, and ICU telemedicine solutions that are staffed by its 200 board-certified clinicians. SOC was the first provider of acute clinical telemedicine services to earn The Joint Commission’s Gold Seal of Approval and has maintained that accreditation every year since inception. It helps health systems be the provider of choice, improve the patient experience, obtain or maintain accreditation for stroke and other programs, improve operational and clinical performance, and maintain clinician work-life balance. Customers include AdventHealth, Banner Health, Beth Israel Deaconess Medical Center, and WellStar. Thanks to SOC Telemed for supporting HIStalk. 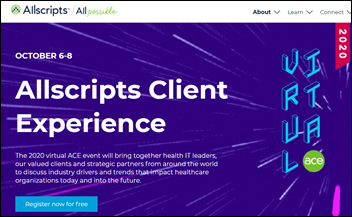 Meditech partners with AHIMA and hosting provider Sisu Healthcare Solutions to expand use of its Expense EHR as the flagship EHR in AHIMA’s online training environment for 16,000 students in 300 colleges and universities. 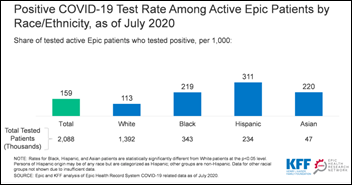 Analysis by Epic Health Research Network and Kaiser Family Foundation finds that people of color are more likely to test positive for COVID-19 and to require a higher level of care compare to white patients. Black, Hispanic, and Asian people had higher rates of infection, hospitalization, and death.

President Trump says CDC Director Robert Redfield, MD was confused and mistaken when he told a Senate subcommittee that distribution of a COVID-19 vaccine will likely happen in late spring or early summer, a timeline that other federal health officials agree is reasonable. Vice-President Pence told Fox News on Wednesday that the administration’s goal is to have 100 million doses available by December 31. The President also disputed Redfield’s statement that wearing masks could be more effective than a vaccine in some cases. 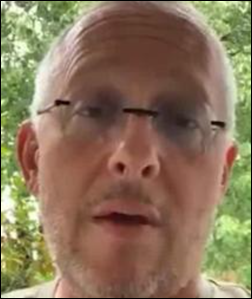 HHS spokesperson Michael Caputo takes a 60-day medical leave of absence after five months on the job following a Facebook Live video rant in which he claimed that CDC’s scientists “don’t want America to get well,” urged supporters of President Trump to arm themselves, and said that “my mental health has definitely failed.” Caputo previously admitted that he has never actually read CDC’s Morbidity and Mortality Weekly Report even though his team demanded to edit each issue to make sure that its scientific content does not conflict with White House statements.

In England, a leaked document shows that top leadership of NHS Test and Trace includes just one clinician or public health expert. 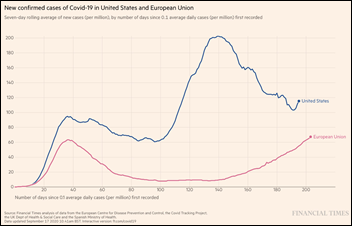 WHO warns that COVID-19 cases are rising alarmingly in Europe, exceeding their previous March peak with 300,000 new cases reported last week. The US reported 261,000 new cases in the past week as deaths approached 200,000.

Texas health officials admit that the method that has been used to report COVID-19 test positivity rate has understated the level of spread, encouraging officials to justify the re-opening of bars, restaurants, stores, and child care centers. The state now uses the date that a test was administered rather than the date it was reported, which means that the seven-day positivity rate was 8.4% instead of 5.84% when the re-opening decision was made. The governor ordered bars to be re-closed and masks to be worn on June 26, when the reported positivity rate was 13.7%, but it was actually 18.5%. Governor Greg Abbott announced Thursday that business in most regions will be permitted to operate at 75% capacity and nursing homes can accept visitors starting next week, but bars will remain closed. 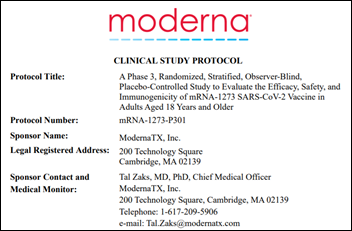 Moderna provides details of how it will conduct and evaluate clinical trials of its COVID-19 vaccine, responding to scientists who have called for more transparency. The document suggests that the company won’t really know whether the vaccine works until spring, but will seek emergency FDA approval if the first data review sometime in October through December proves its effectiveness. Later Thursday, Pfizer also released its vaccine protocol.

Forbes says that Epic founder and CEO Judy Faulkner is among the members of its Forbes 400 whose net worth increased the most in the past year, estimating that she gained $1.7 billion to hit $5.5 billion. 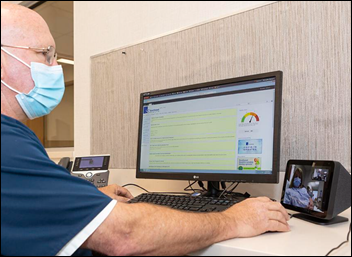 Optimum Healthcare IT provides professional staffing services as well as consulting services that encompass advisory, EHR implementation, training and activation, EHR optimization, community connect, managed services, enterprise resource planning, security, and ancillary services – supporting our client’s needs through the continuum of care. Our organization is led by a leadership team with extensive experience in providing healthcare staffing and consulting solutions to all types of organizations.