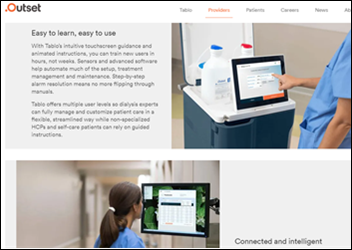 Outset Medical, which offers a portable, cloud-connected home dialysis machine that can integrate with EHRs, files for a $100 million IPO.

The only connection required for the touchscreen-operated, sensor-managed portable machine is a wall outlet and tap water that it uses to create its own dialysate.

The company has raised $450 million, most recently $125 million in a Series E funding round earlier this year.

From Puzzled PR: “Re: partnership press release. Why didn’t you mention our announcement?” I ignore any announcement that I can’t figure out within 15 seconds, including this infuriatingly imprecise one that has puffed some sort of “partnership” to the point I can’t tell who (if anyone) actually bought something. I doubt it was newsworthy anyway, but I honestly couldn’t tell. Too many PR cooks spoil the announcement broth in rendering simple statements such as “what does this company do” into intentional inflated gibberish in shooting for high-falutin’ prose and instead hitting their own foot. I typically don’t mention partnership announcements (because who cares?) and I also pass on “news” items that affect only existing clients who surely be contacted individually anyway. The folks whose committees ruin clear communication by over-polishing it always seem shocked that the rest of the world doesn’t take notice, either because they couldn’t figure it out or it was of minimal value even before being butchered.

A possibly surprising 60% of provider employees who registered for HIMSS20 say they won’t attend HIMSS21 even if COVID-19 isn’t a factor by then. Most respondents, based on what they know today, have already made plans one way or another, with few of them saying they don’t know yet.

New poll to your right or here, repeating one I did in the pre-COVID days of last summer that seems like years ago: what’s better about your life now compared to a year ago? 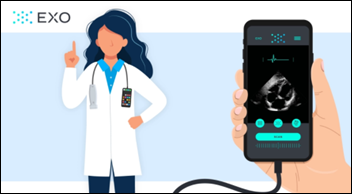 Handheld ultrasound device manufacturer Exo raises $20 million in a Series B round, increasing its total to $100 million. The company will launch the device and its workflow software over the next few months in the US. 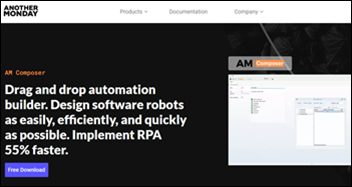 A US appeals court reduces the $280 million in punitive damages that Tata Consultancy Services had been ordered to pay Epic in a 2014 trade secrets lawsuit, saying that $140 million is a reasonable figure. Tata continues to fight the lawsuit, arguing that it did not misuse the information that its consultants were accused of copying from Epic’s UserWeb while claiming to be Kaiser Permanente employees. The original jury award was $940 million, which was lowered to $420 million to comply with Wisconsin state caps on punitive damages. Epic accused Tata of stealing its intellectual property to improve its competing product Med Mantra. Tata employee Philippe Guionnet, who managed the company’s contracts with Kaiser, was the whistleblower who conveyed his suspicions to Epic. 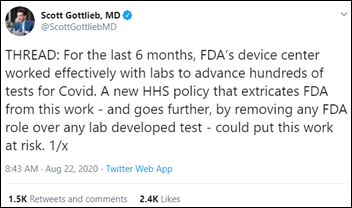 Former FDA Commissioner Scott Gottlieb, MD warns that a new HHS policy that removes FDA’s authority to oversee lab-developed tests will lead to direct-to-consumer tests that operate without FDA oversight and will leave FDA with no authority to take enforcement action against bad tests. FDA had traditionally not actively regulated such tests anyway, but now will be unable to work with test makers to improve quality in the absence of a process that was working.

FDA will reportedly authorize the use of convalescent plasma from recovered patients for treating COVID-19 under pressure from the White House on the eve of the Republican National Convention’s kickoff, although its Emergency Use Authorization will make it harder to conduct randomized clinical trials, which have never been performed on the procedure.

California’s infectious disease monitoring system recently went down for 20 days, hampering the efforts of local health departments to manage their pandemic response. The state’s backlog of 300,000 lab tests contained 15,000 that were positive for COVID-19, eliminating the possibility for individuals to isolate themselves and for public health officials to perform contact tracing. An outage in the state’s CalREDIE database prevented delivery of electronic lab reports to counties. Mendocino County performed its tracking by telephone and fax machine as usual, leading to its decision to shut down bars in even though the state’s backlogged electronica data showed the county as doing fine.

An August 7 wedding reception at a Maine inn with 65 attendees – 15 more than state law allows – has resulted in 53 known COVID-19 cases that were discovered by contact tracers. A woman who did not attend the reception died after becoming infected by someone who did.

In Ireland, two high-ranking federal government officials resign and others are under pressure after getting caught attending an 80-attendee golf tournament and dinner that was illegal given the country’s 50-person limit. The newly resigned / fired minister of agriculture, who had held the position for just six weeks, had warned citizens three days before that house parties were spreading the virus and that “COVID loves to party.”

A Catholic hospital in Toronto opens up its Internet content filtering system to allow doctors to access the websites of abortion clinics for patient referrals.

Scientists in China say that their AI algorithm can predict coronary artery disease by looking at a person’s photo for signs of thinning or gray hair, wrinkles, and ear lobe creases.