The Wall Street Journal reports that COVID-19 hospitalization data reporting, which was moved to an HHS system with little warning and with criticism from some members of Congress, will return to CDC’s control under a new system.

HHS denies the report, saying that no plan is on the table to have CDC take over again.

The WSJ article quotes a recent statement from Deborah Birx, MD that it interprets as signalling a move to a new CDC system. It did not read that way to me.

In a possibly related item, Politico reports that the federal government has launched Modernizing Public Health Reporting and Surveillance, a multi-year initiative to improve data quality at state and local health departments. Ideas being discussed include automating hospital and lab reporting, moving to electronic case reporting, replacing data systems, and digitizing mobile coronavirus testing sites. Experts worry that the program will conflict with existing efforts and question whether technologists at the White House’s US Digital Service have the knowledge to solve a problem that has vexed public health officials for years.

I cruised YouTube for Health Triangle videos and found this “Week in Review” series that I think is brilliant, especially given that I have no interest in the usual lame podcasts and videos from industry amateurs. The host is Health Triangle Director of Business Development and industry long-timer Damian David, who delivers a smooth, relaxing news recap and interview that he follows with a remarkably good song performance. Other episodes feature fine covers of “With or Without You,” “Sweet Melissa,” “The Wind Cries Mary,” and “Ring of Fire.”

Listening: new from Bully, which sounds like a new grunge album from Courtney Love and/or Hole. Bully isn’t really a band any more – singer-songwriter Alicia Bognanno did a Courtney in in sending her musical mates packing while keeping their collective moniker. She’s also like Love in being bipolar and thus prone to sprinkling her recordings with therapeutic yelling and growling that makes you happy she’s not mad at you. Bognanno is amused by those who compare her music to grunge, explaining that being born in 1990 means she didn’t exactly grow up listening to Nirvana. 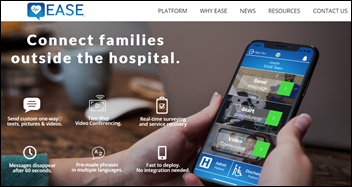 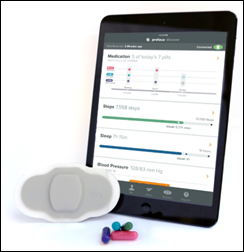 Bankrupt smart pill developer Proteus Digital Health sells its assets to Japan-based pharmaceutical company Otsuka for $15 million. Otsuka had been an investor and partner of Proteus, which pre-bust was valued at $1.5 billion, apparently by folks with unreasonably optimistic expectations. Going down in flames with Proteus is the nearly $500 million poured into it by investors who rode the rocket up and then down through a Series H funding round.

Year-old, China-based health platform operator JD Health raises $830 million in a Series B funding round. The company – which raised $1 billion in November 2019 Series A round that valued it at $7 billion – offers pharmacy delivery, telehealth services, genetic testing, and hospital systems. It processes 100,000 diagnostic inquiries each day and is working on an online family doctor service that will serve up to 50 million families. New investor Hillhouse Capital was founded in 2005 by a Yale graduate with $20 million in seed capital from Yale’s endowment fund and was named after a New Haven street. The investment firm, which focuses on businesses in Asia, runs a joint venture with Mayo Clinic to boost that provider’s influence in China. 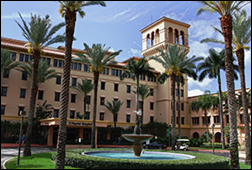 Baptist Health South Florida President and CEO Brian Keeley says the health system will spend upwards of $100 million on a digital transformation over the next several years that will include adding new scheduling and registration capabilities to its Cerner system; investing in analytics; upgrading its website with more patient engagement tools; and bolstering its Amwell-powered Care on Demand telemedicine app. The search for a chief digital officer is underway.

In Australia, SA Health implements interoperability software and services from InterSystems to interface its Notifiable Infectious Disease Surveillance system with new workflow technology as it prepares for future waves of COVID-19.

Higi adds OptimizeRx’s prescription savings and patient educational materials to its Smart Health Stations that are installed in pharmacies and retailers.

Capsule Technologies announces GA of a cloud version of its Ventilated Patient Surveillance workstation that runs on Microsoft Azure.

Researchers find from cell phone data that 7% of workers at a given nursing home also work in at least one other facility, calculating that eliminating such shared staffing would reduce COVID-19 infections by 44%.

The federal government forced companies to manufacture billions of dollars worth of ventilators under the Defense Production Act, but most of them are gathering dust in the national stockpile as COVID-19 treatment protocols de-emphasized their use after a high percentage of intubated patients died and their role in infecting caregivers was questioned. Less then one-fourth of hospitalized COVID-19 patients are placed on ventilators, a big drop from the pandemic’s early days. The federal government says it will either sell or give away dozens of thousands of the devices to other countries.

Pooled COVID-19 testing, which worked well in other countries to reduce the use of short-supply reagents, can’t be used in the US because our infection rates are so high. Partial samples from several patients are combined, the batch is tested for coronavirus, and a positive result triggers re-testing of the retained samples from the batch. Efficiency is good until positivity rates hit 5-10%, at which time the re-testing that is required takes more labor and reagent than testing the individual samples. Experts also question whether the pooled tests miss people with low levels of virus and worry about the extra work that is required for lab techs since robotic processors are overwhelmed. 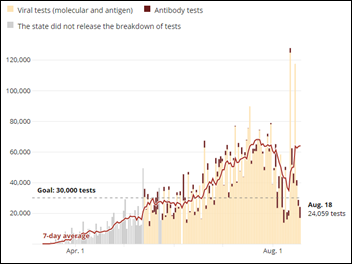 I received a forwarded internal email from Baylor College of Medicine that looked at the Houston metro area’s wildly fluctuating COVID-19 testing numbers, which recently tripled. That turned out to have been caused by a state system upgrade on August 1 that increased doubled reporting capacity, which triggered a big surge as the backlog was being cleared. The email notes that public health has poorly integrated systems and still are sent manual results, including faxes, that someone has to enter.

University of Colorado Health CMIO CT Lin, MD shares numbers on video versus in-person visits since the beginning of the year. In-person visits (purple) dropped off sharply in early March and were outnumbered in a handful of weeks by the virtual visits (cyan), but in-person visits have mostly recovered after the state ended its stay-at-home policy and virtual visits have gone back down. Total visit counts seem about the same now as in January and February, but virtual visits went from essentially zero to about 15% of the total. Extrapolation is always dangerous — especially looking at the seemingly unstoppable telehealth upturn in March — but one might speculate that even though some patients have been forced to discover the convenience and lower infection exposure of virtual visits, they still prefer seeing clinicians in person and having related services provided at the same time. It may also be that either (a) they would rather have an in-person visit, but might have a virtual one forced upon them for one reason or another; or (b) clinicians either get paid more predictably or can offer more services when sitting in the room with the patient. Visits from outside UCHealth’s network also aren’t accounted for, so third-party virtual visits and urgent care might be impacting the numbers. Lastly, it may be that a higher than normal number of virtual visits were due to deferred higher-acuity or chronic disease management services. I would be interested in seeing a drill-down of both visit types by nature of the visit, demographics of the patient, new versus existing patient, categorization of visits by diagnosis and services rendered, and the recency of previous visits.

I missed this earlier as an interesting wearables story. Texas Tech fires its woman’s basketball coach one day after a USA Today investigative report calls out its “culture of abuse” that included forcing players to wear heart rate monitors during games and punishing those whose pulse dropped below 90% of capacity for more than two minutes.