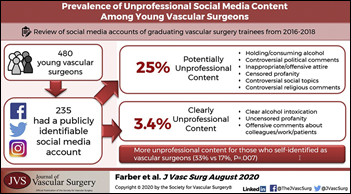 The Journal of Vascular Surgery apologizes for and retracts an article titled “Prevalence of unprofessional social media content among young vascular surgeons.” Some doctors complained that the article was discriminatory and should not have passed peer review.

Three male screeners created fake Facebook, Twitter, and Instagram accounts to search postings from graduating vascular surgery residents – who had not given permission to being reviewed — that contained content they determined was unprofessional and possibly eventually career-damaging. 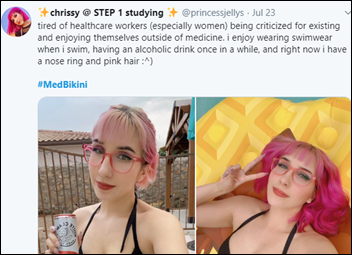 From Twitterati: “Re: digital health startup. An author asked people on Twitter to say what that means to them. You?” The “startup” part leads me to assume that the company has attracted investors, which means they have some (likely overstated) degree of revenue, customers, and future prospects, but also suggests that it is still in need of someone else’s money to shed the “startup” label and make predictable profits, probably from a business model in which someone other than patients pays since the users themselves rarely see enough value in digital health products to want to spend their own money. That depends, of course, who is labeling a company as a startup – fanboys, founders, or excessively exuberant media? Equally soft is “digital health,” which is often in the self-serving eye of the beholder, like badly aging companies in the early 2000s that suddenly declared themselves dot-coms because they put up a website. I have zero experience working in digital health or for startups, but I would be embarrassed as a CEO to hide behind either label in trying to earn a trophy for participating. 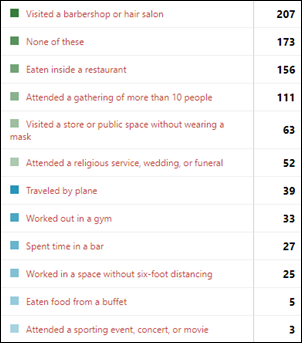 Getting a haircut tops the list of COVID-risky activities that poll respondents undertook in the past month, followed by eating inside a restaurant and attending gatherings. My only transgression was a one-time lunch with a visiting relative in an admirably cautious restaurant, but it was less enjoyable than I expected beyond the nostalgia factor now that I’ve learned to enjoy eating entirely at home.

New poll to your right or here, paying homage to those #MedBikini folks — which existing online information, if any, do you fear could eventually harm your career?

A relative of mine was struggling to pay for her $1,300 per month injectable medication, so her doctor sent her prescription to a legitimate, customer-centric pharmacy in Canada that is best known for providing insulin at a fraction of US prices. They shipped the same brand-name medication for $400. 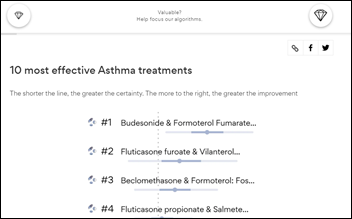 Israel-based StuffThatWorks, which combines crowdsourcing and AI to give actionable data to people with chronic diseases, raises $9 million.

Redox adds access to 500,000 Carequality-enabled physicians to its network, allowing Carequality participants to join the network, exchange clinical summaries, use a simple API to integrate participants and providers, and onboard quickly without going through Carequality’s certification process.

FDA gives emergency use authorization to LabCorp’s home collection COVID-19 PCR test for use in symptom-free people and to be used in pooled sample testing. 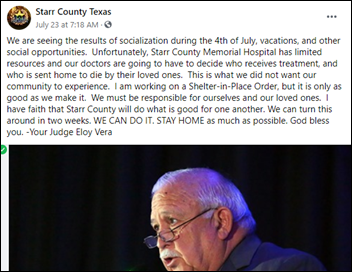 An overwhelmed hospital on the US-Mexico border says that it has formed an internal committee that will decide whether a given COVID-19 patient is treated or sent home to die. It is fascinating to see how ill-prepared or unwilling our health system is to move a patient from an overwhelmed public hospital to available beds in private hospitals and even emergency COVID field hospitals. The percentage of patients who die in the same hospital that they were originally admitted to must be huge since transferring elsewhere, even when medically possible or advisable, has always been  an option that is rarely exercised by either hospital or patient.

CDC issues a strong call to reopen schools two weeks after President Trump criticized its original recommendations as “very tough and expensive.” Insiders say an HHS working group included some of CDC’s original recommendations, but put the mental health-focused Substance Abuse and Mental Health Services Administration in charge of the guidance while excluding the participation of CDC, which was determined to be overly cautious about viral spread. Harvard’s Ashish Jha, MD, MPH says the new document contains no clear information about the risk to students and school staff and does not include a strategy for preventing infection via screening and testing. 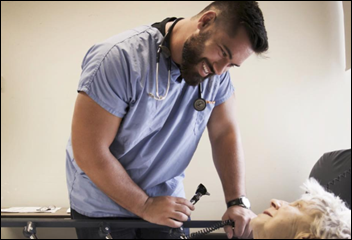 The NFL’s only physician player, Kansas City Chiefs right guard Laurent Duvernay-Tardif, MD, becomes its first player to announce that he will sit out the 2020 season, explaining, “Being at the front line during this offseason has given me a different perspective on this pandemic and the stress it puts on individuals and our healthcare system. I cannot allow myself to potentially transmit the virus in our communities simply to play the sport that I love. If I am to take risks, I will do it caring for patients.” Staying on the sidelines will cost him $2.6 million in salary. 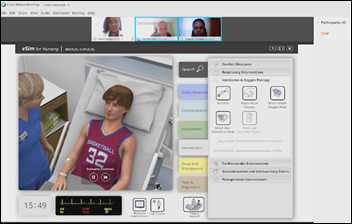 Georgia State University describes how its nursing faculty quickly moved the clinical experience component of its program online using the VSim for Nursing simulator from Wolters Kluwer, which it uses over videoconferencing to allow students and faculty to work together.